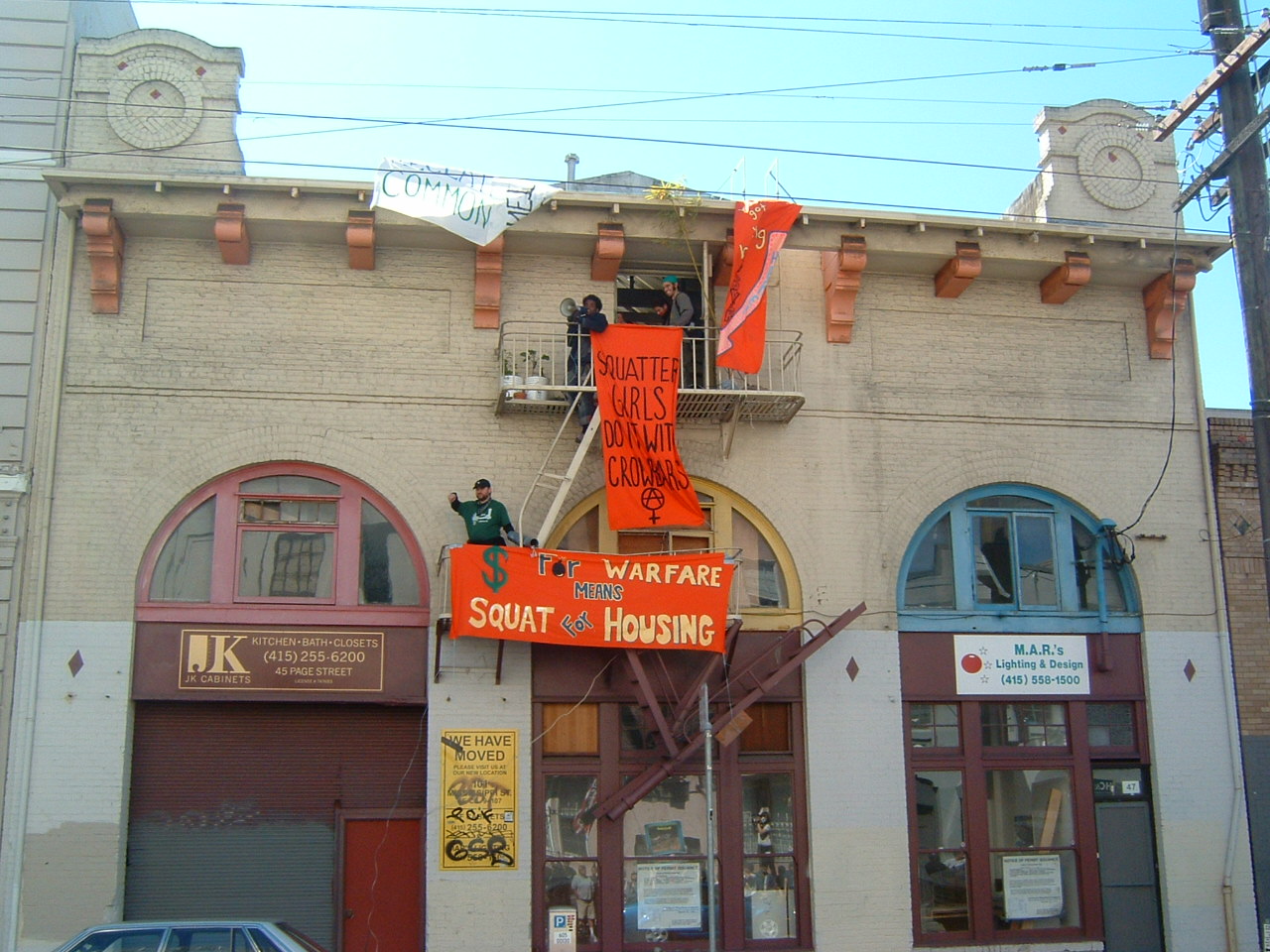 Squatters Demand Government Focus on Housing, Not War
By Liam O’Donoghue
Leary of the chaos that consumed Market Street and much of downtown last year, at the dawn of Gulf War II, swarms of police wearing riot helmets and wielding billy clubs were prepared to contain Direct Action to Stop the War’s 7 a.m. gathering at Justin Herman Plaza and subsequent Bechtel Headquarters protest. But when a sub-group that had continued marching up Market turned onto Page Street, the police where caught off-guard. Occupied by keeping people on the sidewalks, distracted police were unable to prevent a group of about 25 squatters’ rights activists from storming through the entrance of an unoccupied building at 47 Page Street. The Autonomous Collective, a local anti-capitalist group, orchestrated the morning-long stand-off in order to draw attention to the affordable housing shortage and rampant homelessness that continue to plague San Francisco.
“Last night was the first time I slept in a bed in a month,” said Purple, a homeless youth, from inside the cavernous squat. “It’s really encouraging to see people unite to demand shelter, because this place is a lot better than Golden Gate Park. That crazy place is full of junkies who want to fight all the time. It’s not safe, plus if I can’t afford a place to sleep, how am I supposed to afford a ticket for sleeping outside?”
Halting ticketing and harassment of the homeless is a major priority of Autonomous Collective, whose members are also involved in other direct action campaigns related to guerilla gardening, forest defense, and workers’ collectives. Evicted from a squat at 2161 Sutter Street in Pacific Heights last January, members of Autonomous Collective continue to occupy vacant buildings throughout the city, but demand a more permanent solution for San Francisco’s homeless population. Although the high-profile nature of the March 19 protest will almost certainly eliminate the possibility for further use of 47 Page Street, one organizer, Salim McCaron, believes that this confrontation was necessary to further the Autonomous Collective agenda. “It’s a constant cycle of finding places and getting kicked out,” he said, from a fire escape balcony, as 11 individuals were being arrested below for blocking traffic in an act of civil disobedience. “We need direct action to provide shelter for the poor, because the City’s not providing it. This building is scheduled for demolition. Their letting developers gentrify neighborhoods with luxury condos while people are dying in the streets.”
The squatters hoped to make the connection between the anti-war protests and the building takeover clear with a “$ for Warfare means Squat for Housing” banner, which hundreds of onlookers and the mainstream media could see hanging across the façade of the building. The purpose of the small tree adorning the balcony and hay scattered across the sidewalk was not as blatant, but Camala, a bandanna-d squatter carrying several potted plants up to the rooftop, explained, “The Bush administration wants to spend our tax dollars on bombs, instead of housing, education, health care and social services. By growing your own food, you can be less reliant on the neoliberal corporations that facilitate our government’s irresponsible actions, so that’s why we’re trying to start a garden here.”
Within two hours, the squatters were non-violently vacated and the banners torn down by police, but amongst the graffiti and bird shit, the empty mattresses and water bottles, the plants remained. The permits have already been issued for the demolition of 47 Page Street, but maybe one of the squatters will return before the wrecking ball, to gather the plants and bring them to a new rooftop, where a new garden can have a chance to grow. 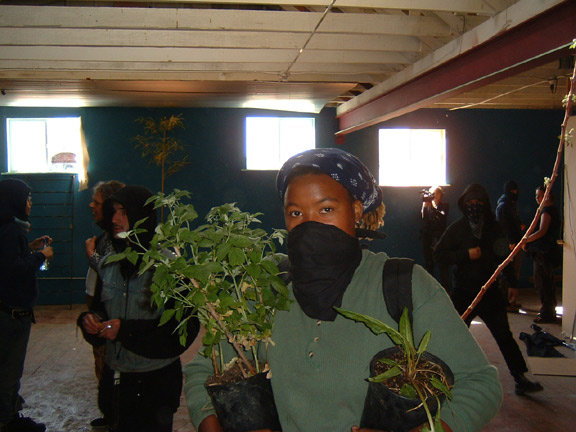 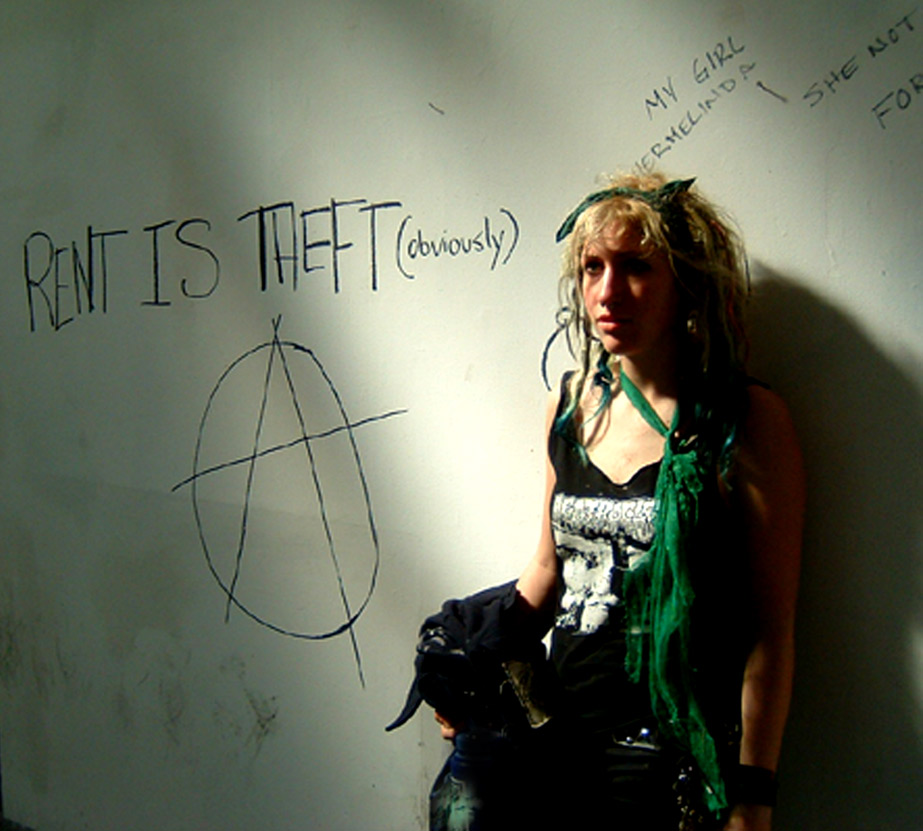 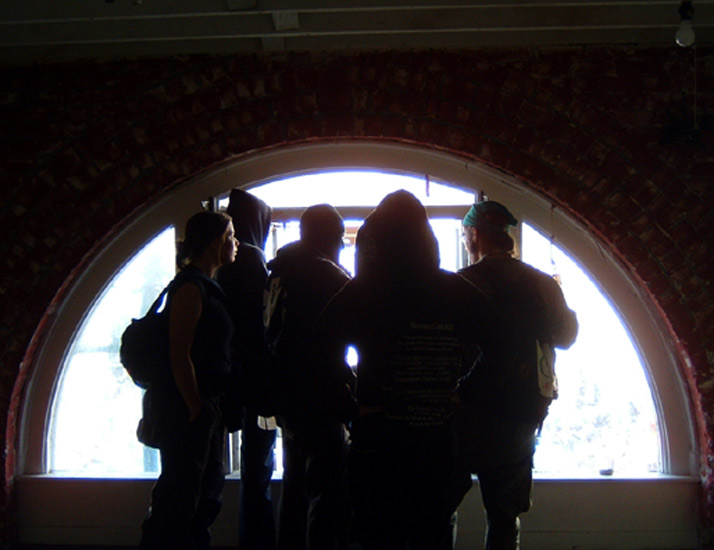 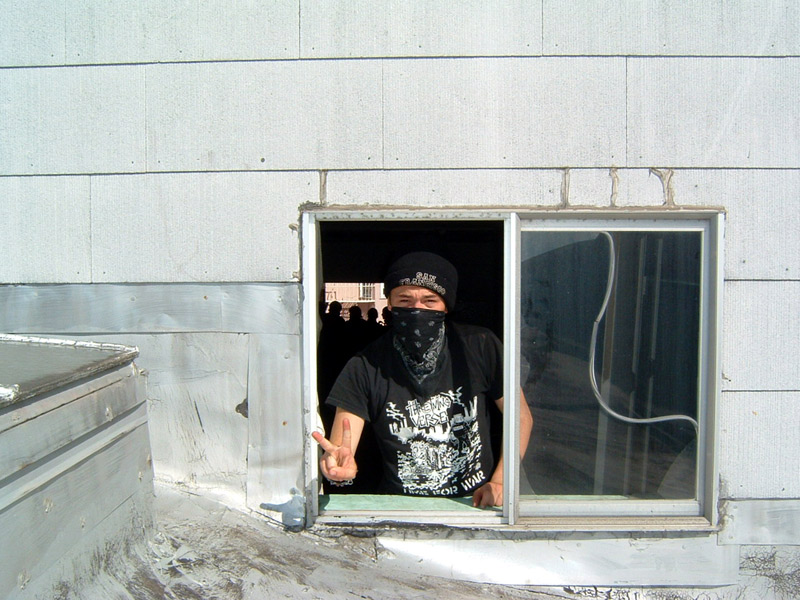 47 Page St.
Add Your Comments
LATEST COMMENTS ABOUT THIS ARTICLE
Listed below are the latest comments about this post.
These comments are submitted anonymously by website visitors.