Newswire
Calendar
Features
Home
Donate
From the Open-Publishing Calendar
From the Open-Publishing Newswire
Indybay Feature
Publish to Newswire
Add an Event
Related Categories: California | Labor & Workers
Taco Bell Truth Tour Rally @ World Headquarters
by JankyHellface & Upton Sinclair (jankyhellface [at] nym.hush.com)
Sunday Mar 7th, 2004 3:50 PM
Coverage of speakers and performers who converged on the world headquarters of Taco Bell in Irvine with hundreds of people from throughout the country to send the company a message. 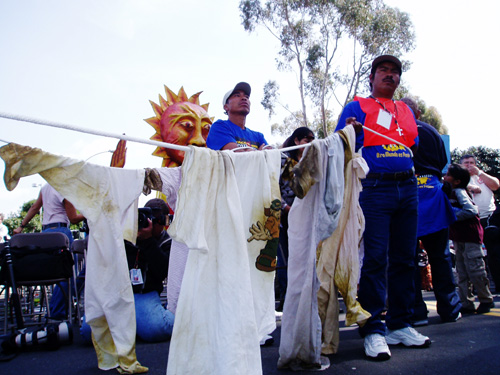 The Coalition of Immokalee Workers take their struggle against the largest restaurant corporation in the world, Yum Brands Inc. and their subsidiary Taco Bell; on the road in an effort to improve living conditions in the tomato fields of southwest Florida. Farmworkers who pick the tomatoes that Taco Bell buys have not received a raise since 1978 and must pick up to 2 tons of tomatoes to make $50. The following rally is the culmination of the second Taco Bell Truth Tour, and comes over 3 years since the official boycott started(April 2001). Read more about the CIWs' efforts to bring Taco Bell to the table to become part of the solution in Florida's farmworkers' fight for dialogue and a fair wage.
http://www.ciw-online.org
§Boots giving Taco Bell the Bird
by JankyHellface & Upton Sinclair (jankyhellface [at] nym.hush.com) Sunday Mar 7th, 2004 3:50 PM 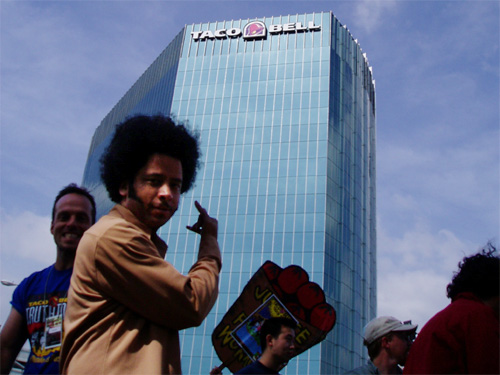 Boots' reminds us what the rally is all about with one simple gesture.
http://www.ciw-online.org
§Making the Bucket Pyramid at T-Bell Headquarters
by JankyHellface & Upton Sinclair (jankyhellface [at] nym.hush.com) Sunday Mar 7th, 2004 3:50 PM 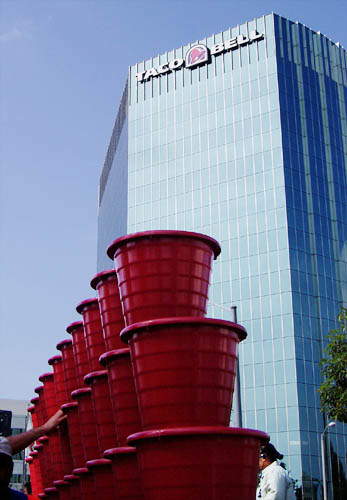 To make $48 in a day at 40 cents per bucket, farmworkers have to pick, haul, and throw 120 of these buckets, which weigh 32 pounds when full of tomatoes -- about two tons of tomatoes, in all.

To give you some perspective on that, $48 is what most fast-food CEO's probably make before their butts hit the leather on their big comfy CEO chairs in the morning 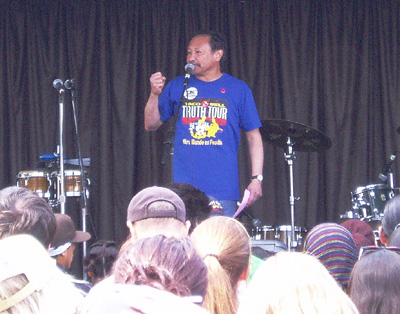 UFW Prez Rodriquez joined the CIW on the last leg of the march from Santa Ana to Irvine, aka Taco Bell world headquarters. He brought us words of solidarity from CIW's brothers and sisters in the United Farm Workers, and urged us to continue to take action for farmworkers both locally and nationally. Boycott the Bell !! Viva La Causa!! 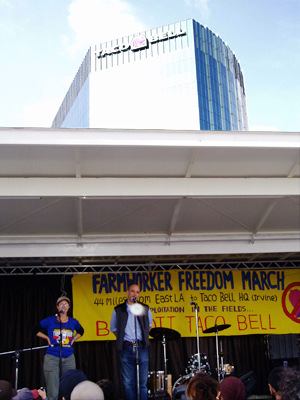 Eric Schlosser author of Fast Food Nation talks about conditions in the fields across the country from north county San Diego to Florida. Eric says conditions are horrible across the country but by far the worst in the tomato fields of south Florida. Says that Taco Bell is not the only responsible party, but can have the biggest impact on the problem as part of the largest restaurant corp. in the world(Yum Brands Inc.). Urges us all to do our part and Boycott the Bell until they help solve the problems that plague those who pick their tomatoes.
http://www.ciw-online.org
§Food First's Anuradha Mittal
by JankyHellface & Upton Sinclair (jankyhellface [at] nym.hush.com) Sunday Mar 7th, 2004 3:50 PM 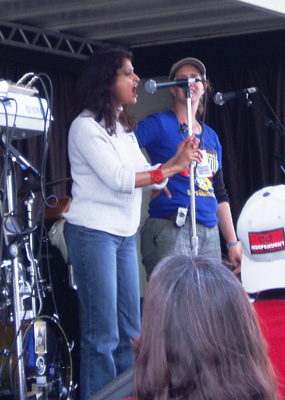 Anuradha Mittal from Food First breaks it down to the crowd. Food First urges us to transform the corporate controlled food system to a life-sustaining and a just food system. Food First staff members joined the Taco Bell Freedom March from East LA to Irvine and kept a journal of their experience on their website. They also helped to raise funds in order for a bus of folks to ride down to the rally at Taco Bell headquarters from the SF Bay Area. Thanks Food First...

Check out the Food First journal at:
http://www.foodfirst.org/ciw/
http://www.ciw-online.org
§Students from Across the Country are Booting the Bell
by JankyHellface & Upton Sinclair (jankyhellface [at] nym.hush.com) Sunday Mar 7th, 2004 3:50 PM 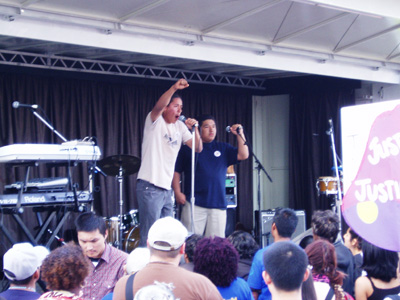 From MECHistas to United Students Against Sweatshops to the Student Farmworker Alliance. Students from across the country and all along the march route from East LA to Taco Bell are joining la Causa. Over 18 colleges and high schools have Booted the Bell off their campuses thus far across the country, and a lot of students are organizing currently to make sure the food served on their campuses is exploitation free. UCLA Taco Bell workers may be the first to be unionized in the nation, and Cal State San Bernadino students and staff came out strong in Irvine to send a mesage to Taco Bell. 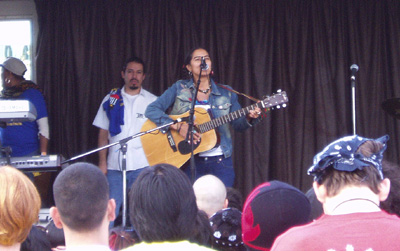 Lila Downs, the Oaxacan-born singer whose hauntingly beautiful voice graced the Oscar-winning soundtrack of the 2002 hit fim "Frida," joined us for the last leg of the march and shared some music with us at the rally in front of headquarters. She urged us all to get in touch with our roots and to support those who harvest the food that we eat. Her support was of particular importance to the many Oaxacan members of the CIW, who were greatly encouraged by her presence.
http://www.ciw-online.org
§Tom Morello, guitar player and founder of Axis of Justice
by JankyHellface & Upton Sinclair (jankyhellface [at] nym.hush.com) Sunday Mar 7th, 2004 3:50 PM 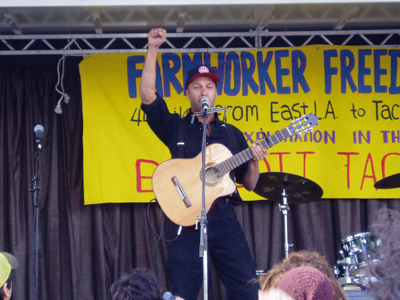 Tom Morello came out to show his support and lend his voice and music to the struggle. Tom recently came off a tour with other radical artists bringing a message of freedom from corporate domination. They played in Miami at the FTAA demonstration with Boots from The Coup and Dead Prez. Tom has supported the CIW for years now and seems to be inspiring more rage these days than he did when he was with Rage Against the Machine. He recently started Axis of Justice with Serj Tankian from System of the Down "to build a bridge between fans of music around the world and local political organizations to effectively organize around issues of peace, human rights, and economic justice." 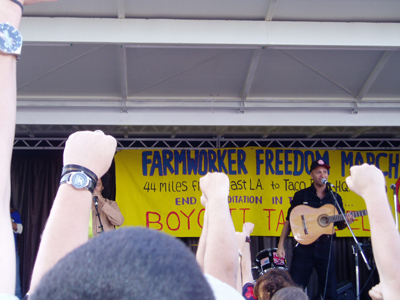 The Nightwatchman is normally Tom Morello of AudioSlave, Serj Tankian of System of a Down, Wayne Kramer, Boots Riley of the Coup; but Boots and Tom Morello were the only ones who performed at the rally in front of headquarters. Boots and Tom performed some of their own material and did a few songs together. "5 Million Ways to Kill a CEO" seemed rather appropriate while staring across the street at Taco Bell world headquarters.

http://www.nightwatchmanmusic.com/
http://www.ciw-online.org
Add Your Comments
LATEST COMMENTS ABOUT THIS ARTICLE
Listed below are the latest comments about this post.
These comments are submitted anonymously by website visitors.