Add an Event
Newswire
Calendar
Features
Home
Donate
From the Open-Publishing Calendar
From the Open-Publishing Newswire
Indybay Feature
Publish to Newswire
Add an Event
Related Categories: Haiti | International | Global Justice & Anti-Capitalism
Thousands of Aristide Supporters Pour Into Streets
by repost
Friday Mar 5th, 2004 4:07 PM
PORT-AU-PRINCE, Haiti (Reuters) - Thousands of outraged supporters of exiled President Jean-Bertrand Aristide poured out of Haiti's slums and into the streets on Friday, marching on the U.S. Embassy to denounce the "occupation" of their homeland and demand Aristide's return. 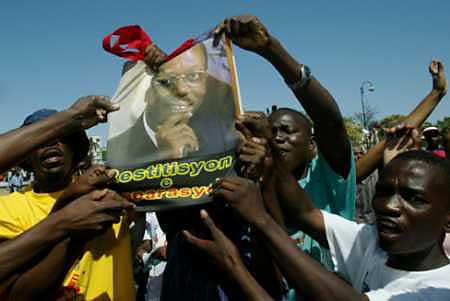 Hurling slurs at U.S. Marines and calling President Bush a "terrorist," a crowd estimated at more than 10,000 materialized in the capital, seething with anger at Aristide's flight to Africa five days ago after a bloody rebellion and U.S. pressure.

"Bush terrorist! Bush terrorist!," chanted the crowd, many of them waving Haitian flags and wearing T-shirts bearing photos of Aristide, as they passed a contingent of battle-equipped U.S. Marines guarding the embassy.

Hundreds held up their hands with five fingers extended, shouting "Aristide five years," the rallying cry of his supporters who wanted him to finish his five-year term in office. U.S. troops watched impassively from the rooftop.

The massive protest came as U.S. and French troops joined Haitian police on patrol in the teeming capital. U.S. military vehicles mounted with machine guns and missile launchers rumbled through the streets, sending a message to rebels and Aristide militants to lay down their arms.

Supporters of Aristide, a former Roman Catholic priest whose fiery oratory from the pulpit helped galvanize a popular revolt that dislodged the Duvalier family dictatorship in the 1980s, had been relatively quiet this week, shocked by the ouster of Haiti's first freely elected president.

They had stayed largely in Cite Soleil, La Saline and the other slums of Port-au-Prince as the armed rebels who helped push Aristide from office roamed the streets, hunting for "chimeres," the most militant of Aristide's supporters.

But as the rebels withdrew from the city following a pledge from their leader, former police chief Guy Philippe, to lay down their arms, Aristide partisans vowed to demonstrate daily for the return of their president. 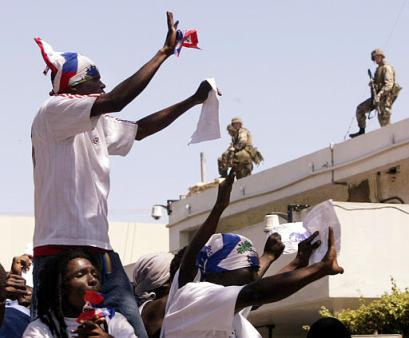 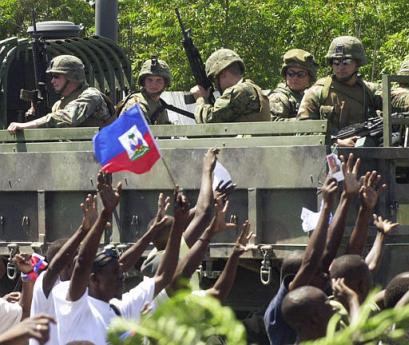 Supporters of former President Jean-Bertrand Aristide march asking for his return near US Marine patrolling near the US Embassy in Port-au-Prince, Haiti Friday, March 5, 2004. (AP Photo/Walter Astrada)
Add Your Comments
Support Independent Media
We are 100% volunteer and depend on your participation to sustain our efforts!