Add an Event
Newswire
Calendar
Features
Home
Donate
From the Open-Publishing Calendar
From the Open-Publishing Newswire
Indybay Feature
Publish to Newswire
Add an Event
Related Categories: Haiti | International | Global Justice & Anti-Capitalism
Haiti Background: Louis Jodel Chamblain
by haiti news
Wednesday Feb 25th, 2004 4:07 PM
Guy Philippe and Louis Jodel Chamblain, both received U.S. help and have been protected by the Dominican Republic's army, despite several requests for their return to face charges in Haiti. The Dominican army receives extensive U.S. assistance, including U.S. advisers near the Haitian border, and a year ago, a shipment of 20,000 M-16 rifles, many of which are believed to be in use in Haiti today. Guy Philippe was a soldier in the Haitian army (FADH) during the brutal 1991-1994 de facto dictatorship. He received specialized U.S. training in Ecuador, and at U.S. insistence was integrated into the top police leadership. He fled in October 2000 after revelations that he was planning a coup with other top police officials. He planned two subsequent coup attempts in 2001.

After the second attempt he was arrested, but later released, by Dominican authorities. 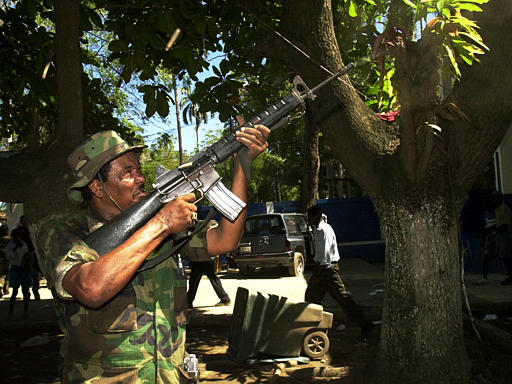 Louis Jodel Chamblain was the number two leader of FRAPH, a violent paramilitary organization founded with U.S. encouragement in 1993. The UN, the U.S. State Department and human rights groups attribute hundreds of murders and tens of thousands of other crimes against humanity in 1993 and 1994 to FRAPH. U.S. government sources have confirmed the claims of FRAPH's top leader, Emmanuel Constant, that U.S. intelligence officials encouraged him in his activities, and paid him a monthly salary (see http://www.theatlantic.com/issues/2001/06/grann.htm). Constant has been allowed to live freely in New York, despite a 1995 deportation order and a 2000 murder conviction. The Dominican Republic allowed both Chamblain and Philippe to operate from its territory.

After Aristide was ousted from Haiti during the 1991 coup d'etat a US Defense Intelligence Agency officer, who he named, urged him to set up a front as a balance to the Aristide movement. This led to the creation of FRAPH in August 1993. Chamblain was the second in command of FRAPH. The FRAPH documents contain papers and photos seized by the US military during their intervention in 1994 which led to the restoration of democracy and the return of President Aristide a short time thereafter. FRAPH maintained offices throughout Haiti and they wallpapered their offices with "trophy photos" of their tortured and maimed victims.

Human rights organizations vary in their reporting of the numbers of persons killed during the repression of the coup d'etat with the range being somewhere between 3,000 to 5,000 victims, a large percentage being attributed to the FRAPH paramilitary thugs. Immediately following the US intervention in Haiti in 1994 the US Embassy spokesperson held a press conference in the central park of Port-au-Prince and attempted to introduce the head of FRAPH, "Toto" Constant, to the press as a legitimate leader of a legitimate opposition group.
The staged event was quickly derailed by Haitians who had just been liberated after three years of brutal repression at the hands of Haiti's military and FRAPH. This attempt to portray FRAPH as a legitimate political organization was immediately denounced and rejected by human rights groups around the world, as well as by the press corps who were all too familiar with the mutilated corpses resulting from FRAPH's repressive maneuvers.

A highly publicized victim of FRAPH's handiwork was that of the machete attack against Alerte Belance, who was dragged from her home in the middle of the night because her husband had been an electoral worker in the 1990 elections which brought President Aristide to power on February 7, 1991. Belance was attacked by men who identified themselves as FRAPH and left for dead on the national highway.
After being assisted by a stunned motorist, she underwent surgery to sew her severed face back together, which had been sliced in half, and her arm had to be removed. She miraculously survived and underwent years of physical rehabilitation. Despite requests by the Government of Haiti that Toto Constant be returned to Haiti to face the justice system, he remains at liberty in Queens, New York and was granted a permit to work. The US government allowed Constant to enter the United States in the mid 90s, although he was a known terrorist.

The US ordered his deportation but never moved to deport him and he remains untouched by the Justice Department's human rights violator program, which has been aggressively deporting other such characters. The Government of Haiti formally requested that the US return the FRAPH documents, arguing that they would be critical to the work of Haiti's Truth Commission at the time and in the investigation of criminal acts committed during the coup period. An international mobilization of individuals, human rights organizations and haiti-interest groups, aggressively campaigned as well for the return of the documents, however the US refused to hand over the documents.
In one of President Clinton's last presidential acts, the FRAPH documents were handed over to the Government of Haiti in early 2000, with the condition that their use be limited to legitimate criminal investigations, as opposed to retribution. They have never been used in the investigation and prosecution of crimes to date. 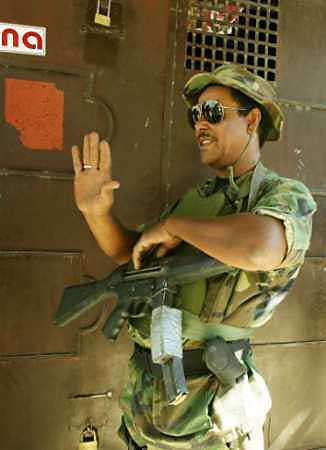 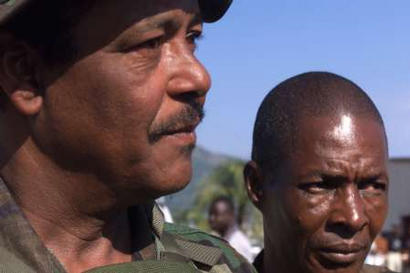 Haitian rebel leader Louis Jodel Chamblain listens to one of his aides at Cap-Haitien airport, February 25, 2004. Chamblain is one of the leaders of the armed rebel movement which controls most of the north of the country and who has vowed to take Port au Prince. REUTERS/Carlos Villalon
Add Your Comments
Support Independent Media
We are 100% volunteer and depend on your participation to sustain our efforts!