Add an Event
Newswire
Calendar
Features
Home
Donate
From the Open-Publishing Calendar
From the Open-Publishing Newswire
Indybay Feature
Publish to Newswire
Add an Event
Related Categories: International | LGBTI / Queer
San Francisco Inspiration To World: Cambodia May Soon Have Same-Sex Marriages
by bbc
Friday Feb 20th, 2004 2:04 PM
After watching television images of gay marriages in San Francisco, the 81-year-old monarch has decided that single sex weddings should be allowed in Cambodia too.
Cambodia's King Norodom Sihanouk has shown that advancing years are no barrier to an open mind and liberal attitude.

After watching television images of gay marriages in San Francisco, the 81-year-old monarch has decided that single sex weddings should be allowed in Cambodia too.

He expressed his views in a hand written message on his website which has proved extremely popular in Cambodia.

The king said that as a "liberal democracy", Cambodia should allow "marriage between man and man... or between woman and woman."

He said he had respect for homosexual and lesbians and said they were as they were because God loved a "wide range of tastes."

Sihanouk, who is currently in Beijing for medical treatment, also said that transvestites should be "accepted and well-treated in our national community."

Such views are not widespread in Cambodia, but the king is hugely revered, although he is a constitutional monarch and has no executive powers.

San Francisco has issued more than 2,800 marriage licences to gay couples in the past week amid a growing debate in the US over whether such unions should be allowed. 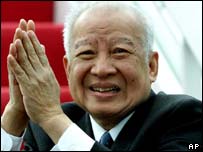 http://www.norodomsihanouk.org/
Add Your Comments
Support Independent Media
We are 100% volunteer and depend on your participation to sustain our efforts!