Add an Event
Newswire
Calendar
Features
Home
Donate
From the Open-Publishing Calendar
From the Open-Publishing Newswire
Indybay Feature
Publish to Newswire
Add an Event
Related Categories: San Francisco | LGBTI / Queer
Gay Marriage In San Francisco
by advocate
Friday Feb 13th, 2004 10:26 AM
San Francisco on Thursday became the only government entity in the United States to grant marriage licenses to same-sex couples. City officials followed a directive set in motion by Mayor Gavin Newsom. By the end of Thursday, 15 same-sex couples had been wed.
Longtime lesbian activists Phyllis Lyon, 79, and Del Martin, 83, were married just before noon by city assessor Mabel Teng in a closed-door civil ceremony at City Hall, mayor's spokesman Peter Ragone said. The two have been a couple for 51 years. Martin and Lyon met in Seattle in 1950 and began dating in 1952. They moved to San Francisco in 1953. The two women founded the Daughters of Bilitis, the first national lesbian rights organization. "Phyllis and I demonstrated our commitment to one another more than half a century ago," said Martin. "Today San Francisco has demonstrated its commitment to us through equality and fairness."

It remains unclear what practical value their marriage license will have, but the symbolism was self-evident on a day when lawmakers in Massachusetts were debating a constitutional amendment that would ban gay marriage. The couple said they were going home to rest and didn't plan anything to celebrate. Still, it was a profound moment for the pair, veterans of decades of gay rights struggles.

Defying opponents, San Francisco marries hundreds more same-sex couples
Weddings were continuing Friday and over the long holiday weekend, and despite the effort by the Campaign for California Families to obtain a restraining order from a judge that would prevent the city from issuing more licenses or officiating at more ceremonies inside the ornate City Hall.
http://www.sfgate.com/cgi-bin/article.cgi?f=/news/archive/2004/02/13/state1320EST0075.DTL

WASHINGTON, Feb. 12 — City officials in San Francisco, a community that has long prided itself on tolerance, began performing marriages today between couples of the same sex in a coordinated political and legal challenge to state law.
By early this afternoon, at least eight such marriages had been performed, and a dozen more marriage licenses had been issued to same-sex couples. The mayor's office said that, starting today, the city will issue marriage licenses to any gay couples who apply.
http://www.nytimes.com/2004/02/12/national/12CND-FRIS.html?ex=1077253200&en=e1803ade0a9f21bb&ei=5062&partner=GOOGLE

SAN FRANCISCO (AP) - City officials have issued marriage licenses to nearly 100 same-sex couples and could unite scores more while opponents are in court Friday seeking to block the nationally unprecedented nuptials.
While the practical value of the marriage licenses remains unclear, their symbolism was evident - especially on a day when lawmakers in Massachusetts debated a constitutional amendment that would strip gays and lesbians of court-ordered marriage rights. As mandated, they adjourned shortly after midnight Friday - but without reaching a consensus.
http://www.guardian.co.uk/uslatest/story/0,1282,-3744751,00.html 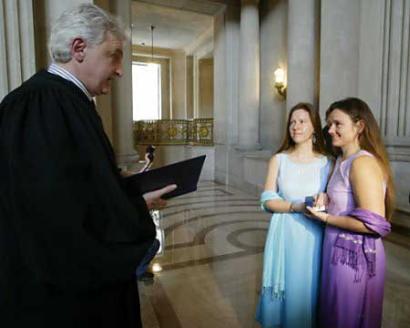 SAN FRANCISCO (Reuters) - Same sex couples, like a joyful Wendy and Tristan Higgins-Goodell who had traveled up from Los Angeles, packed San Francisco's City Hall on Friday to get married ahead of legal challenges to have their unions declared null and void.

"We found out from our friends yesterday afternoon and flew up from Los Angeles last night as soon as we could. We've waited 13 years for this," said Wendy, 45, holding the daughter Tristan, 34, gave birth to last fall via artificial insemination.

"We know there will be a court injunction trying to stop this but this is a right we have just like everyone else. This is for our daughter," she said, adding the couple wants one more child.

An anti-gay marriage group, the Alliance Defense Fund, filed suit for a temporary restraining order to block the issuance of any further marriage licenses and a hearing was scheduled for Friday afternoon. 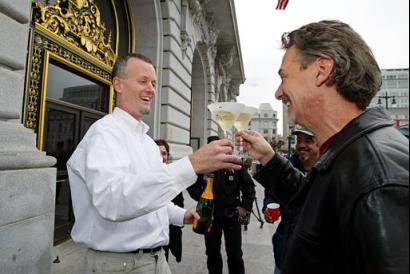 Same-sex couple Kevin Ward, left, and Francis Salmeri, right, both of San Francisco, celebrate with champagne after being married at City Hall in San Francisco, Friday, Feb. 13, 2004. Opponents of gay marriage failed to stop an extraordinary act of ongoing civil disobedience, where under the direction of the mayor, the city has begun issuing marriage licenses to same-sex couples in defiance of state law.
http://story.news.yahoo.com/news?tmpl=story&u=/040214/480/fx11102140019

Opponents of gay marriage failed Friday to stop an extraordinary act of ongoing civil disobedience in San Francisco, where under the direction of newly elected Mayor Gavin Newsom, the city has begun issuing marriage licenses to gay couples in defiance of state law.
Weddings appeared likely to continue through the long holiday weekend despite efforts by the Campaign for California Families and the Alliance Defense Fund to stop them.
http://www.sfgate.com/cgi-bin/article.cgi?f=/news/archive/2004/02/13/state1844EST0148.DTL
Add Your Comments
LATEST COMMENTS ABOUT THIS ARTICLE
Listed below are the latest comments about this post.
These comments are submitted anonymously by website visitors.