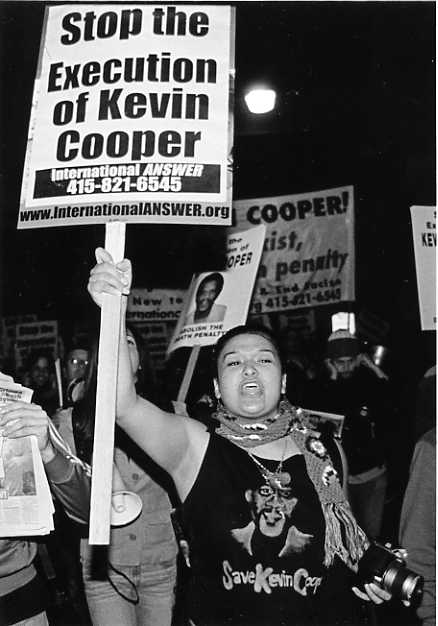 San Quentin State Prison, February 9- In a dramatic change of events, less than 4 hours before his scheduled execution, Kevin Cooper has been granted a stay from death by lethal injection. The U.S. Ninth Circuit Court of Appeals earlier in the day had ruled 9-2 to send the case back to a federal judge in San Diego because of a significant amount of information that has surfaced indicating that San Bernadino police planted and tampered with evidence in order to get a conviction of Cooper for the 1983 deaths of 4 people.

Prior to the ruling Democratic Attorney General Bill Lockyer began an appeal process to petition the Supreme Court to overrule the stay. The San Francisco office of the ANSWER Coalition immediately activated its phone fax and email network flooding the Attorney General’s office to demand he not appeal the lower court’s decision.

Despite the stay, opponents of the death penalty continued their mobilizing efforts to march on San Quentin where Kevin Cooper was in a deathwatch cell 12 feet from the execution chamber. It had become clear when Gov. Arnold Schwarzenegger denied Cooper even the customary clemency hearing that the state of California was hell bent on following through with the execution despite the growing evidence of Cooper’s innocence.

In recent weeks the Cooper case has galvanized progressive forces around the state and has become a focus of attention nationally as well as the sentiment against the death penalty gains momentum. Demonstrations have taken place all over the state including protests at Schwarzenegger’s mansion in Los Angeles. Full-page ads by the Committee to Stop the Execution of Kevin Cooper appeared in the New York Times and several California newspapers. Actors and well known progressive voices have lent their names to stop the execution including Denzel Washington, Mike Farrell, Danny Glover, Anjelica Houston, Angela Davis, Noam Chomsky and many others. Legislators from all over Europe spoke out against the execution including the mayor of Schwarzenegger’s hometown in Austria.

As media trucks lined up tonight in front of the West Gate to San Quentin hundreds of protestors started to march the 1.5 mile march from the Larkspur Ferry to the main gate near the Richmond San Rafael Bridge across San Francisco Bay. The loud and militant demonstration forced the California Highway Patrol to stop traffic in the westbound lane of the bridge. The march had large contingents from the Campaign to End the Death Penalty and the ANSWER Coalition. When the protest got close to the gate of San Quentin they were met by another one hundred cheering anti death penalty protestors as it was announced that the U.S. Supreme Court had refused to intervene.

Speaker after Speaker reiterated that tonight was a victory for the people. The fact that Kevin Cooper was still alive signals that people see the death penalty as not just a flawed system from a technical point of view but one that is a racist instrument of repression against the poor. Several former death row prisoners spoke including Shujaa Graham and Juan Roberto Melendez, a Puerto Rican, who was on death row for 17 years and was the 99th person to be exonerated. He stated that, “the judicial system makes so many mistakes that an innocent man can easily get killed.”

Jesse Jackson who had met with Kevin Cooper several time in the last week told the crowd “this is part of a struggle across the nation to remove a system that is flawed.”
Gloria La Riva speaking for the ANSWER Coalition drew a thunderous applause when she said, “It is George Bush that should be sitting on death row for his war crimes in Iraq, Palestine and Afghanistan and for killing over 250 prisoners while the governor of Texas."

Although buoyed by tonight’s victory activists left San Quentin knowing that Kevin Cooper’s reprieve is for at least 40 days before the state can issue another death warrant and during that time the struggle has to not just continue to exist but to grow. 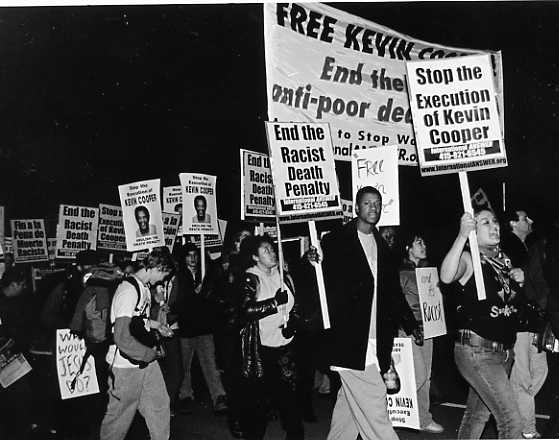