Add an Event
Newswire
Calendar
Features
Home
Donate
From the Open-Publishing Calendar
From the Open-Publishing Newswire
Indybay Feature
Publish to Newswire
Add an Event
Related Categories: Central Valley | Health, Housing & Public Services
Down and Out in Fresno
by Mike Rhodes (MikeRhodes [at] Comcast.net)
Wednesday Feb 4th, 2004 6:04 PM
Report on the attack on the homeless that took place in Fresno. 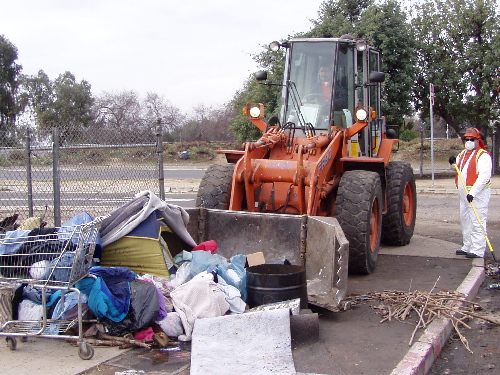 DOWN AND OUT IN FRESNO
By Mike Rhodes
February 4, 2004

The City of Fresno destroyed a community built by poor and homeless people today. In a show of power, a multi agency task force led by the Fresno Police Department (FPD) moved in and ripped apart tents, plastic, and wooden homes in downtown Fresno. The hundreds of displaced homeless people have nowhere to go and the power elite in this community are hoping that this problem will just go away. But how do an estimated 1,500 homeless people “disappear” from existence? Nobody seems to have an answer for that.

Mike Purtell, who works with the Poverello House (a Fresno homeless agency), said that there are about 1,500 homeless people in downtown Fresno but added that “nobody really knows how many homeless there are in Fresno.” A report from 2002 said that there are 19,000 homeless in Fresno and Madera counties, about 16,000 of them in Fresno. The Poverello House has built a new facility in response to the current crisis that can accommodate about 50 people each night, but everyone agrees that is just a drop in the bucket - you do the math. Some of the homeless I talked to today were even more negative about the Poverello’s new facility calling it a “pen” or “concentration camp.” Others suggested that the new sleeping area was nothing more than a dog and pony show for the media.

The FPD’s new policy is to prevent the re-emergence of homeless people’s encampments and force them into facilities like the Poverello House. In that facility which is surrounded by a chain link fence, residents are required to get a photo ID, pass a guard upon entering and leaving, no drugs or alcohol are allowed, they are only allowed to enter after 5 PM and must leave before 8 AM. Dante Johnson, a homeless men who was evicted today from an encampment under a freeway overcrossing, was angry about the displacement and wondered where he would spend the night. Johnson said that their community did not allow drugs or violence and that they kept the area clean. His claims where confirmed in conversations with police and Poverello House staff. So what is really behind this latest attack on the homeless and the criminilization of poverty?

One of the reasons cited by City Officials for clearing out the Santa Clara Street encampment was the presence of criminal activity - drugs, prostitution, and violence. Those accusations are probably true, but the homeless encampment was no more of a magnet for crime than River Park (a major shopping center in North Fresno) where shoplifting and car theft are rampant. Nobody yet, has suggested that River Park be bulldozed to prevent crime. What’s the difference? Some have suggested that it is because the poor and homeless are powerless and are a much easier target than the rich and well to do. But why target the homeless now?

One theory is that Mayor Alan Autry, who is a big proponent of downtown revitalization, wanted the homeless out of the downtown core. Homeless rights activists have heard repeated stories of the poor being harassed if they went North of Ventura Avenue. “They don’t want the homeless near the new baseball stadium or scarring off investors,” said Dallas Blanchard, an activist with Food Not Bombs. The homeless are not harassed as much if they are out of the areas where redevelopment is taking place. When they are visible and get in the way of big real estate deals taking place, they are harassed and displaced. City officials had encouraged a plan that would relocate the Poverello House and Rescue Mission in an industrial area even farther South of downtown.

A couple of months ago the FPD changed their policy and allowed the development of an encampment on Santa Clara Street. This could have been an effort to keep the homeless out of the downtown core and South of Ventura Street. However, something went wrong. When the homeless were allowed to establish a community, it grew and attracted more and more people. The magnitude of the homeless problem in this area became more apparent as the tent city continued to expand. When the homeless community reached a certain level City officials started to question the wisdom of their policy. How big would this community become? 100's of people? 1,000's? If allowed to continue, homelessness in Fresno would become so visible that it would become a political liability for City officials. The solution? Tell the community that crime is rampant and that in order to bring stability back to the area it will be necessary to “clean up” the mess that these homeless people have created.

Some of the homeless asked me why the only solution the City has to this problem is a police action? Dante Johnson would like to know why they don’t open up some of the vacant buildings in the downtown area. As his community was being crushed and stuffed into CalTrans trucks behind me he pointed to vacant buildings all around and asked why those couldn’t be used to house the homeless, provide services, and meet pressing human needs. “It is cold out here, someone is going to die of exposure during the rain and freezing weather,” Johnson added.

The Fresno Bee today said that “the shantytown sprang up last fall when a few people with good intentions donated tents and sleeping bags to Fresno’s homeless.” Jean Chipp, director of the sleeping bag project takes exception with that analysis. She says that “most bags I've given away have been at Roeding Park at the Food Not Bombs meals on Saturdays. As for the ‘people with good intentions’ quote - I don't see it that way. I feel there is room for help at many different levels. For the most part the Sleeping Bag Project is there to help at the lowest of those levels. No matter what, these people are still people, and the weather is still cold and wet and they are outside day and night in that weather... Along with giving bags away we do donate to various social service groups that work with this population so we do work at different levels. I try not to judge these people - it's not my role.”
http://www.fresnoalliance.com/home
§The Police Move In
by Mike Rhodes (MikeRhodes [at] Comcast.net) Wednesday Feb 4th, 2004 6:04 PM 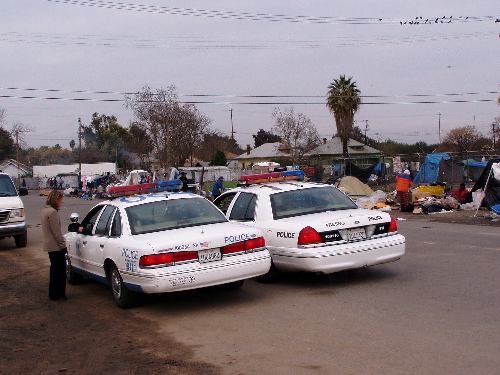 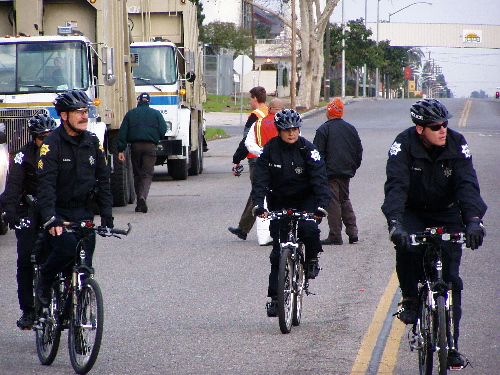 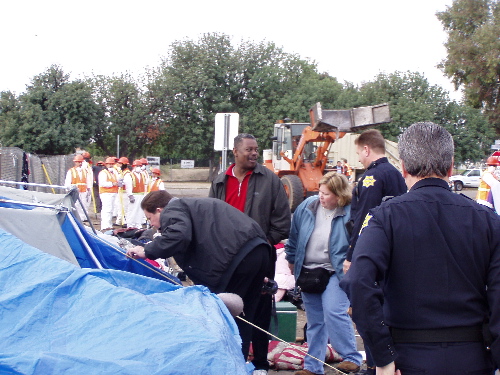 Undercover and uniformed officers negotiate with homeless man who doesn’t want to move. 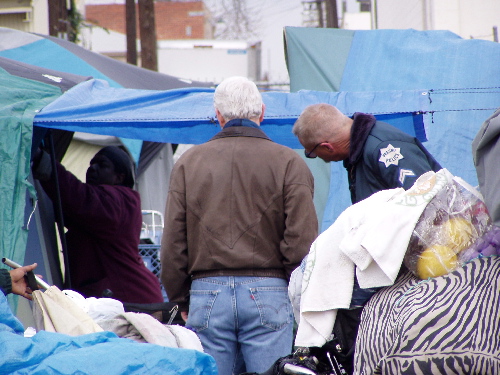 Police and Poverello House staff negotiate with a disabled veteran who wanted to stay in his tent. 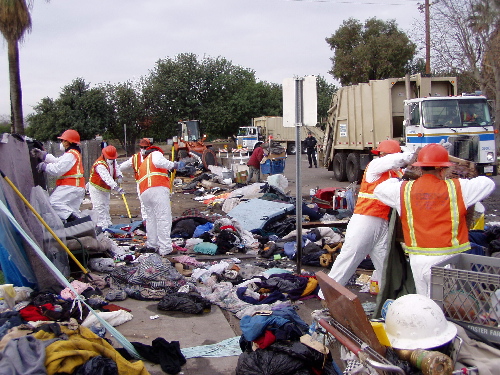 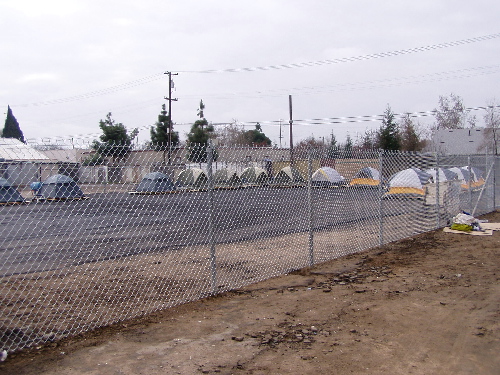 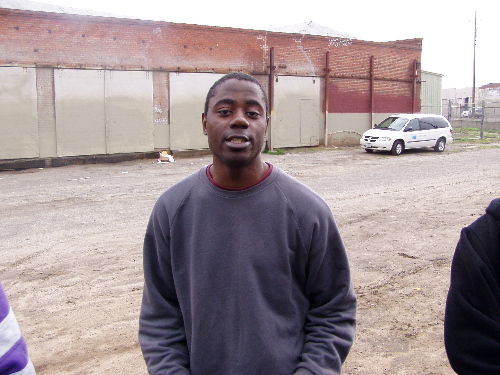 Dante Johnson would like to know why they don’t open up some of the vacant buildings in the downtown area.
http://www.fresnoalliance.com/home
Add Your Comments
LATEST COMMENTS ABOUT THIS ARTICLE
Listed below are the latest comments about this post.
These comments are submitted anonymously by website visitors.