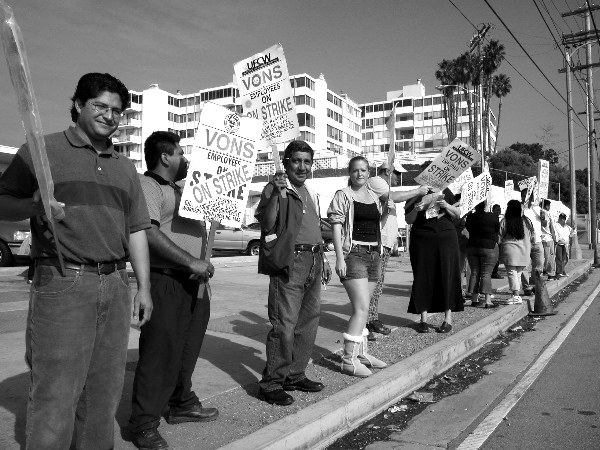 When I first arrived, most of the picketers appeared to be pretty worn out, both mentally and physically. Most of the striking employees have been picketing about 6 hours a day, and their union funds, from which they are collecting money, are running dry. It has been demoralizing to see some of their co-workers cross the line and go back to work, as well as customers crossing the line daily. However, business has been pretty slow at Vons and many people are very supportive of the strike by totally avoiding Vons or conciously spending less money at Vons.

Solidarity came in many forms. And, as the striking employees witnessed the acts of solidarity, the mood of the employees began to transform and they were again bosterious and full of energy.

HOLD THE LINE FOR HEALTHCARE!

Did you know that Vons is owned by Safeway?

As their profits rise, Safeway (Vons), Ralphs and Albertsons are demanding that their hard-working employees pay over $1 billion in healthcare costs and take severe wage cuts.

Currently, over 70,000 members of the UFCW Union who work for “The Big Three” are out on picket lines fighting for their rights for healthcare and living wages. This is at the same times that Vons, Ralphs, and Albertsons’ profits have risen by 32%, 84%, and 123% respectively.

Salaries of the executives who work for these corporations have increased by 260%. On average, CEOs Steve Burd, David Dillon, and Larry Johnston earned $2.6 million in 2003.

Workers in the Los Angeles stores of these three chain grocers are now in their 13 weeks of striking. A labor rally in Beverly Hills in December was recorded as being the largest in history, though, and picket lines are still in effect. In the bay area, signs posted at Safeways (Vons) calmly confirm that the workers here are not on strike. But shopping at these stores still increases store profits and allows the injustices to continue. 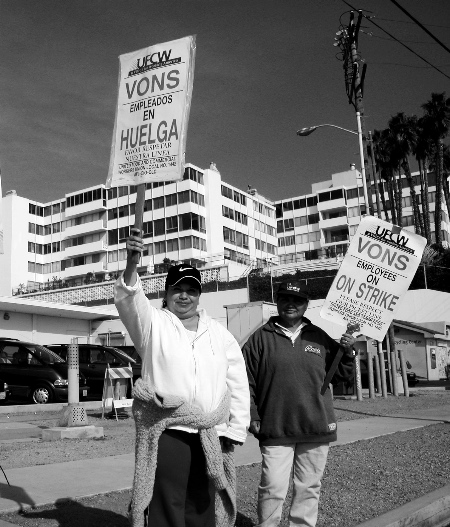 One of the striking employees was kind enough to stand on PCH to ensure that I would not get crushed by a car while taking this photo ;)
§Employees on Strike! Empleados en Huelga!
by ~Bradley (bradley (at) riseup.net) Wednesday Jan 21st, 2004 10:44 PM 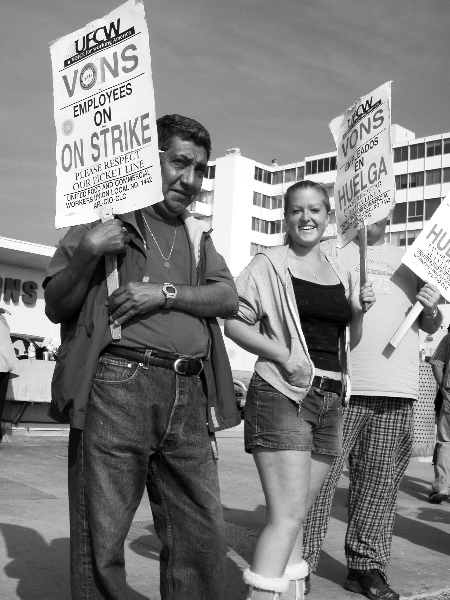 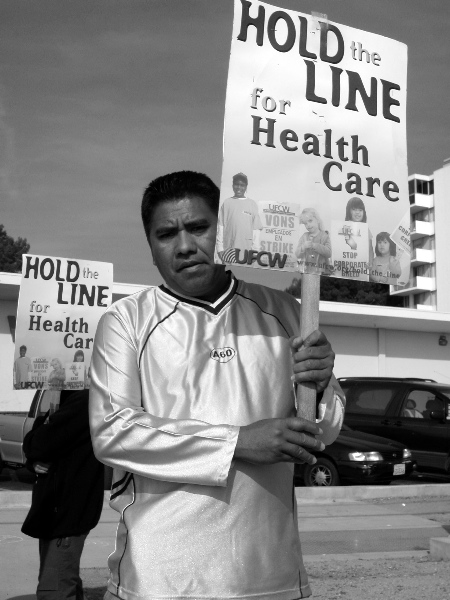 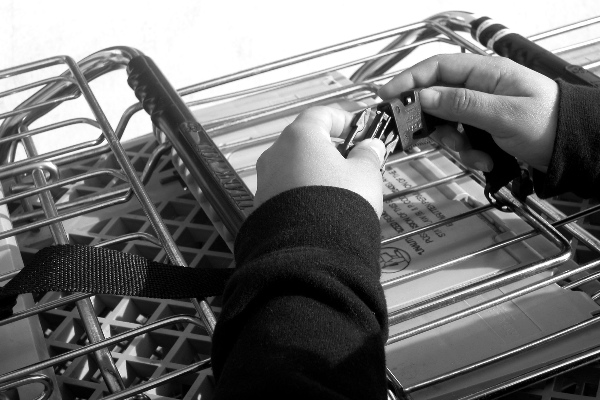 These buckles work well for keeping your little loved one inside the shopping cart, and they can also be used to interlock shopping carts together. Speaking of locking together.... I am very happy to see that Direct Action to Stop War is acting in solidarity with striking grocery workers.
§Resist Corporate Greed
by ~Bradley (bradley (at) riseup.net) Wednesday Jan 21st, 2004 10:44 PM 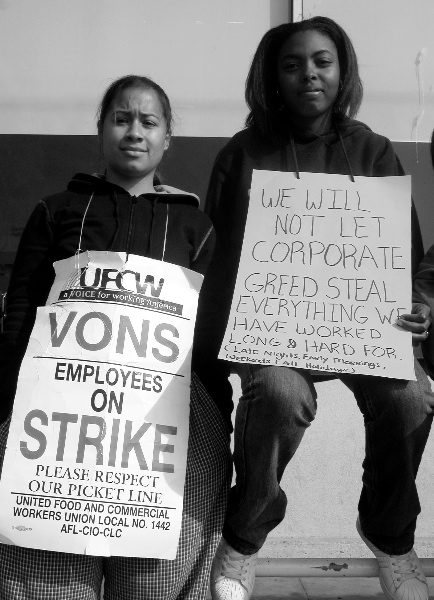 Take action today (or, tonight!). Support all of us by not shopping at Safeway, Vons, Ralphs, Albertsons, or any corporation that exploits its workers while funneling lots of money up the CEOs and other members of the board.
§Vons Employees Thank You For Your Support
by ~Bradley (bradley (at) riseup.net) Wednesday Jan 21st, 2004 10:44 PM 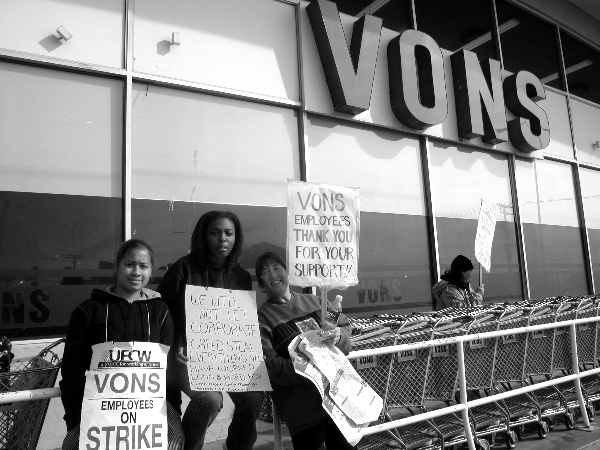 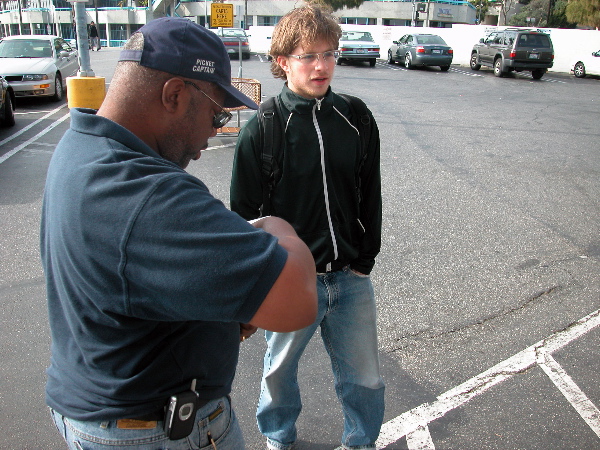 This kind fellow decided not to shop at Vons when he learned about the ongoing labor strike.
§Where is the Heart?
by ~Bradley (bradley (at) riseup.net) Wednesday Jan 21st, 2004 10:44 PM 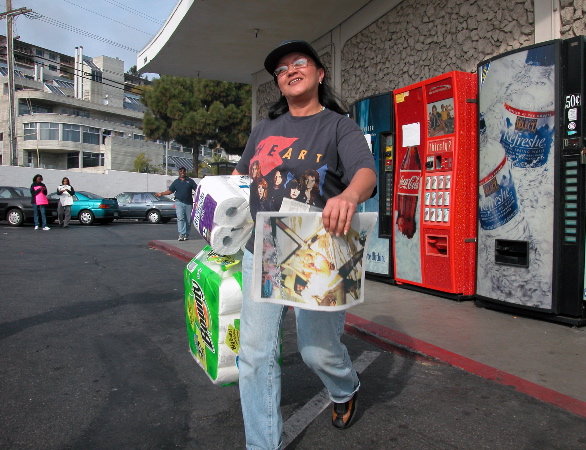 Hum... it says "HEART" on her shirt, yet she crossed the picket line anyway. She and her friend explained that they support they strikers, but they needed to pick up a couple of things.... Next time.... Buy Nothing!
Solidarity = Not Shopping!
§This Guy Thought He Was Smart...
by ~Bradley (bradley (at) riseup.net) Wednesday Jan 21st, 2004 10:44 PM 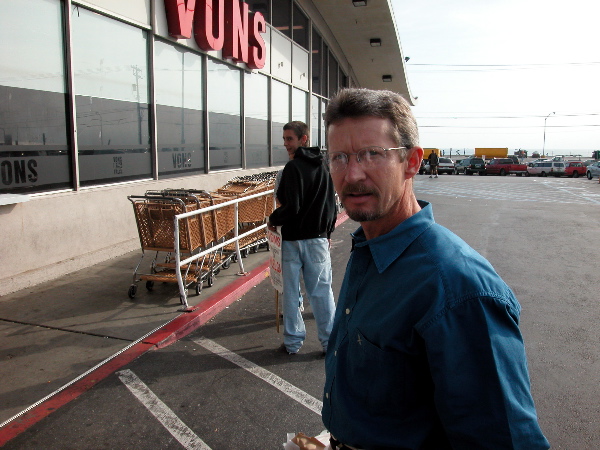 I told him to not shop at Vons and to support healthcare for everyone. He told me to get out of his face and then walked in the store. He came out of Vons with a couple of bags of groceries and people voiced their disapproval. He and I began to argue. He said that he owns a business and pays for his employees's health care. So I said that was great and that he should honor the healthcare needs of all people, not just his employees. He really seemed to become upset at this point... He asked me my first name.... and I gave it to him, then I asked for his first name. He said it was, "Dave" and then he asked me my last name... and I gave it to him and asked him for his last name... Well, he did not give me his last name, rather, he said he was going to call my union and report my behavior. I loudly told him that I do not belong to a union and that I was out here for the children that are too young to stand out here and that I was out here for all the people that were out here for me before I was even born. Dave did not know what to say at this point and he angrily crawled back into $45,000 SUV.
§What Does Dave Really Care About?
by ~Bradley (bradley (at) riseup.net) Wednesday Jan 21st, 2004 10:44 PM 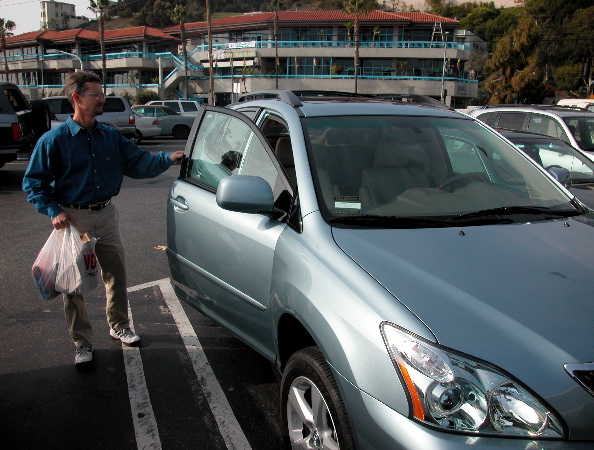 What Does Dave Really Care About?

a) Healthcare and the well-being of people in his community 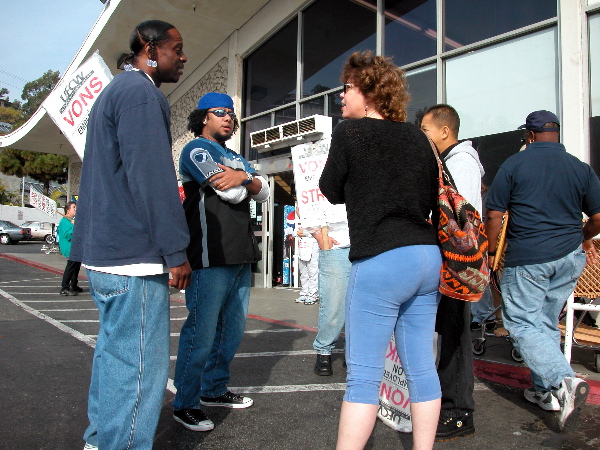 The guy crossing his arms and wearing the blue cap became involved in the picketing after witnessing me "hold my ground well" when debating with Dave about healthcare. The women in the foreground of the photo suggested slogans such as, "Show You Care, Shop Elsewhere!" becuase telling not to shop at Vons was like telling them not to think about a pink elephant...
She was saying that just by saying, "Don't Shop at Vons" it made people hear, "...Shop at Vons." Honestly, I think this lady makes a pretty good point ;)
Add Your Comments
LATEST COMMENTS ABOUT THIS ARTICLE
Listed below are the latest comments about this post.
These comments are submitted anonymously by website visitors.