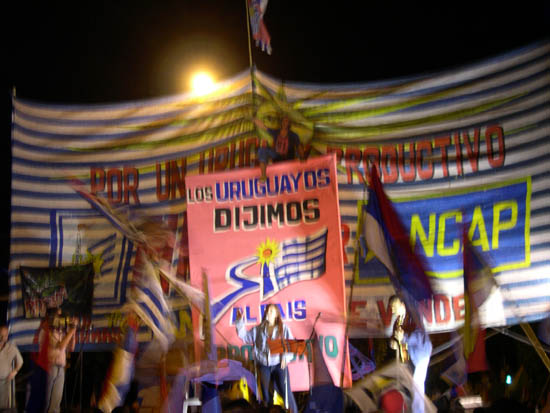 The overwhelming majority of the about 2.5 million voters demanded the abolition of the law 17,448. This law was supposed to terminate the monopoly of the national oil enterprise Ancap on import and export as well as refining of crude oil. At the night of Sunday the 7.12.2003 to Monday, everywhere in the country victory celebrations, held by the opponents of privatisation, took place. The main streets of Montevideo were crowded by cars. Whole families sat in their cars, leaned out of the windows, honked continuously and swivelled flags. Primarily those of the opposition party “Frente Amplio”, but also many flags by trade unions and grassroot activists were to be seen.

During the day of Sunday the popular vote had taken place, which was supposed to decide about the abolition of the privatisation law “Ley de Ancap”. The law was rejected with 62,2 per cent (51% would have been enough) of the votes, the proponents of the privatisation reached 35,4 per cent. In 16 out of 19 provinces of the country the majority voted with “Si” (yes) on pink paper for the refusal of the bill.
The campaign against the law which was initiated by the strong center-left opposition party Frente Amplio (FA) who formed with other activists and trade unions the “Comision de Defensa de Ancap (CDA)” (commission in defense of Ancap), had suceeded.

The vote had the meaning of a decision about the sellout of a further part of the national economy to foreign investors, as well as a votum about the acceptance of the neoliberal economic policy of the conservative government coalition. The election result reflects the generally rejecting attitude of a majority of the population of Uruguay against the economic policy of the ruling parties, the Colorados and the Partido Nacional. The government with president Jorge Battle had submitted the bill. The main argument for the partly privatisation of the enterprise was that this would decrease the prices for gasoline and electricity for the consumers. Furthermore they explained that Ancap, without private participation, would not be able to be competitive, since the refinery wouldn´t work economically enough.

The economic policy of the government is shaped, among other things, by “recommendations” of the International Monetary Fund IMF. In the year 2002 the IMF agreed on a credit of 743 million US dollars, which was attached to the recommendation to give up the national monopoly on fuels. Uruguay has an enormously high budgetary deficit and an indebtedness in billions. These debts result to the majority from the time of the military dictatorship and still have to be settled.

The opponents of the law, united in the “campaign for the defense of Ancap” (CDA), stated in their engaged campaign, that the privatisations of the refineries in the neighboring countries Argentina and Brazil led not at all to a financial relief of the consumers, on the contrary, the prices rose over 100%. Furthermore they pointed out that the national pension scheme and further social expenditures are directly linked with the decision about the sale. The profit of the enterprise finances a majority of the general pensions (Rentas generales), as well as expenditures of the health and education systems. Fears arouse, that the sales could touch the security of the pensions. The private partners would have received the majority in the shareholder meeting as well as the conclusive offices in the executive committee of the enterprise.

The representatives of the government coalition kept pretty silent with comments on the result of the vote. On the press conference, which took place Sunday evening, when the signs of defeat were already visible, former president and Ancap chairmen Jorge Sanguinetti (Colorados) appealed to the opposition to point out concrete suggestions for the future of the enterprise. President José Batlle (Colorados) suggested to keep on working on the law until it receives the satisfaction and agreement of the population.

The are different opinions considering the question whether the victory of the opposition can be rated as an indicator for the presidency elections taking place next year. Representatives of the government deny this. However, analyses of politologists increase which state a clear change in the population and rate the result of the vote as a clear triumph of the Frente Amplio presidency candidate Tabaré Vásquez, who among others led the campaign of the CDA.
http://uruguay.indymedia.org
Add Your Comments
Support Independent Media
We are 100% volunteer and depend on your participation to sustain our efforts!