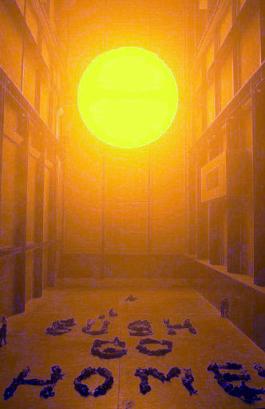 Anti-war protesters literally spelled out their message to the US President tonight – Bush Go Home. The direct statement was made shortly before George Bush and his wife Laura were due to land in Britain for a state visit.

Around 80 people layed down at the Tate Modern in central London form the three words in the Turbine Hall – their message reflected on the mirrored ceiling above. The protesters took advantage of a temporary exhibition, The Weather Project, by artist Olafur Eliasson to voice their anger.

Scores of spectators and participants clapped and cheered as the letters formed into a simple but blunt statement. It did not take long for those round the edge of the demonstration to help form the final word, Now.

One of the organisers, who only wanted to be known as John, said he was really pleased with the way the message had looked. He said: “It worked really well, this was designed to get a message across. I think it is a brilliant use of art for the people.” The 35-year-old artist and multi-media lecturer from Clapham, south London, said the message was clear to President Bush.

“Stop what you are doing, think,” he said. “He is lying to us. He is lying basically about everything that the war has been based on and now I think we know his motives.”

The group of friends who met for today’s symbolic protest are all involved in the art world and were gathered to take action in just three days. The idea was only hatched on Saturday, one protester said.

A spokesman for the Tate said the gallery was not aware of the protest in advance. But he said: “People have been expressing themselves in this space and reacting to the work since it opened in October. “We hadn’t expected people to lie on the floor – it is very interesting to see all the different reactions to the work.”

It is understood that the half Danish, half Icelandic artist Eliasson was among the spectators at the protest.
http://www.art-for-a-change.com
Add Your Comments

LONDON: More than 100,000 anti-war demonstrators plan to cap their protest by toppling a giant statue of US President George W Bush in central London's Trafalgar Square - an echo of the toppling of a statue of Iraqi leader Saddam Hussein in April.

"The idea is to highlight how fake the toppling of the Saddam statue in Baghdad was," Liz Hutchins, spokeswoman for the Campaign for Nuclear Disarmament, said.

As police geared up for a huge security operation, Bush flew in to London last night to mount a defiant show of solidarity with British Prime Minister Tony Blair over the war in Iraq that has polarised the world.

Protesters opposed to the war in Iraq prepared for demonstrations they hope will overshadow the pomp and ceremony of the state visit.

Among those applauding the protest was maverick London Mayor Ken Livingstone who called Bush "the most dangerous man on the planet" and said that, even if asked, he would refuse to shake hands with the American leader.