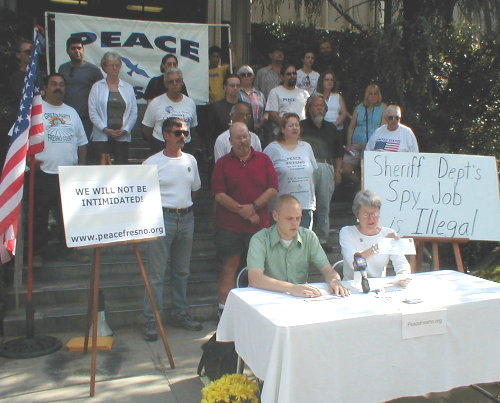 Peace Fresno is an activist organization dedicated to peace, social justice, and alternatives to war.

A Fresno. County deputy sheriff infiltrated Peace Fresno. For 6 months he participated in our meetings and events. He used a false name, lied about his occupation, and pretended to be sympathetic to our views. We gave him our trust.

Attorney General Bill Lockyer has recently stated that this kind of surveillance is illegal under the California Constitution. It is, however, permitted under the Patriot Act, and now we know why the Patriot Act is so dangerous. Peace Fresno has actively opposed the Patriot Act since September 11, 2001.

After we discovered this deception, attorney Catherine Campbell wrote a letter to Sheriff Richard Pierce on our behalf. We asked: Was Aaron Kilner part of an undercover investigation conducted by the Fresno County Sheriff’s Department or any other law enforcement agency?

We know a deputy sheriff was undercover at our meetings. We want to know why Peace Fresno was targeted.

Someone assigned the deputy sheriff to Peace Fresno. We want to know who made this assignment.

Most important, we want to know what other community organizations, religious groups and political groups are under surveillance by law enforcement in Fresno.

Peace Fresno will not be intimidated. We will continue to work for nonviolent solutions to terrorism and militarism. We'll continue our dedication to social justice. And, we'll continue to champion civil rights and civil liberties.

We'll exercise our duties as citizens on October 15 when George Bush comes to Fresno.

We at Peace Fresno believe that spending money on surveillance of peace groups is a gross misuse of taxpayer dollars. The board of Peace Fresno has decided to return Deputy Kilner's $12 membership fee to the Sheriff's Department so it can be used for the genuine protection of the people of Fresno.

Presented at Conference by: Camille Russell and Nicholas DeGraff

END_OF_DOCUMENT_TOKEN_TO_BE_REPLACED
Related Categories: Central Valley
Add Your Comments
Latest Comments
Listed below are the latest comments about this post.
These comments are submitted anonymously by website visitors.
TITLE
AUTHOR
DATE
"dont call the PD"
been there, done that
J Belongs in Jail
Progressive
Facist Nonsense
Progressive
how about this Tuesday?
J
Law Enforcement Demands Respect?!
Dan
Editorial
The Fresno Bee
Surveillance of socialist Subversives
Surveillance of socialist Subversives
Haha that's cute
realAmerican
motorcycle
die
Hi
Howdy
Support Independent Media
We are 100% volunteer and depend on your participation to sustain our efforts!