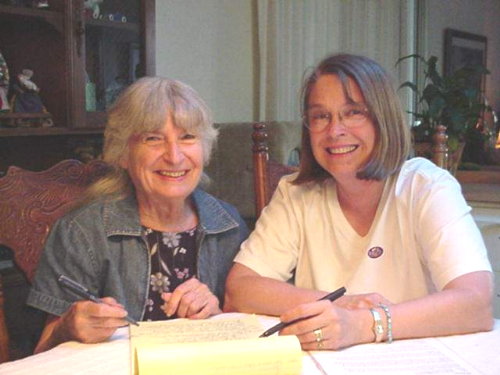 On September 2, 2003, the Porterville City Council unanimously passed a resolution reaffirming Porterville's commitment to the Constitution and to our fundamental rights. It is basically the same as the original resolution ( attached) but was amended by one of the Council Members who had some objection to including "illegal aliens" among those protected . I have not been able to get a copy of the amended resolution as yet ( 9-12-03)

Merrily Davies and Carolyn Waller got together the resolution and got it on the Council agenda. There were some audience comments and pleas for passage at the meeting prior to September 2, but one council member was absent, and at the request of the lone dissenter of the four present , the Council agreed to put it off a week until the missing member could be in attendance. In the meantime, we put out a request for concerned citizens in the area to contact the council members individually by letter, e mail, telephone, or personal contact. According to the mayor pro-tem, who called me about a couple of points before the meeting ( I had written each of them a letter with reasons why we needed to pass it) he received many e-mails and phone calls on the resolution. I had about a half-hour talk with the member who had missed the previous meeting, and found him in the process of weighing the pros and cons. He later proposed a couple of changes in the resolution, such as having the entire Council sign it, and inserting language concerning not extending rights to "illegal aliens."

We made a number of presentations to the Council at the Sept. 2 meeting during oral presentations, starting with Merrily's quote from the Executive Vice President of the National Rifle Assn. which supported resistance to the Patriot Act. She stressed that it was a non-partisan issue. A number of passionate and well-reasoned arguments including personal experiences as well as legal clarification ( a lawyer in the audience pointed out that citizens of other countries here already had a number of rights, and that it was inappropriate to include wording to make the resolution just apply to "legal" residents. The Council agreed affirmed human rights without singling out "illegal aliens." The resolution was made deliberately vague which could allow all of the councilmen to support it. Porterville is not known for its liberal politics. An ex-mayor of Porterville spoke against the weak resolution, calling it an "ultra-liberal" measure. This was particularly humorous, coming after Merrily's presentation with quotes from the NRA and the American Conservative Union!

The resolution did not include specific requests to city employees such as the police chief to refuse to cooperate with the FBI in turning over immigrants, etc. This type of language in the original Visalia resolution was one of the reasons they could not get theirs passed, I think. At the Council meeting in Visalia the same night, they drew a 2-2 stalemate on a watered-down version, the deciding vote, reportedly pro-resolution , did not materialize as this member was absent. One of the anti-resolution members said that it was now a "dead issue." Daniel Lee and the Visalia contingent intend to keep the issue alive.

Maybe the message in all this is

1) keep the proposed resolutions positive, affirming the rights that are under attack
2)lobby the Council members as much as you can, keeping the tone of the argument persuasive and not negative
3) keep the notion that this is not a partisan issue, The idea is to present it positively, with the result that voting it down would almost seem un-American!

Heartiest congratulations to out courageous and indefatigable ladies, Merrily and Carolyn and all of those who lobbied and addressed the Council. Also big vote of thanks to Daniel Lee who has been working so hard with the Visalia project. Maybe with the Porterville resolution passed, it will be easier for others in the Valley.

WHEREAS, the City of Porterville fully supports the Constitution of
the United States and its amendments, particularly the Bill of Rights and
the Fourteenth Amendment, and;

WHEREAS, the fundamental human rights and civil liberties
guaranteed in the Constitution of the United States and the Constitution of
the State of California are essential to the well-being of the citizens and
community of Porterville, and;

WHEREAS, several laws and orders enacted at the state and Federal
level, including several provisions of the USA PATRIOT ACT, threaten these
fundamental rights and liberties.

Section 1. The City of Porterville is committed to upholding the
human rights of all persons in Porterville, including United States citizens
and citizens of other nations, and the free exercise and enjoyment of any
and all rights and privileges secured by the constitutions of the United
States of America and the State of California.

Section 2. The City Council of the City of Porterville calls upon
all City officials and employees to respect the human rights and civil
liberties of all members of this community, including those who are citizens
of other nations.

Section 3. The City Council of the City of Porterville calls upon
all private citizens, including residents, employers, educators and business
owners, to demonstrate similar respect for human rights and civil liberties.

Section 4. The City Council of the City of Porterville urges the
State Legislature, the Governor of the State of California, and the United
States Congress, particularly the delegation representing Porterville, to
actively work for the revocation of any law or executive order that limits
or violates fundamental rights and liberties embodied in the constitutions
of the United States of America and the State of California.

Section 5. The Mayor shall sign this Resolution and the City
Clerk shall attest and certify to the passage and adoption thereof.
http://www.southvalleypeacecenter.org/
Add Your Comments
LATEST COMMENTS ABOUT THIS ARTICLE
Listed below are the latest comments about this post.
These comments are submitted anonymously by website visitors.