by Borzou Daragahi
Our man reaches the end of his rope. Probably the most honest thing you'll read by a reporter in Iraq. 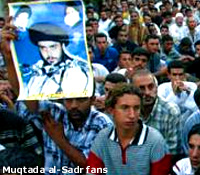 August 27, 2003
The intense heat has turned my black jeans white with the salt of my sweat. The crowds surge and push and crush me as I wind my way through. The violent sun beats my head, dizzying me. I try to steady myself. I take a deep breath but smell nothing but dirty socks and sweat. The heat seems to radiate from the ground up as well as from the sky down. I am soaked with perspiration. My eyes are blurred, my vision is skewed. I have the distinct sense of being at one of the huge outdoor rock concerts I used to frequent a decade ago, the rowdy summertime punk extravaganzas. I sense the same razor-sharp twitchiness of young sexually frustrated men. There is the same excitement as the angry, young headline act comes up to perform. There is the same lousy public address system and sea of blankets spread out. I even start thinking that I'm getting too old for this shit. But this is about as far from a rock concert as you can get. This is a Friday prayer sermon in the city of Kufa by a young Islamic fundamentalist cleric named Muqtada al-Sadr.

I've been spending a lot of time speaking with Shiite clerics in the new Iraq. I tell you, you can't avoid it. With Saddam Hussein gone, their stock has really risen. Sixty percent of Iraq's population are Shiites. Under Saddam Hussein they were oppressed, marginalized and brutalized. He came down particularly hard on Shiites in the south, who rose up against them following the 1991 Gulf War. Many clerics led that revolt, and like pop stars in the U.S., Shiite clerics' likenesses are wheatpasted onto walls around all sections of Baghdad. There are Shiite clerics who run newspapers. Clerics who run charities. Clerics who run mosques, clinics and schools. There are very devout clerics who are nevertheless tolerant. There are very cynical clerics who who feign devotion to gain power. There are even radical reformist clerics who oppose Islamic traditions and argue for a strict separation of mosque and state.

Muqtada al-Sadr is definitely not one of them.
During that speech in Kufa, he said a lot of angry things against the American occupation. He vowed to create his own army, naming it after the Imam Mahdi, the 9th century Shiite saint who disappeared from the Earth and whose return will herald a new age.

Later, we land an interview with the intense, brooding young Mullah. He turns his eyes away from women and never smiles. He's deadly serious and a little frightening. He wears the black turban of the "seyed," or the descendant of the prophet. In his dinghy office in a narrow alleyway in Najaf, he speaks out against America, the west and the U.S.-installed governing council. He says the governing council has no legitimacy, that the Iraqi people gave no input whatsoever to its creation. I start nodding in agreement. It's strange, even though I disagree with his very existence, even though he scares the hell out of me, even though he would probably have me murdered or deported if he ever took control of Iraq, I think he's got a point. The Iraqi governing council has no legitimacy, international or domestically. It is a complete and utter puppet of America, with no power whatsoever except, quite pathetically, to make or unmake holidays.

On the other hand, I've met many of the Governing Council members. They're decent people, smart people, motivated and committed to their country. Many - like Muwafak al-Rubayee or Abdel-Aziz Hakim - aren't even pro-American, or weren't until they got picked to be on the council. How can I agree with Sadr and agree with them at the same time? I feel like my mind is twisting and turning, and I have no idea what to make of Iraq any more. The longer I'm here it seems the more convuluted my judgment becomes, the more complicated the prisms through which I view Iraq and the Middle East.

All of a sudden I see Rym Brahimi, of CNN. She walks into Sadr's office with her team. She laughs when she sees me, but quickly hushes herself. I had just spoken to her a few evenings ago by the swimming pool at al Hamra. Moqtada seems not at all amused. But I'm suddenly more interested in chatting with my old graduate school classmate Rym than finishing my interview with this creepy guy. I start thinking of Manhattan and 24-hour Korean delis and the good life, how I miss my friends, how I miss my folks, how through the haze of heat and diesel exhaust and the roar of tanks, nothing here makes any sense to me any more.

What's so interesting about Iraq is the enormous complexity of what has happened here, what the U.S. invasion meant. I think we're all grappling to find a vocabulary to describe it. Critics of U.S. foreign policy argue that it was a belligerent, bullying act by a chauvinistic superpower based on lies. I think they're absolutely right. Advocates of U.S. foreign policy argue that it was an act of liberation, freeing an ossified totalitarian society. I think they're absolutely right, too. I think the problem is that we're struggling to describe the consequences of a hitherto unknown phenomenon, not nearly as unjustified as the the U.S. invasion of Southeast Asia, not nearly as justified as the U.S. invasion of Europe. Maybe we should call it the "occuberation" of Iraq.

What is happening here right now - the incompetence of the U.S. occupying force - is almost a separate story. A much easier story. Make no mistake, the United States is currently bumbling, turning the Iraqi people against it with its bullheaded moves. Yes, the Americans may be handing out soccer balls to Eye-raqi children and building water treatment plants. No, they're not getting haircuts at Iraqi barbershops or interacting with Iraqis in any meaningful way. The American soldiers hide behind their barbed wire and concrete barriers and seethe at the Iraqis as they munch on their MREs and dream of home. None of the non-coms wants to be here, even though the commissioned officers see it as a great career boosters. The average soldier has grown increasingly rude and hostile toward the locals. For example, every Iraqi kid knows how to say "Get the fuck away!" in perfect English. That's just wrong.

Meanwhile I'm getting burned out, too, and I'm sure its affecting my ability to cover Iraq. I've now been in Iraq for over three stressful months. In that time I've been embedded with the Army's 4th Infantry Division in an experience I'll covet for my whole life. I've quit my job with a news agency to freelance again because I wanted to cover the story and not claw my way up some lame ladder. I've been on the scene of two terrorist bombings and numerous shootouts and attacks. I've been mortared. I've been frisked so many times I feel like a sexual abuse victim.

In addition, I've now not been out of the region for almost a year. I've spent more time in Iraq over the last year than outside of it. I've started to become cynical and in need of a change of scenery. I go to press conferences and look around and think what strange animals we are, sitting around in this room watching as the foolish man speaks his foolish words. I see the folks from the wires who refuse to speak to each other. I see the folks from the first-tier papers who keep their distance from the folks from the second-tier-paper colleagues. Over there's the French television journalists who always ask stupid questions in bad English. There's the Japanese journalist who asks the same stupid question at every presser. Some might appreciate the Zen of such rituals. I don't. I think what would someone landing from Mars think of this? I feel like I'm far away. It's all become a little absurd to me. I see the little stories we spin out, I notice the little distortions and exaggerations we sneak in. A good friend once said to me, "All public communication is terrorism," and each day I begin to see his point more.

GNN's man in Iraq, Borzou Daragahi is a reporter who has written for U.S. News & World Report, MSNBC.com, South China Morning Post, and the Christian Science Monitor, among many others. His writing and photos can be viewed his personal web site: http://www.borzou.com. To discuss this Article and other issues please visit the Guerrilla News Forum.
END_OF_DOCUMENT_TOKEN_TO_BE_REPLACED
Add Your Comments
Support Independent Media
We are 100% volunteer and depend on your participation to sustain our efforts!