Add an Event
Newswire
Calendar
Features
Home
Donate
From the Open-Publishing Calendar
From the Open-Publishing Newswire
Indybay Feature
Publish to Newswire
Add an Event
Related Categories: Anti-War
Karl Rove Wants Dean Against Bush for 2004
by Juliet Eilperin
Saturday Jul 5th, 2003 5:15 AM
Rove told a companion, " 'Heh, heh, heh. Yeah, that's the one we want,' " according to Daniel J. Weiss, an environmental consultant, who was standing nearby. " 'How come no one is cheering for Dean?' " Then, Weiss said, Rove exhorted the marchers and the parade audience: " 'Come on, everybody! Go, Howard Dean!' " 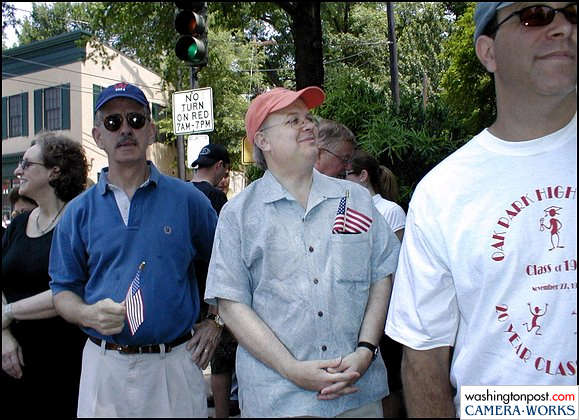 Talk about lining up the competition. President Bush's chief political adviser has seen the possible presidential candidates among the Democrats and has found one he apparently thinks his man can beat: former Vermont governor Howard Dean.

Karl Rove tried to stir up enthusiasm for Dean marchers yesterday at the 37th annual Palisades Citizens' Association Fourth of July parade along the District's MacArthur Boulevard, which always attracts plenty of politicians.

As a dozen people marched toward Dana Place wearing Dean for President T-shirts and carrying Dean for America signs, Rove told a companion, " 'Heh, heh, heh. Yeah, that's the one we want,' " according to Daniel J. Weiss, an environmental consultant, who was standing nearby. " 'How come no one is cheering for Dean?' "

Then, Weiss said, Rove exhorted the marchers and the parade audience: " 'Come on, everybody! Go, Howard Dean!' "

"I am endorsing Dennis Kucinich for president, because he stands up for heartland Americans who are too often overlooked and unheard," Nelson said. "A Kucinich administration will put the interests of America's family farmers, consumers and environment above the greed of industrial agribusiness."

Kucinich was thrilled. "It's an honor to earn the support of a man who has come to symbolize the best values of America," he said.

Calif. Recall Gains Favor
A majority of those polled by the Los Angeles Times believe California Gov. Gray Davis (D) should be recalled in a special election. The newspaper polled 1,412 adults, 1,127 of them registered voters; 51 percent favored a recall, 42 percent were opposed and the rest were undecided.

Recall support had grown since March, when 39 percent of those polled by the Times said it was the way to go. The good news for Davis in the latest poll, conducted from June 28 to July 2 with a margin of error of plus or minus 3 percentage points, is that many who thought ousting him was a good idea balked when they learned a special election to do just that would cost $25 million or more, the Times said.

© 2003 The Washington Post Company.
http://www.washingtonpost.com/wp-dyn/artic...
Add Your Comments
§if we're going to stoop and support a Democrat, it's Kucinich
by Fuck Dean
Sunday Jul 6th, 2003 2:24 AM
Kucinich has more fire and guts that Dean, despite what Dean people like to parrot

Being in favor of a Democrat is disgusting enough, but if we are to do it, particularly before a final candidate is chosen to represent the Democratic party, it's logical to support Kucinich.

Kucinich or Dean can beat Bush -- and Kucinich would easily beat him. That's right. Easily. The mainstream media wouldn't be able to totally ignore Kucinich if he was nominated, and Kucinich's words speak to Americans. Dean is a faker....... he's canned. some of what he stands for is progressive, but most of Dean's history isn't. He's a fake.

The Democratic party stinks to high heaven, but Kucinich is one of the few in the far left of the Party that is mostly honest and mostly progressive.
Add a Comment
§WWW.KUCINICH.COM
by CLEVELAND
Sunday Jul 27th, 2003 11:17 AM
http://WWW.KUCINICH.COM
Add a Comment
Support Independent Media
We are 100% volunteer and depend on your participation to sustain our efforts!