Add an Event
Newswire
Calendar
Features
Home
Donate
From the Open-Publishing Calendar
From the Open-Publishing Newswire
Indybay Feature
Publish to Newswire
Add an Event
Related Categories: Iraq | Anti-War
Pictures From Bechtel Protest In SF
by Z
Thursday Jun 5th, 2003 11:01 AM
Around 7 AM on June 5th 2003, several hundred activists gathered at Bechtel headquarters to protest Bechtel's profiting off of the suffering of the Iraqi people. Over a dozen people locked arms and were arrested. Protests are continuing all day. 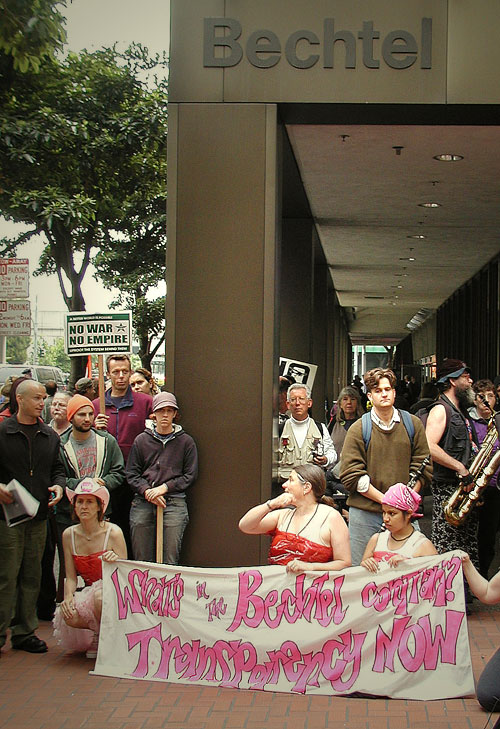 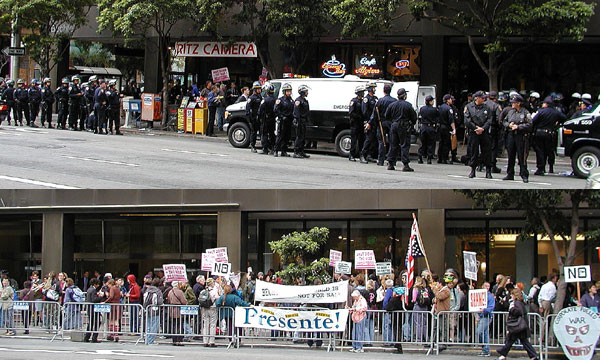 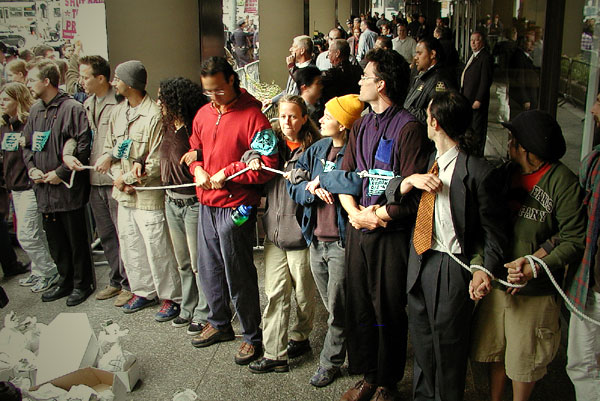 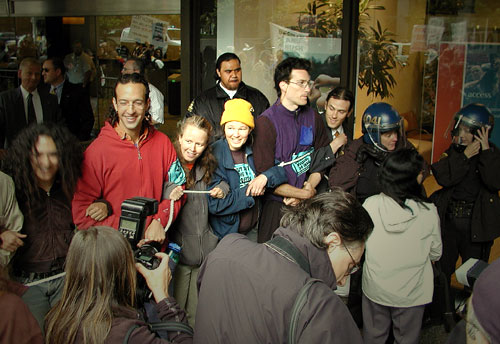 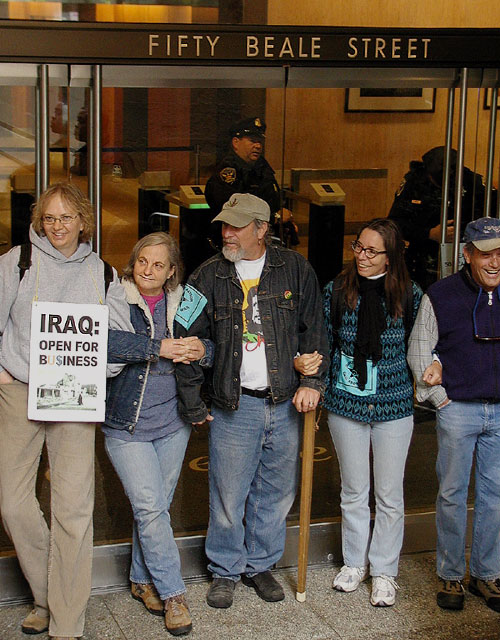 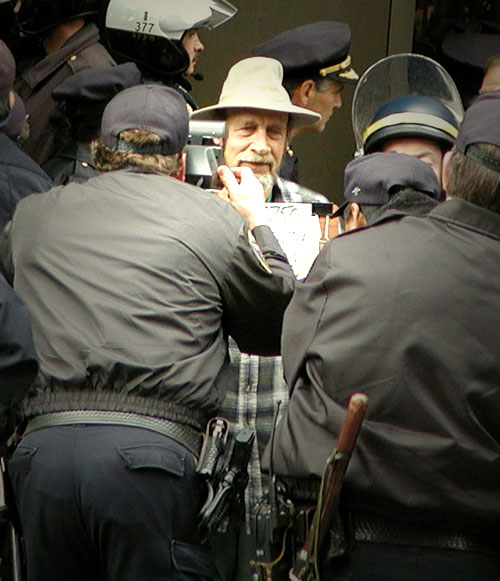 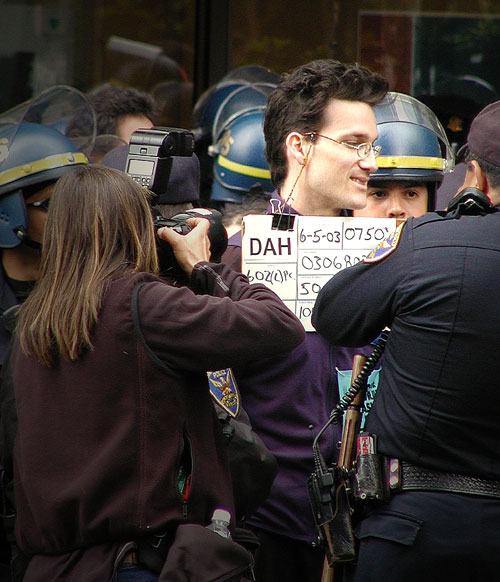 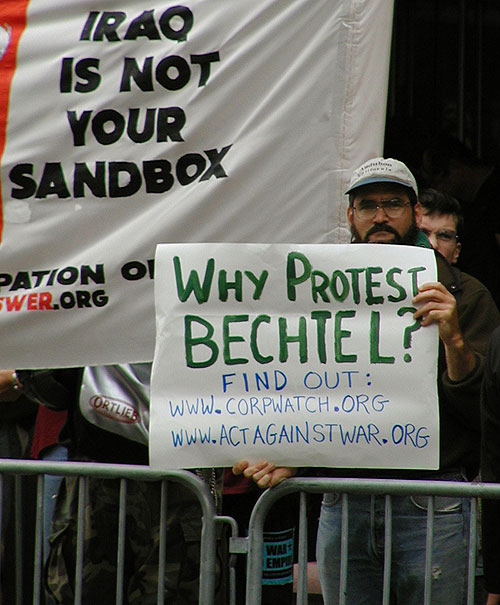 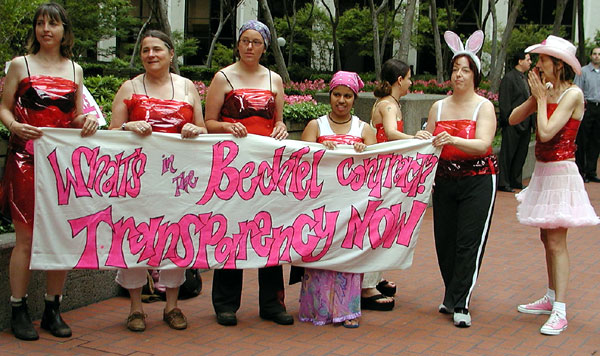 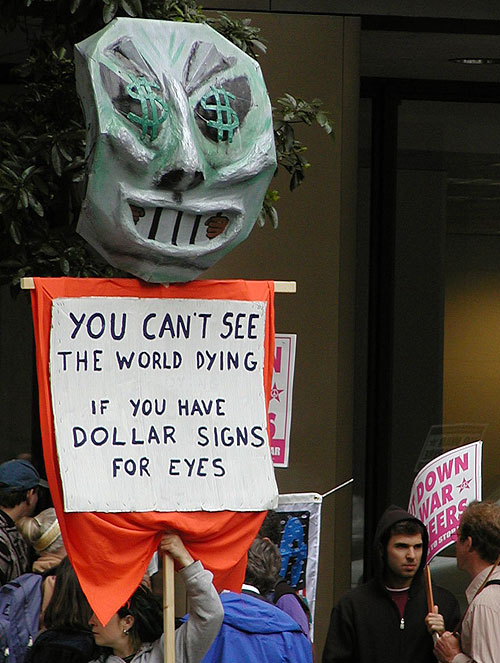 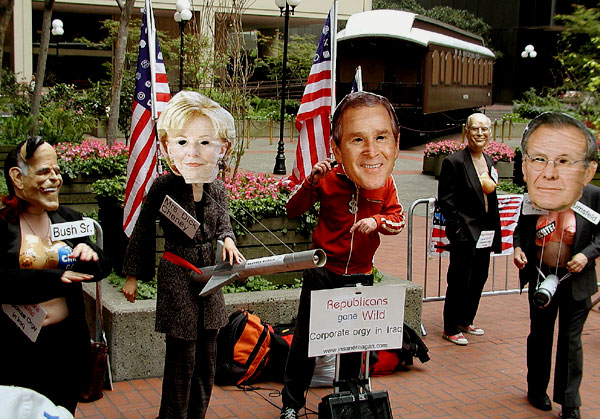 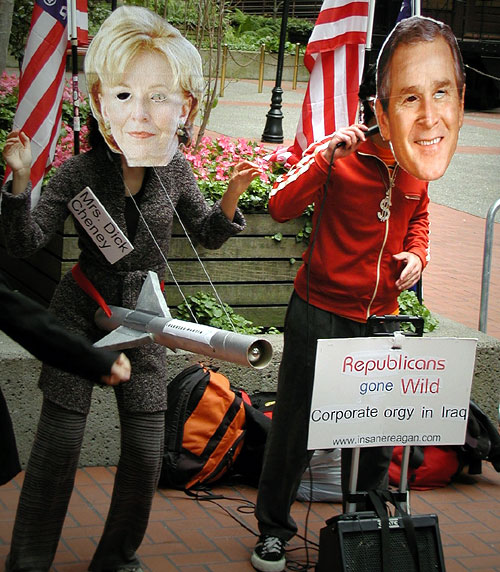 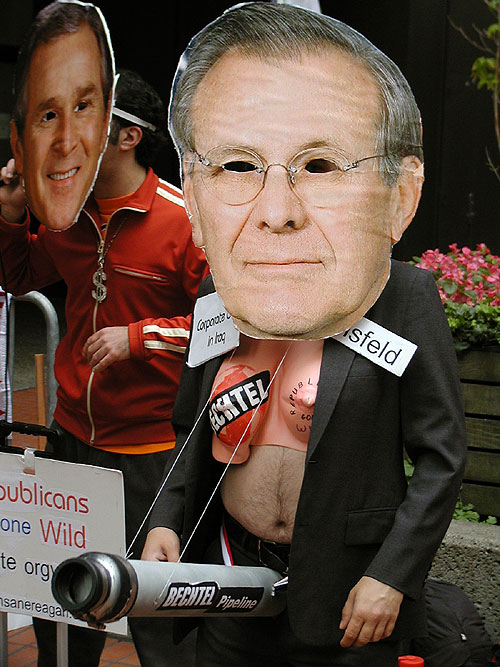 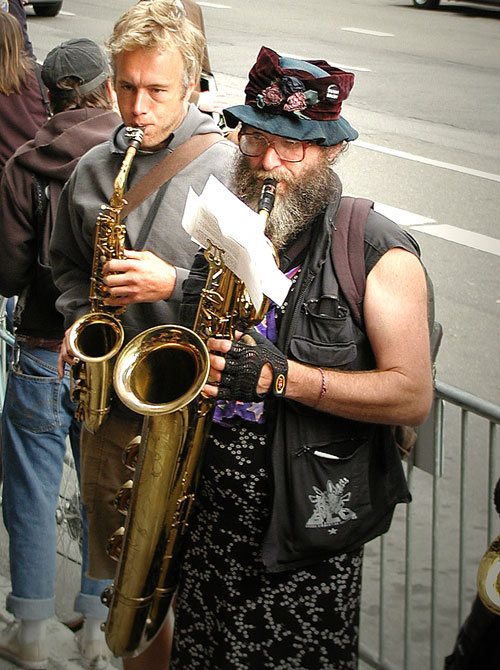 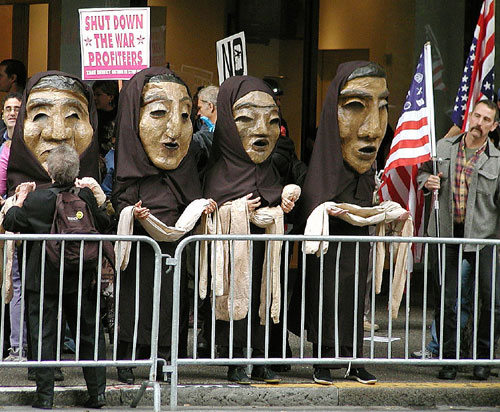 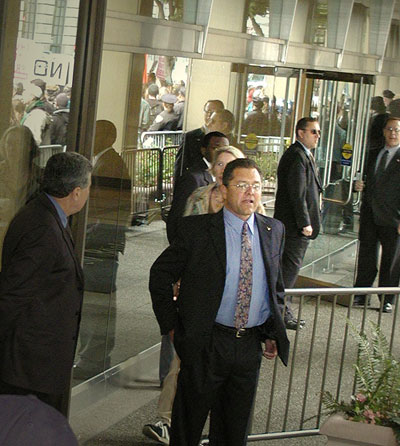 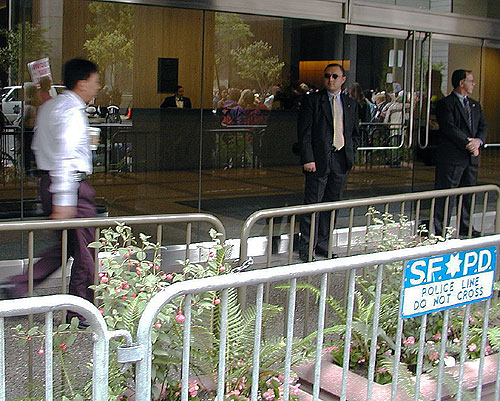 §...
by .....
Thursday Jun 5th, 2003 3:43 PM
I think we should not let Bechtel fix up Iraq......after all, after we freed the Iraqis, they should just build up their country by themselves.....
Add a Comment
§leftist activisim is futile it so seems.
by give it a rest!
Thursday Jun 5th, 2003 5:14 PM
you do relize that your little displays of disobedience don't change a thing eventually

what you are doing is no different than walking up-hill on a tread mill and without moving one inch only working up a sweat.

The reason is HItler had the street masses convinced that it was Jewish corporations driving the country to war. And they started by protesting just like you do now. Then they moved on to bar stools.

Add a Comment
§&quot;HItler had the street masses convinced&quot;
by history buff
Friday Jun 6th, 2003 10:16 AM
That was later. When Hitler joind the Party, there were six other guys. They met in a bar and kept their dues in a cigar box. At that point, they could have been nipped in he bud with great ease.
Add a Comment
§The left was the first to fight fascism
by Michael Fury
Friday Jun 6th, 2003 10:31 PM
The american left wanted to "nip Hitler and fascism in the bud," but the american right protested. "no we can't support the fight against Franco, we can't get involved in Europe, besides the Nazi's are going to attack the U.S.S.R." So by the time the American Right wing got off thier bunds and realized WWII had started, two years earlier, the only option to stop Hitler was war. So remember it was those "premature anti-fascists" who led the fight against Herr schickelgruber, and not the Republican Party.
Add a Comment
§fighting hitler
by king rockefeller
Sunday Jun 8th, 2003 1:11 PM
if it wasn't for president dubyas grandfather prescott and his fascist friends there would have been no nazi party. do a google search for "prescott bush nazi" and see what comes up. check out the involvement he had in running nazi banking fronts in the US. prescott was charged for trading with the enemy (the nazis) for f*@k sakes! the rockefellers had a hand in controlling running auschwitz. you can write this off as conspiracy theory but its not. and what happened after ww2? the nazis were brought to work for the cia via operation paperclip.

god bless amerika
Add a Comment
§rockefellers control the &quot;free world'
by zbygniu
Sunday Jun 8th, 2003 2:49 PM
kissinger is a rockefeller goon. their exxon-mobil-chase manhatten empire controls many big corporations,banks and a good chunk of the economy. they sold oil to the nazis in ww2, and owned alot of stock in the company that built auschwitz. but they have never been in much trouble for their treason and genocidal crimes.their front company kissinger associates had its employee paul bremer installed as todays' ruler of Iraq. guess who gets the oil?
Add a Comment
§It is possible to stop facism
by David
Sunday Jun 8th, 2003 5:14 PM
I just wanted to say that facism can be stopped by an organized effort of labor as well as religious groups.
Remember when Hitler came to power some of the money which he used to help rebuild his military and manufacturing base came from American investors looking for profitable opportunities--the same had happened in Italy. These investors loved the facist anti-union stance of Facism. Still do.

Also the Pope in his concordot with Hitler silenced one of the most powerful opposition groups in Germany.
which was the Catholic Church.

WIth labor groups as well as Socialists and Communists and Catholics effectively silenced, Hitler and his German corporate backers who now had the financial backing they needed came to power.

A concerted effort of Catholic opposition, labor strikes, and non-cooperation by the Zionists, along with the principled stance of not investing in such extremists by American rich investors might have prevented Hitler and Facism in Europe and World War II. And all of it could have been done peaceably.

Add a Comment
§Labor's too money hungry
by any definition.
Monday Jun 9th, 2003 7:41 AM
The unions will go where the money is, ethics be damned. Faci$m? No problem. Capitali$m? No problem. Communi$m? Look at how the Unions acted there - because Communism wouldn't let them keep the money!
Add a Comment
§typical
by nando
Monday Jun 9th, 2003 10:47 AM
i just can't believe what a MASSIVE STACK of riot cops that are used to unchain a few activists!!! Here in belgium a forest that was occupied by dozens of lock-ons was attacked by ten times less cops.

these images are so typical for the american interpretation of 'freedom of speech', protesters have their names written in some kind of fbi list, and all that sh$t.

Add a Comment
§Brute Force = Change
by Christopher Lamb
(BlacKHeliKopter [at] hotmail.com) Tuesday Jun 10th, 2003 1:39 AM
I do not consider myself to be a violent person, and I am all about finding a peaceful way out of any situation. What I am saying is the only real way to stop the right from doing what they are doing, monopolizing the media, taking away our civil rights (USA PAtriot Act to name just one) , and many other things, is, well, more or less, to use the only thing that they seem to understand, brute force. We can preach all the Democracy we want, but they could care less. Whoever has control of the government will be the one who will call all the shots, and thats what they are doing. They will find ways to get at us, to stop us from having an equal voice, they will do what it takes to make sure we keep quiet, or at least, so no one hears about our dissent (through media manipulation). They are taking the power from the common person and telling them that it is for the best, for their protection from the terrorists, when it isn't actually about that at all, it's about controlling the masses and doing what they please. America was found on the basis that all people are created equal (except not really, because slavery had existed their for years, and the black man wasn't considered a real person by the rich white persons standards), and the right government I live in is doing everything they can to take that away from me. But the most astonishing part of this all isn't what the government is doing, it's that the American people don't care. I am the only one of all my friends who has a leftest way of thinking, and I am only one of two of all of my friends that even cares about issues relating to anything other than drinking or girls (the other being a conservative republican), which sickens me. I believe the majority of America just isn't educated on the grand scheme of things (and I'm not suggesting I am all knowing or anything, I just feel that since I actually care about the world and what happens to America that I sort of have a head start on it). We have to educate the world and show them both sides of every subject. I hope I don't sound like a ranting lunatic, I just don't have anyone to share my ideas and thoughts with.

And as for Hitler, Someone should have shot him in the back of the head well before the first World War (though there were so many others who could have easily rised to the occasion to take Hitler's place, providing that they were at least as charasmatic as Adolf). Fuck Nazis.
Add a Comment
§It's also too bad ...
by enough mistakes to go around
Tuesday Jun 10th, 2003 8:39 PM
It's also too bad that the France would not send a single soilder into the Rhineland in 1936, no WW2, and Hitler would have been nothing more than a footnote in history. But than again what do you expect, after all they are French.
Add a Comment
§RE: mistakes
by king rockefeller
Wednesday Jun 11th, 2003 4:59 PM
actually, they are Freedom.

another mistake - America sitting on its ass until Pearl Harbour. the yankees did nothing until the war came home and then they take credit for spreading freedom, democracy, blah blah blah.....

again, if it wasn't for a certain "segement" of the American population then there would have been no reason for the French to go into the Rhineland.

say it with me now - "HYPOCRITE!!!!"
Add a Comment
§RE: Brute Force = Change
by living in amerika
Thursday Jun 12th, 2003 6:48 AM
Chris Lamb, you make some good points. I am 23 and live in chicago. I am also just about the only one of my friends who follows/cares about politics.

During the bombing of Iraq, people in general couldn't stop soaking up foxnews or cnn, but now that the "action" is over, no one follows up on anything. I think the problem with us as americans is that we are lazy. The news being presented on the television is an amazing concept. People don't have to read a paper or an online source. We can just lie on the couch and have someone else tell us all the "important" things. And the reports are generally very concise and superficial. No need for any critical thinking whatsoever. Most people either accept at face value what the TV tells us, or are too lazy or cynical to care or do something about it.

Do I have all the answers to creating a more educated society? Probably not. But I think it's important to identify some of the factors that lead to the dolorous (a great word, look it up) situation we seem to be in.
Add a Comment
Support Independent Media
We are 100% volunteer and depend on your participation to sustain our efforts!