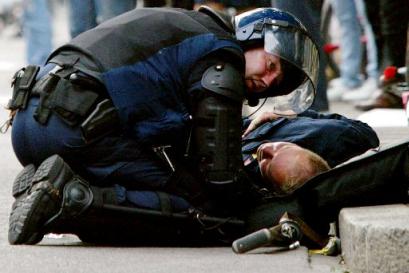 00.30 Geneva Police is still active in the streets of Geneva, but they have fewer and fewer people to arrest as people are writing press releases and sleeping. In the face of the massive repression that has gone on in Geneve, activists have shown, once more, that working together with mutual respect for different tacticts can be very effective. Solidarity is our strength!

23.45 Geneva Report that Martin Shaw, the activist injured on Sunday isstill in serious condition but left the intensive care unit. He will probably be flown back to Barcelona on Friday.

22.20 Geneva (from IMC CH) The police took away the legal team's vests in the center city.

23.10 Geneva Source police: 18 people have been arrested today and 2 more taken to hospital. Reports that police confiscated the Legal Observes dossier in thecenter of town.

23.00 Geneva Geneva Plaincloths police are carrying out numerous identity controls at Rues-Basses, and a medic was abused.

21.20 Geneva (from IMC-CH) Police charge towards the Medical School with water cannons. At least one person thrown to the ground.

21.00 Geneva The Legal team arrested in Plainpalais have now been released, but hey have been asked to leave the area or face arrest again. One Amnesty person has also been arrested. All the demonstrators covered by the mass arrest in Plainpalais have been released. The police moved back to their vehicles, but have since returned in greater numbers.

20.55 Geneva Police are shooting CS and rubber bullets in Plainepalais. Undercover police are driving through the demonstrators on scooters. Lots of undercover cops are arriving in the area.

20.40 Geneva Police are seaching everybody new the Synagogue near Plainpalais. Massive arrests have been made. Police are arriving in both unmarked cars and police vehicles

19.45 Geneva Boulevard Carl Vogt: Rue de Village Swiss. Many citizens are on the streets looking at what is going on. The police are using water cannon, gas, and concussion grenades, advancing down the street towards the university. Police are dressed as black bloc with red rings on their arms as identification.

19.00 Geneva Geneva Police is fighting in Parc des Bastions, in Plain Palais they are using teargas.

18.30 Geneva A demo is starting now, although according to TSR local TV, all gathering is now illegal.

15.11 Lausanne Situation is quiet. A demo ended without problems and people are leaving. Negotiations between the legal team and MP with police lead to people leaving the demo safely.

12:00 Barcelona 21 people occupied the French consulate to protest against the police brutality in the anti-g8 protests in Switzerland and France.

11:30 Lausanne The bridge-hanging is over and the entire group of 100 is heading to Place Saint-Francois.

11:00 Lausanne The antirepression demo has become a highway blockade like the one from which the UK activist fell from when his rope was cut on Sunday: two people are currently hanging from the bridge near Place Saint Francois in Lausanne to block the road.

10:30 Lausanne A peaceful demonstration of 100 people, accompanied by music, is taking place at Place Europe.

8:00-9:00 Lausanne Police came to the Camp de Bourdonette and verified the identification papers of everyone present. They then informed the camp that they had decided to close the camp that day. There is no longer anyone at Bourdonette camp. There are currently about 100 people at Place Europe in Lausanne. There is no police presence at Oulala village.

03:53 : Geneva: A truck is on its way to make a trip in Geneva in order to pick up people who might still be there.

02:16 : All the cars that went to pick up demonstrators from Place Neuve passed the border without any control, arrived at the VAAAG.

01:55 : All the demonstrators that were on the Place Neuve are now in cars, and going back to the village.

01:42 : The 2 activists who were earlier arrested on the bridge have now been released.

01:07 : An injured protester from the Geneva demo this evening is currently being treated at the Vaaag medic tent for injuries in the cheek caused by a rubber bullet.

01:03 : The Colouvreniere bridge is closed by police, consisting of at least 50 swiss and german policemen and a watercanon; police charge in the rue de la Coulouvreniere.

00.53 : It seems there are still 500 people still trapped in Pont Neuve. Those who try to get out are charged by police.

00.20 : The demo that was on the pont du Mont-Blanc bridge went through security lines, they're now going to Place Neuve. There are parliamentary people at Place Neuve already.

00.00: People are allowed to leave the bridge in small groups. Just after this police fire large quantities of gas at the thousands of people in the surrounding streets and charge at them scattering people across town. During the next half hour many are driven towards the location that the bridge protestors are heading towards. Riot police are now everywhere and a large number of undercover cops are in geneva city. Photos of Pont Mot Blanc

23.50 : Demonstrators are slowly moving to the end of the bridge. Cops are currently moving to allow a water canon to get in.

23.30 : Police have closed the lines on the bridge. People are pushed back by cops and leading demonstrators to placeneuve, where a large contingent of riotcops is situated.

23.20 : Police are preparing to close the lines, everybody who has not left by then will be dispersed.

23.15 : Solidarity is shown from surrounding demonstartors outside the police line at the bridge.

23.05 : Police is now uasing tear gas grenades and moving towards the crowd. Many reports of people being ijured in the bridge as well as all over the city.

23.00 : Two French activist have been arrested at the bridge. Police have raised metal barriers as they negotiate with the demonstrators. They want to search all demonstrators, before they are allowed to join the solidarity demo. But this solidarity demo has been dispersed, and police is chasing it through the city. From Radio Lausanne stream.

22.30 very roughly: police has given 15 min to demonstrators to leave the bridge one by one as they search all of them individually. If demonstrators don't agree to this, they will be arrested. At the same time, police are firing water from water canons to demonstartors that arrive to the bridge. There are people injured on the bridge Mont-blanc. The police does not allowe the ambulances to go through stating that : if they want to step up in the ambulances they need to come to us first".

22.09: On the bridge Pont Montblanc: the negotiations continue, as well as the tension. The attempts by some parliamentarians continue. The police, in spite of having giving their word that they would not escalate the tense situation, are continuing to fire concussion grenades, rubber bullets and tear gas towards the crowd. It seems that the situation is extremely tense and no resolution is on sight. The official warning is that "if they attempt to enter the red zone, it will get very nasty for them,". Read a report in italian and another one in french.

22.00: The situation is beginning to degenerate. Demonstrators have been given 15 minutes to leave the place. This from Radio Lausanne stream. Read report in italian about water canon and ultimatum..

21.45: Some lawyers and some swiss parliamentarians have gone to the area to intermediate in negotiations.

21.30 roughly: The pirate ship was stopped by police.

20.00: people is still trapped inside police cordon, and negotiating with police a way out.

19.30 (roughly, and for some time now): is now confirmed that 8 british people are, on a pirate ship made of oil drums, in the lake, being chased by 4 police boats.

18.30 (roughly): people taking part in the two demos around Geneva, joined at Montblanc Bridge (Geneva), where police used contusion grenades against protestors, and them moved to suround them.

18.00 (roughly) Reports of two simultaneous demonstrations: one in front of the WTO, not moving and surrounded by loads of cops in army style and another one a kilometre down the street. There is one german water cannon in the scene, as well as riot cops.

17.30 about 100 riot police with two water cannons have just lined up in front of WTO, 154 Rue de Lausanne, just about 100 meters away from demonstrators. They have cut off the demonstration that was coming from the Central Station to support them from Annemasse or Lausanne, heading up from south, and all the south streets in front of the WTO, are now confirmed to be blocked by cops.

16.10: The bulk of the demonstrators leaving Annemasse for the water privatization demo at the WTO have been delayed. It is now 10 minutes after the train was scheduled to depart, but it is still sitting there. Police have reportedly been seen talking to the train operators. On the bright side, the train workers, who are scheduled to go on strike tonight at midnight, have spontaneously given all of the demonstrators half-price tickets for the ride.

16.20: 50 riot police have just shown up on the platform and have entered the train, searching people's belongings. They have made one arrest so far. The demonstrators are still on the train.

16.47 Geneva the demonstrators were forced off the train one by one and their belongings searched. They were then allowed back on the train and are now leaving the station. 3,000 Geneva people are already demonstrating against water privatization at the WTO. 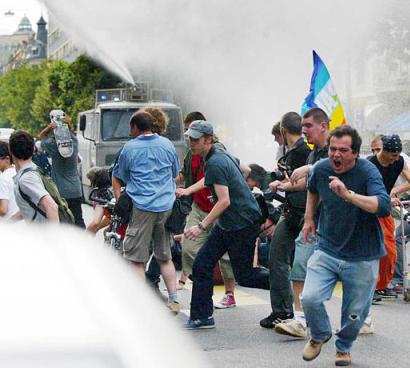 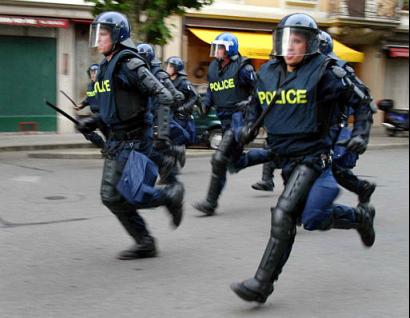 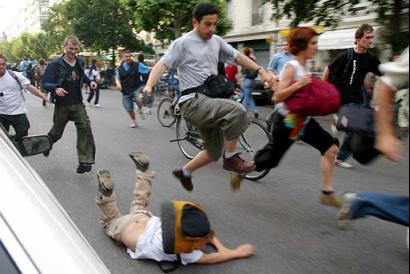 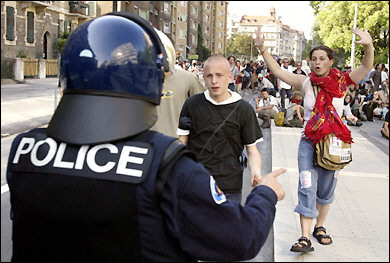 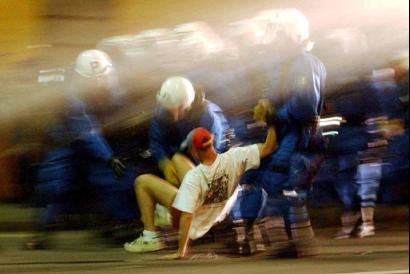 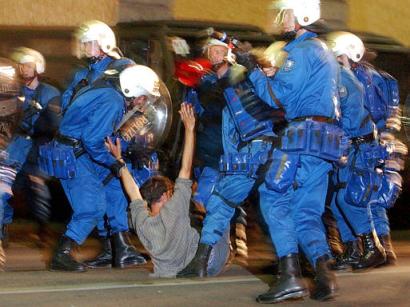 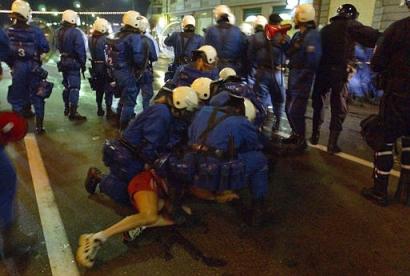 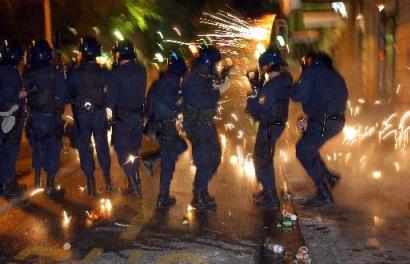 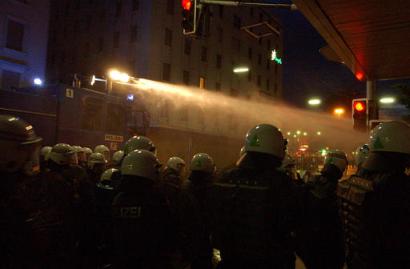