Add an Event
Newswire
Calendar
Features
Home
Donate
From the Open-Publishing Calendar
From the Open-Publishing Newswire
Indybay Feature
Publish to Newswire
Add an Event
Related Categories: Palestine
120 Christian Homes In Jerusalem Area To Be Demolished By Israeli Soldiers
by Israeli Committee Against House Demolitions (info [at] icahd.org)
Tuesday May 6th, 2003 1:18 AM
The new homes were built by a group of limited income Palestinian Christian families who banded together as the Arab Orthodox Housing Project to build a new life. They obtained a 99-year lease from their Church, the Greek Orthodox Church, 22 years ago and then began the agonizing process of organizing and saving enough money to start construction. Thanks to Israel and our country's support of their policies, Christians are becoming an 'endangered species' in the Holyland. Right Wing Conservative Christians here in the U.S. actually help make this happen by supporting Ariel Sharon. 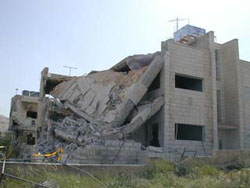 Israeli courts have upheld an Israeli Army order to demolish 120 newly built Palestinian homes in Beit Sahour, a Palestinian town adjacent to Bethlehem. Residents today demonstrated against the order and launched an international campaign to save their homes.

The new homes were built by a group of limited income Palestinian Christian families who banded together as the Arab Orthodox Housing Project to build a new life. They obtained a 99-year lease from their Church, the Greek Orthodox Church, 22 years ago and then began the agonizing process of organizing and saving enough money to start construction.

"We were renters for 40 years," Dalal Awad, a mother of five told me. "We saved for 22 years and built this home with our neighbors. It cost $42,000. We built it with our hearts, our own labor. Now the Israelis want to kill our dream."

A year ago the first families moved in, even though Israel refused to provide electricity and the road to the homes was not completed. More than 40 families now live there. The entire project will house 850 people.

Hanan Bannourah, her father, 82, and her mother, 78, settled in March 2002, as did her brother's family of seven in a neighboring unit. "The Israelis bulldozed our first home in 1991. We saved and saved to build our new home." Then, at the end of May, Israeli police and soldiers told them they planned to destroy it.

Israeli courts recently rejected the residents' appeal. Now they will take the case before the Israeli Supreme Court.

"Israel wants to protect their settlers just over the hill [in Har Homa] says Ms. Bannourah. "They are trying to surround Bethlehem with their new settlements, and to cut it off from Jerusalem. They are trying to take over all of Palestine."

A new Israeli bypass road is being built to Har Homa that will surround and then cut right through Beit Sahour. Har Homa will house 30,000 Israeli Jewish settlers. Beit Sahour consists of Christians and Moslems living side by side, resisting the Israeli military occupation.

According to the Oslo Agreement, Beit Sahour is part of Area B, which means it is supposed to be under joint control of Israel and the Palestinian Authority. The municipality is supposed to have control over land use.

The Arab Orthodox Housing Project received permits from Beit Sahour to build, and was on the verge of completing the entire project when Israel sent its demolition order. Suddenly Israel claimed the land is in Area C and therefore completely under its control.

No one knows when the Israeli Army plans to destroy the homes. But the residents are not waiting.

"We know that when Israel decrees an order they do not care whether families will be made homeless." To fight, the families have launched an international information campaign to save their homes. They plan to march and organize a hunger strike.

http://www.icahd.org/eng/news.asp?menu=5&a...
Add Your Comments
LATEST COMMENTS ABOUT THIS ARTICLE
Listed below are the latest comments about this post.
These comments are submitted anonymously by website visitors.