The Revolution of 25 April 1974 in Portugal put an end to a forty-eight year old dictatorship, opening the country to democracy. 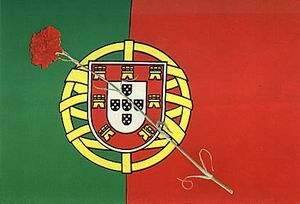 The Revolution of 25 April 1974 in Portugal put an end to a forty-eight year old dictatorship, dominated by a political police force, the so-called PIDE. After Salazar's death in 1968, the new prime- minister Marcello Caetano attempted the gradual opening up of the regime (the Marcellist Spring), but the dictatorship had grown so corrupt that a revolution broke out in the early morning hours of 25 April 1974.

Zeca Afonso's banned protest song "Grandola, Vila Morena" was broadcast on Portuguese radio as a secret signal to a group of rebel officers to move against the regime. The army, tired of the bloody and useless war in remote colonies in Africa, led the Revolution. Most of the leading military officers of MFA (Armed Forces Movement) were involved in left-wing activities.

The Revolution was quite peaceful. It was called the Carnations Revolution because carnations were in bloom at that time of the year and were placed in the guns of the soldiers. The forces of the "ancien régime" surrendered with little resistance. Workers and peasants long denied any rights allied to the left-wing military to build a socialist society, demanding land reform and nationalization of factories and banking.

In the subsequent two-year period, there were six provisional governments, two presidents, a failed right-wing coup attempt, a failed left-wing coup attempt, three elections, seizures of land, factories and housing by the workers, bombings and strikes; while the country was flooded by millions of Portuguese settlers escaping from ex-colonies at war, economy was subject to sabotage and pressure from the internal right-wingers and external NATO allies led by hte US government .

The national euphoria did not last long. In spite of the coherent "three D's" political program, which promised Democracy, Decolonization and Development, the MFA was not a unified body. Some officers wanted a liberal democratic state while others sought radical social transformations. A new military coup in November 1976 deposed the left-wing provisional government and restored capitalist order.

Yet, surprisingly and contrary to the expectations of most observers, national political leaders committed to a democratic system, laid down by the Constitution of the Portuguese Republic that was approved by the Constituent Assembly on 2 April 1976.
Add Your Comments
Support Independent Media
We are 100% volunteer and depend on your participation to sustain our efforts!