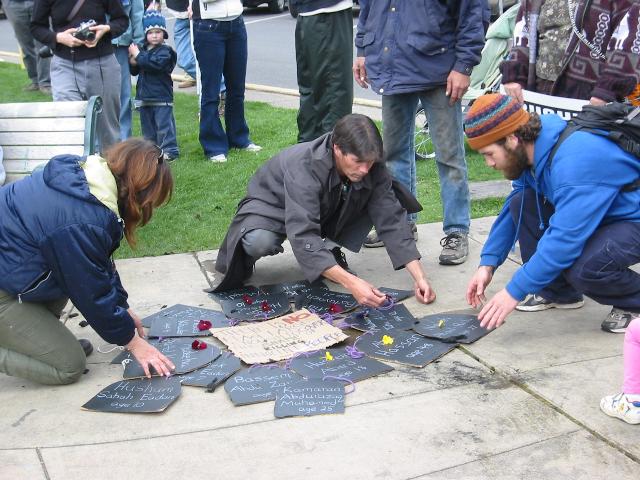 The charges of Reckless Endangerment stem from allegations that an unnamed woman and child were "willfully and maliciously endangered" by the actions of the defendents.

Paula and Noah Sohl were present in the courtroom and gave a statement to the press about their experience on Saturday. They claim to be the "unnamed woman and child" present at the protest, as they were sitting in the bench near the flag burners. Mrs. Sohl said the individuals went to, "an empty space on the plaza to burn the flag." She said the act was "done carefully" and with respect.

"It was a sober moment, to see the strength of their feelings," said Mrs. Sohl. She and her son "were not in any danger" as the flag was "burning out on the ground." She added that she is "happy that this is a country where we can burn the flag," and that it was done because the individuals "don't believe the government is supporting the views of the public regarding the invasion of Iraq."

'John Doe' has refused to cooperate with the booking process, and is therefore being denied access to a phone. He will not be appointed an attorney until he gives his name and finger prints.

Both individuals are scheduled for pre-trial hearings on April 28 at 1:30 pm. They are being held in Jackson County Jail on $25,000 bail.

report from the rally:

A peaceful feeder march ending on the plaza was marred by arrests of two flag burners. The protesters were exercising their freedom of expression, burning the flag in denouncement of the US invasion and occupation of Iraq. Police swooped in, stomped on the flames, and arrested the protesters on trumped-up charges of reckless burning.

Other protesters, acting in solidarity with the arrestees, followed the arresting officers onto Main Street shouting, "This is what democracy looks like!" and "Police State!" as the flag burners were hauled into squad cars.

Many of those remaining were shaken and angered by the unreasonable arrest. A group of protesters continued the action, placing simulated tombstones of Iraqi civilians, flower petals and a sign bearing the Howard Zinn quote, "THERE IS NO FLAG LARGE ENOUGH TO COVER THE SHAME OF KILLING INNOCENT PEOPLE" onto the ashes of the burned flag.

Later, APD officer Bon Stewart began dismantling the makeshift memorial. A few women asked him what he was doing and stated that they wished to keep the tombstone signs. Stewart stated that he needed to photograph evidence and shoved one of the women as she stooped to pick up her sign.

Peace activist Paul Copeland stated that the Ashland police made a serious misstep and that "This is an excellent opportunity for public education."

another report from the rally:

In solidarity with millions marching for peace and justice across the world, Ashlanders converged on the plaza downtown for a peaceful demonstration against the occupation of Iraq by the U.S. military.

Two marches converged on the downtown plaza in Ashland on an international day of action against the military occupation in Iraq.

At Garfield Park, around 75 people assembled at 11:00 am, and proceeded to the plaza with drummers and a gamelan ensemble and tombstones of Iraqi children and adults killed in the invasion. There was a heavy police presence throughout the march, though no incidents occured as the marchers were peaceful and complied with police requests to stay on the sidewalks.

When the march arrived in the plaza, it met up with the Peace House rally. Many speakers took the microphone to offer solutions to the war machine and critiques of the current situation in our government.

Two individuals burned an American flag and were quickly arrested and hauled away by Ashland Police Department. Despite Constitutionally protected rights to free expression, APD charged the two with Disorderly Conduct and Reckless Burning. They are being held in Jackson County jail until an arraignment scheduled for Monday at 1:30 pm.

Controversy erupted on the plaza following the flag burning and subsequent arrests. Many people laid the tombstones with Iraqi names and ages in the ashes of the burned flag, in an eerie memorial to the senseless death rained down on the innocent in the streets of Baghdad, Mosul, Basra, Kirkuk, and all the other villages throughout Iraq. Many others expressed disgust at the flag burners for dividing the movement.

In the simplest terms, a small hand-painted sign quoting Howard Zinn, laid in the ashes of a burned flag said, "THERE IS NO FLAG LARGE ENOUGH TO COVER THE SHAME OF KILLING INNOCENT PEOPLE".