Add an Event
Newswire
Calendar
Features
Home
Donate
From the Open-Publishing Calendar
From the Open-Publishing Newswire
Indybay Feature
Publish to Newswire
Add an Event
Related Categories: Anti-War
Road Rage at Bikes Not Bombs
by A legal observer
Wednesday Apr 9th, 2003 2:14 AM
The ongoing Bikes Not Bombs demonstrations, which occur every business day in San Francisco, suffered a second day in a row with a major incident when road rage erupted toward the end of the Tuesday, April 8, 2003 ride. The day before, police issued twelve false citations. 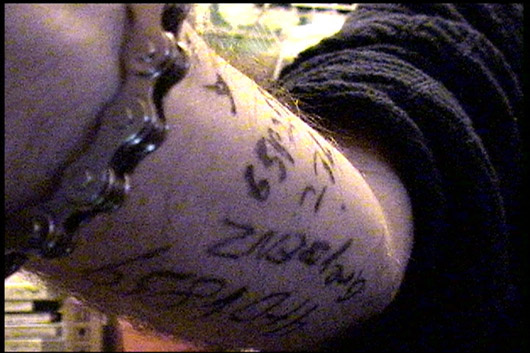 [PHOTO above: results of a day of motor vehicle assault, lots of license plate information on arm ("massertats").

The ongoing Bikes Not Bombs demonstrations, which occur every business day in San Francisco, suffered a second day in a row with a major incident when road rage erupted toward the end of the Tuesday, April 8, 2003 ride. The day before, police issued twelve false citations.

It had been another positive, peaceful, rewarding Bikes Not Bombs ride on a beautiful day in San Francisco, not a cloud in the clear blue sky as bicyclists brought their message of peace through personal responsibility by reducing oil dependence to the streets. Occupying only the right-hand lane and allowing buses and trains to pass, the riders enjoyed a great deal of positive support as they chanted, "Bikes Not Bombs! Stop the War!"

When passing by groups of people, the chant was tailored to appreciate them personally. At bus stops it was, "Busses not bombs!" At the chess games along Market Street, it was, "Chess not Bombs!" And a very special chant erupted at Civic Center where Food Not Bombs was serving, with each group calling the others' name out in succession, as a sign of joyous solidarity. The ride was so upbeat that some began suggesting a day when the group would ride in silence, with only black arm bands. Another said he hoped for the day when one of the mass marches were totally silent in respect for the gravity of the tragedy of the war.

The group turned right off Market onto Van Ness, which they followed past City Hall and all the way to its end, receiving cheers and honkity-honks of support even from some SUV and other truck drivers along the way. Some riders hoped to travel along North Beach and show the tourists an important sight, rare in most parts of this country: bicyclists en masse, calling for peace and sanity in the world.

They never made it there.

After a harrowing ride in the Broadway tunnel, in which the driver of cab 236 assaulted the group by driving at high speed towards them and then slamming on brakes, skidding in a cloud of smoke nearly into a woman riding at the rear of the group, it only got worse. Just before Stockton on Broadway, an irate woman suffering a clear case of road rage began illegally tailgaiting the small group (now only about 7 riders) in the right-hand lane. The bicyclists were legally occupying the lane under CVC 21202(a). There was plenty of room to go around, and traffic was otherwise fairly light. The woman laid on her horn almost constantly, another violation of the Vehicle Code. After so expressing her anger and intent, she rammed a cyclist, crushing his rear wheel and forcing him to go over the front of the bike, hurting his leg. She was driving a large mercury-colored Mercedes Benz SUV. She commiteed the crime in front of 777 Broadway at approximately 7:07 PM.

The driver began calling 9-11. A legal observer also called 9-11 and explained the situation to police.

A number of officers arrived and as is to be expected from the SFPD, they showed outrageous bias and lack of awareness of bicyclists' rights. They ordered the bicyclists to the sidewalk, while discussing the situation privately with the woman who perpetrated the assault and battery. They moved the bicycle from the road under her bumper, where it had become stuck after the collision, before they photograph the womans' vehicle, thus tampering with evidence. They refused to arrest or even cite the driver, even after the victim said, "I insist upon a citizen's arrest of this driver." They claimed the crash was an "accident" despite the obvious evidence that it was an assault and battery.

The police claimed that in a non-injury crash, they do not make a report, despite the damage done and the pain the victim suffered.

Police seemed to take it personally that the bicyclists were against the war, officer O.J. Bueno # 141stating "Hallinan is dismissing all these charges from the protests because there's two sides to the story," in response to a question as to why the police would not help the victim.

On a positive note, a fire truck cruised by to see if everyone was okay, bicyclists on the sidewalk held up the peace sign and one of the firefighters, held up a solemn and steady peace sign in response, a beautiful sight.

Officer J. Heredia, #70, claimed that "a bicycle is a motor vehicle", which is why it was "an accident". He stated that otherwise, they would have to investigate every motor vehicle collission as an assault or attempted murder. Of interest, a study by Right of Way in New York City, comparing thousands of cases, found that around 90% of pedestrian and bicycle fatalities involved aggressive driving. The police are in denial about the problem. http://www.rightofway.org/

When the victim began insisting upon pressing charges to officer 1871, a white female, she said "You don't have the right to a citizen's arrest" and the police then hurried away the DPT employee who had witessed the crash, before the victim could get his contact information. Other witnesses were not able to get his information, however the attacker, with full roam of the roadway, did get to exchange contact information.

In fact, my understanding is that police are required to execute an arrest when a citizen so orders it, in part due to the authority of Penal Code section 142 and 837:

142. (a) Any peace officer who has the authority to receive or
arrest a person charged with a criminal offense and willfully refuses
to receive or arrest that person shall be punished by a fine not
exceeding ten thousand dollars ($10,000), or by imprisonment in the
state prison, or in a county jail not exceeding one year, or by both
that fine and imprisonment. [truncated]

837. A private person may arrest another:
1. For a public offense committed or attempted in his presence. [truncated]

When this legal observer continued to object to the behavior of police and their lack of fairness and lack of knowledge of policy and procedure, police made an issue of that and over the course of 40 or so minutes, after demanding to know if I were a lawyer (and being told I was a law student), they repeatedly claimed that I would not make a good lawyer and that I needed to go study for ten more years, amongst other things. Meanwhile they made outrageously false and biased statements and failed to protect the rights of the bicyclist.

Another officer stated that the sitation was "not a citizen's arrest" because if it were assault with a deadly weapon, a felony, then the officers could simply arrest once they determined there was evidence the crime occurred. Yet they refused to interview the witnesses who knew this to be true.

Officers asked the driver if she would pay for the wheel on the spot, which some witnesses thought would be the most expedient way to handle the situation, and she shook her head no. Other officers on the scene included #111, #4210 (male), and #27 (white female, brown hair). It was not possible to get more information about these officers given their separation from witnesses and legal observers who had been ordered to stay on the curb, abrogating their right to observe from a safe distance.

Officer O.J. Bueno spent at least 15 minutes perusing the vehicle code with the attacker beside her vehicle. Said vehicle, by the way, remained stopped in the travel lane for over 30 minutes as a result of the assault and battery, blocking the traffic that she was still claiming the bicyclists, who are traffic, were impeding. Yet she wasn't cited for that result, either, illustrating the great hypocrisy in the metering of "justice" against bicyclists. Bueno later explained that he was trying to help her find any reason why the bicyclists were not allowed to ride as she alleged they had been. While he admitted that she was in the wrong for striking the bicyclist from behind, he failed to understand that the bicyclists were simply travelling normally under the law, and seemed at times to use that as justification for the incident.

Despite a repeated reading of CVC 21202, the officers still refused to admit that the bicyclist had the right to be occupying the the right lane even when I pointed out that the lane was substandard width. The lane is in fact exactly nine feet, the smallest possible width allowable for a travel lane! Clearly it is substandard width.

When I told the police that the police had been directed officially to recognize that right, they again chided my lack of legal ability, disbelieving me.

In fact, here is the resolution of the SF Supervisors, adopted in January 2000. It is right on point.

WHEREAS, Bicycling is a growing form of transportation in San Francisco;
and,

WHEREAS, Bicycle use is considered beneficial to the City, as the
Transportation Element of the City and County of San Francisco's Master
Plan states: "Active encouragement of bicycle use as an alternative to
automobile use, whenever possible, is essential in light of the
continually increasing traffic congestion caused by motorized vehicles
which aggravates air pollution, increases noise levels and consumes
valuable urban space;" and,

WHEREAS, Bicyclists and others using non-motorized modes of transportation
are entitled to equal protection under the law; and,

WHEREAS, Both bicyclists and motorists are required to obey traffic
signals, respect rights of way, and operate their vehicles in a safe
manner; and,

WHEREAS, According to the City's Master Plan: "Traffic enforcement should
extend to protection of bicyclists' rights-of-way which are often violated
by motorists;" now, therefore, be it

RESOLVED, That the San Francisco Board of Supervisors urges the San
Francisco Police Department (SFPD) to examine it General Orders and
programs in order to ensure equal treatment of bicyclists and motorists in
upholding the law, and urges the San Francisco District Attorney's Office
to examine its current policies in order to ensure fairness to bicyclists
and motorists in prosecuting criminal cases; and, be it

FURTHER RESOLVED, That the Board of Supervisors urges the SFPD to develop
a bicycle and pedestrian component of its training program for new cadets
and continuing education for officers to ensure their understanding of the
laws pertaining to cyclists and pedestrians; and, be it

FURTHER RESOLVED, That the SFPD and District Attorney track the number of
injuries to bicyclists in traffic incidents as reported to the Department
of Public Health during the next six months, as well as the number of
criminal charges filed as the result of traffic incidents involving
injured bicyclists (including doorings, hit-and-run incidents, and
vehicular assaults) during those same six months, and report back to the
Board of Supervisors on the advancement of the cases; and, be it

FURTHER RESOLVED, That deliberate physical harassment of bicyclists or
pedestrians by motor vehicles be recognized and treated legitimately as
assault with a deadly weapon.

One final note: in 2001, there were 236 formal complaints about taxicabs (http://www.sfmuni.com/rid/pcc/pc010808.htm). A funny coincidence that cab 236 was the first motor vehicle to assault the group on Broadway.

http://www.bikesnotbombs.net/
Add Your Comments
LATEST COMMENTS ABOUT THIS ARTICLE
Listed below are the latest comments about this post.
These comments are submitted anonymously by website visitors.