More description of the contents will be posted below.
http://www.actagainstwar.org/
§Protest the War! BIKES NOT BOMBS!
by Veloboy Tuesday Mar 25th, 2003 12:13 PM 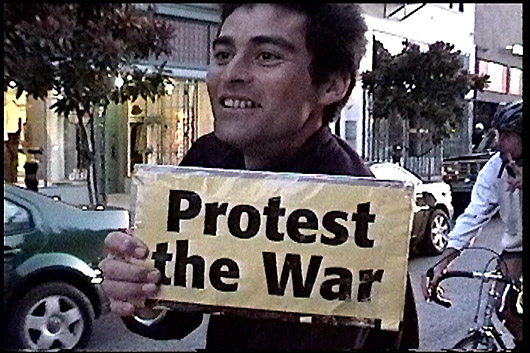 Proudly showing his sign after an onslaught of police sirens and the ride rolls proudly on.
http://www.actagainstwar.org/
§Onward cyclin' soljas!
by Veloboy Tuesday Mar 25th, 2003 12:13 PM 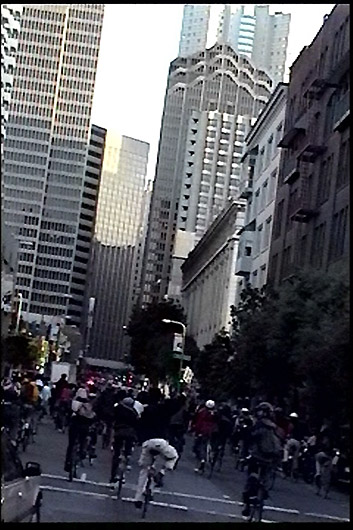 Into the financial district...
http://www.actagainstwar.org/
§Broadband VIDEO
by Veloboy Tuesday Mar 25th, 2003 12:13 PM
Copy the code below to embed this movie into a web page:
Download Video (14.1MB) | Embed Video
I'll try to post more of the content log later, here are some highlights:

* Identifying a cameraperson as being with corporate media, then chanting loud and fast so the message would get through but one rider went up to the camera and said "corporate media" in between the pauses, so the cameraman turned on him and rebuked him that his message wouldn't get out if he did that. Earlier there had been an asian cameraman in black who someone suspected of being part of the sfpd red squad, who would not say who he was with when asked. In fact the group got on KGO (notorious for casting bicyclists and especially Critical Mass in a bad light). The "red valkyr" helicopter followed the ride a number of times.

* Splitting up at City Hall by accident and regrouping with cheers at the Federal Building.

* Taking the "BICYCLES ONLY" Bikeway along the bike mural, losing most of the cops (did they just go home?)

* Passing someone in a Car Share little green vehicle

And so much more, enjoy!

http://www.actagainstwar.org/
Add Your Comments
LATEST COMMENTS ABOUT THIS ARTICLE
Listed below are the latest comments about this post.
These comments are submitted anonymously by website visitors.