Newswire
Calendar
Features
Home
Donate
From the Open-Publishing Calendar
From the Open-Publishing Newswire
Indybay Feature
Publish to Newswire
Add an Event
Related Categories: Iraq | Anti-War
Denmark's pro-war premier attacked with red paint
by escalate the protest
Tuesday Mar 18th, 2003 5:38 PM
An anti-war protester has hurled red paint at Denmark's prime minister shortly before a press a conference where he was set to back US military action against Iraq. 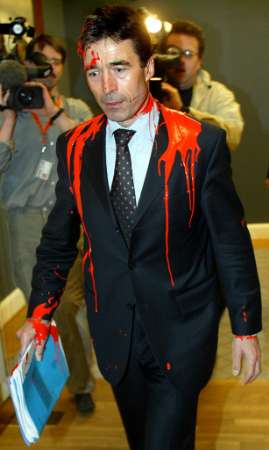 Anders Fogh Rasmussen was unhurt, but postponed the press briefing in Copenhagen.

The protester - overpowered by parliament security - shouted "You've got blood on your hands," as he was taken away.

Foreign Minister Per Stig Moeller was also hit by splashes of paint in the incident inside the parliament building.

The Danish government is expected to contribute a warship and submarine in a war against Iraq.

It is unclear how the protester, who wasn't identified, managed to get inside the building, or what charges he could face.
§Supporting Bush Is Supporting Terrorism
by escalate the protest Tuesday Mar 18th, 2003 5:38 PM 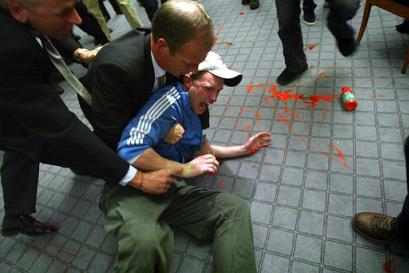 An unidentified protester is overpowered by parliament security after he threw red paint on Danish Prime Minister Anders Fogh Rasmussen in the Parliament Tuesday March 18, 2003. The protester doused Rasmussen with paint as he was on his way to a news conference in an apparent protest against the government's pro-US stand on the Iraq -AP
§Supporting Bush Is Supporting Terrorism
by escalate the protest Tuesday Mar 18th, 2003 5:38 PM 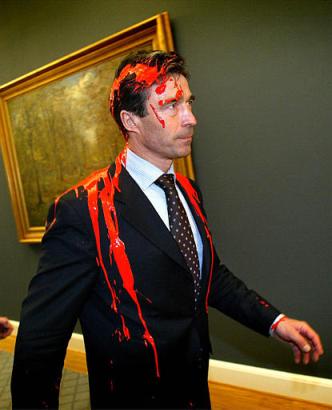