by Bikes Not Bombs!
BICYCLISTS HAVE SPECIAL DEMONSTRATION POWERS! JOIN IN ALL-DAY ROLLING PROTESTS AGAINST THE OIL WAR! 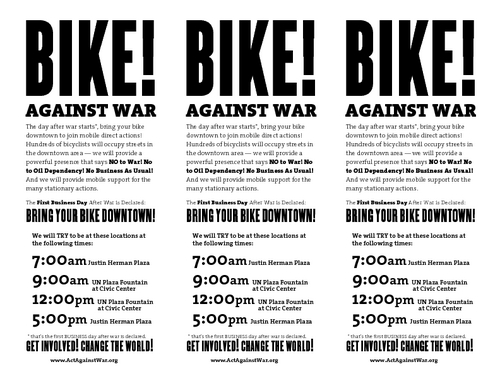 Download PDF (188.7KB)
* EAST BAY PEOPLE: Do not count on ANY transportation to San Francisco being available the day of the war. Make arrangements to stay in the city the night before. Flyer for bikes also posted to this site: http://www.scorcher.org/screed/changing.html#againstwar ** A note to those who will say that once war is declared the time for protest is over: We believe resistance is more important than ever! History has shown that resistance during wartime restrains the hand of violent war planners, shortening war and limiting options (Nixon and Kissinger reportedly opted against the nuclear option for fear of chaos at home, for example). In a situation where our country has all but promised the use of nuclear weapons (!), we have a responsibility to impose severe social and financial costs on a political class that is out of control. FOR MORE INFO: http://www.ActAgainstWar.org
END_OF_DOCUMENT_TOKEN_TO_BE_REPLACED
§Act Against War!
by Bikes Not Bombs! 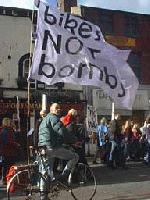 Action Plans and Targets for the Next Business Day After the War Starts:

END_OF_DOCUMENT_TOKEN_TO_BE_REPLACED
Add Your Comments
Latest Comments
Listed below are the latest comments about this post.
These comments are submitted anonymously by website visitors.
TITLE
AUTHOR
DATE
CRITICAL MASS Friday!!
Rocco
Biking
Biker
Biking
Biker
no it's attempted murder
bikers for peace
Is it legal to run over a bicyclist?
poor and pissed
So what about Friday?
RP
bump
bump
a little story
round and round
cheap bikes
cp
all options exhausted
time to shut down the city
Support Independent Media
We are 100% volunteer and depend on your participation to sustain our efforts!