Add an Event
Newswire
Calendar
Features
Home
Donate
From the Open-Publishing Calendar
From the Open-Publishing Newswire
Indybay Feature
Publish to Newswire
Add an Event
Related Categories: Police State & Prisons
In an unpermitted march on 3/15, the SF Police falsely arrested sidewalk marchers.
by ArcMedia (arcmedia [at] riseup.net)
Sunday Mar 16th, 2003 11:21 PM
I followed the unpermitted march beginning at Jefferson Park and I was appalled at the unnecessary harassment by the SFPD. 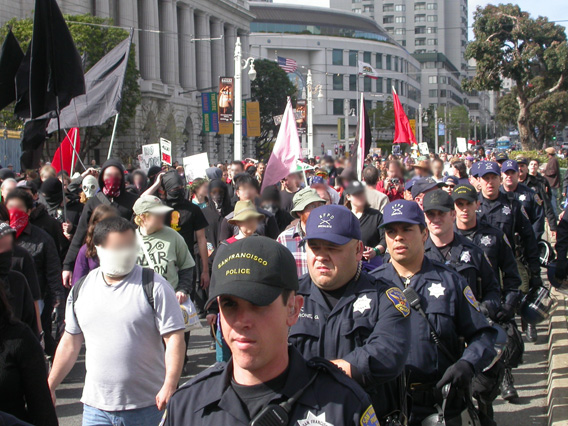 I followed the unpermitted march beginning at Jefferson Park and I was appalled at the unnecessary harassment by the SFPD. They swarmed throughout the march from the front, on both sides, and in the rear almost the entire way. No property destruction occurred and the protesters were completely non-violent, yet the police were ruthless in their drive to quell the constitutionally protected rights of free speech and free assembly.

The police declared the march an illegal assembly on several occasions including Mission Street at 3:45pm and at about 4:30pm on 3rd street:

"This is the SFPD. To all people now assembled on the __ block of __, this is an unpermitted march and will not be facilitated by the SFPD. All persons remaining in the street from this point onward will be subject to immediate arrest. Get on the sidewalk..."

After these orders to "get on the sidewalk," the police subsequently arrested people on the sidewalk. Some of these people were sitting down and linking arms in protest, others were attempting to disperse, some were journalists, and still others were shoppers. At the entrapment on 3rd St., I purposely decided not to get arrested and barely stepped outside the line of helmeted policemen before they blocked sidewalk movement. It wasn't so easy for many observers.

The San Fransisco police stepped outside their legal boundaries in terrorizing people who practice their constitutional rights. Such is the behavior of most hierarchical, capitalist oppressors. For me, this Saturday's protest underscored the need to set our own agenda of creative resistance instead of reacting to the agenda of the powerful elites. 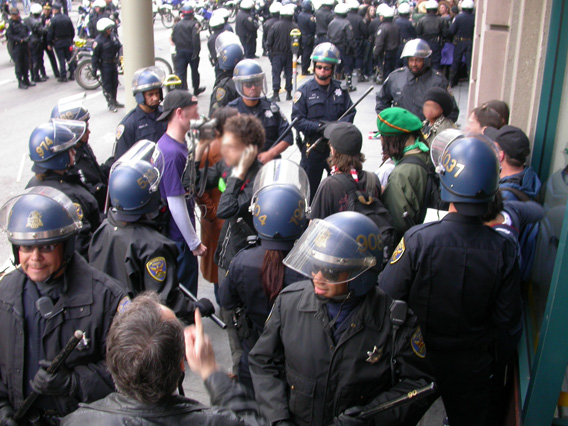 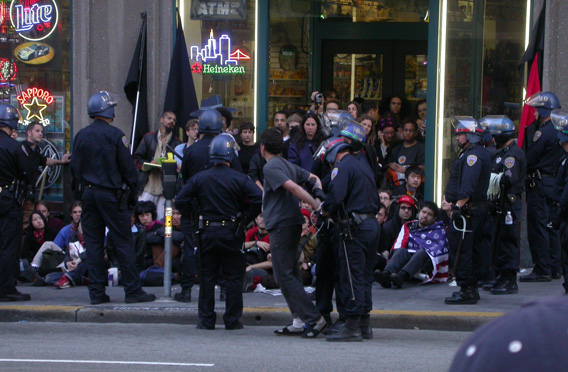 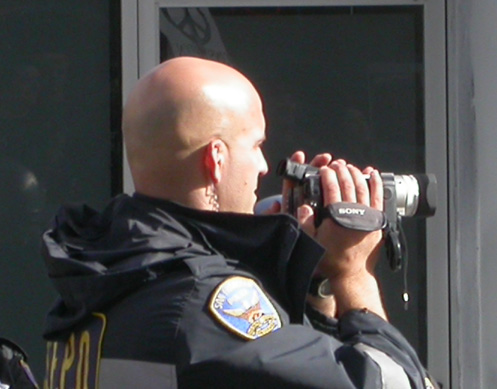 I think it's great that we surveil, photo and ID the cops too - especially the worst abusers and plain clothes infilitrator cops. We need to build photo files and ID files, histories, behavioral histories and tactics, and dossiers on the cops too, so that everyone knows who they are.

Add a Comment
§Ever journey to a police state begins with a step
by chris
Monday Mar 17th, 2003 2:27 PM
Maybe because there is nothing illegal about standing on a sidewalk.

Furthermore, it is the role of citizens living in a Democracy to have their voices heard and to influence elected officials, which sometimes includes Civil Disobedience. It is not the role of the police to influence the activity of anyone, especially through illegal harrassment and brutality. There job is to follow and enforce the law.
Add a Comment
§Waste of Time
by Will Croft
(willcroft [at] hotmail.com) Tuesday Mar 18th, 2003 12:03 AM
Do you really want elected officials who are going to be influenced by civil disobediance? Civil disobediance can only make a point if there's a large group. So, it's basically a mob. And any officials elected in a democracy shouldn't be influenced by a mob rule. They should be influenced by the individual citizens who elected. So I don't really think civil disobedience is going to have any kind of positive effects. Even if it works. Espically if it happens once a week.
Add a Comment
§&quot;So, it's basically a mob.&quot;
by get your facts straight
Tuesday Mar 18th, 2003 12:34 AM
It's not a mob. It's a throng.
Add a Comment
§are you sure...
by are you sure...
Tuesday Mar 18th, 2003 9:57 AM
"Some of these people were sitting down and linking arms in protest"

Didn't people do that AFTER they were penned in? I don't think anyone was doing a sidewalk sit-in until they were all forced into a standing-room-only pigpen for upwards of an hour, and it looked like they were going to be arrested.

If they did do a sit-in across the entire sidewalk, that may have given the police justification for their arrest under some legal theory, and changes the story somewhat. As someone who was arrested, I didn't see that.