Add an Event
Newswire
Calendar
Features
Home
Donate
From the Open-Publishing Calendar
From the Open-Publishing Newswire
Indybay Feature
Publish to Newswire
Add an Event
Related Categories: Anti-War
Political Repression In SF: Is Richard Bruce, Proof Of A Red Squad?
by pics
Saturday Mar 15th, 2003 10:23 PM
The police in charge at the breakaway protest today were the same as at all of the large political protests over the past year. Many of these police seem to only be in charge when a "disturbance" is political. 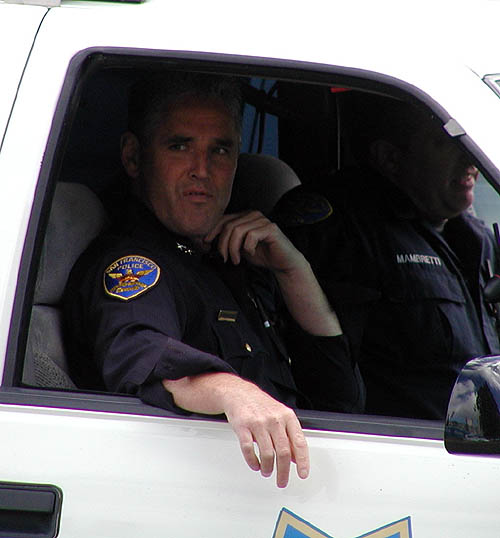 Having a "red squad" (a police unit designed to monitor and harass those who have left leaning political views) is illegal. But all evidence points to the existence of this in the supposedly progressive city of San Francisco.

"We recognized that the events of 9-11 forever changed the way we look at security. In line with our continual efforts to better protect the City's population, the Special Operations & Security Bureau (SOSB) was formed. The main purpose of this bureau is to enhance existing law enforcement efforts with the goal of achieving normalcy during these times of heighten alert.

The SOS Bureau will network extensively with other local, state, and federal law enforcement agencies as well as other public and private organizations. By doing this, we will strengthen our coordinating, planning and training efforts thereby enhancing our services to the community. "
http://www.ci.sf.ca.us/police/bureaus/sos/sosaboutus.htm

Basically 9/11 allowed SF to recreate a "red squad" and Richard Bruce has been in charge of keeping protesters in line ever since.

The incident today, where protesters were arrested for illegal assembly on a South of Market SIDEWALK is only the latest in a series of incidents. One of the more suspicious recent incidents is the initial refusal by the SFPD to give the IAC a permit for today’s protest. The end result was a protest that ended under the watchful eyes of a police station. The police on the roof with binoculars and cameras were not just trying to figure out about today’s action; they were monitoring and taking pictures of those in the crowd to help build up better knowledge of the internal dynamics of political groups in SF.

The three officers today who seemed to be in charge during the more questionable police actions were Richard Bruce (Deputy Chief of the Special Operations & Security Bureau), Robert Puts (Commander in the Field Operations Bureau) and Captain Dennis Martel. Bruce is in the highest position so most of the blame should always fall on him.
§Building FIles On Subversives on Mission St.
by pics Saturday Mar 15th, 2003 10:23 PM 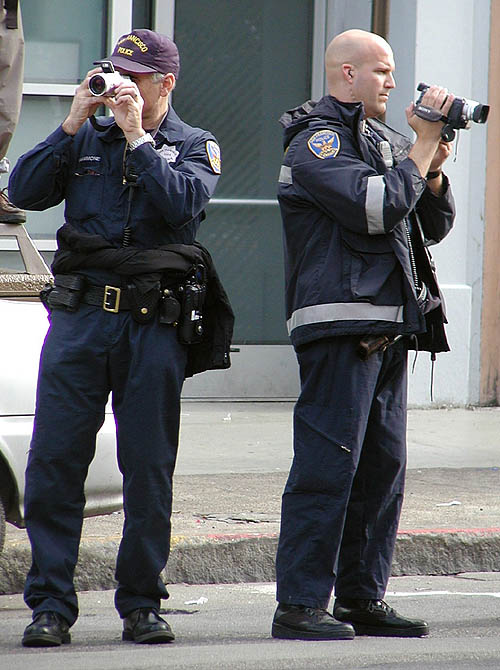 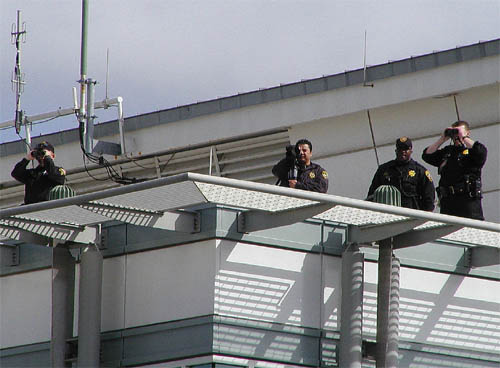 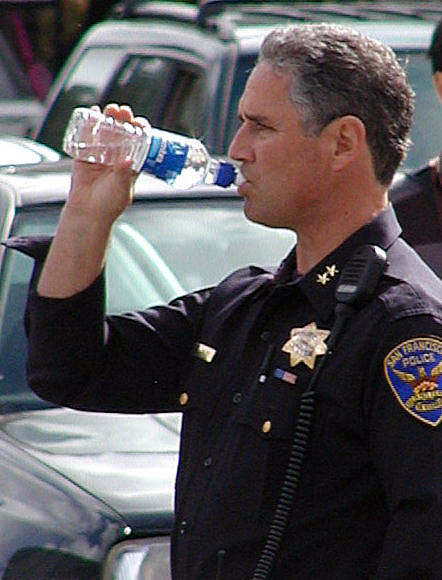 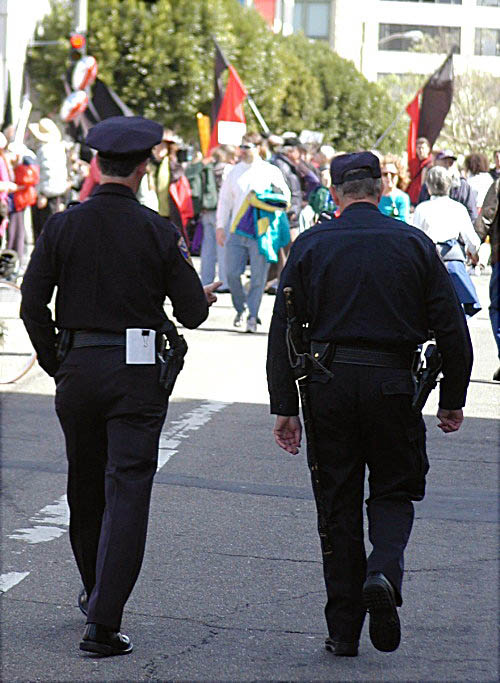 One thing about identifying Richard Bruce at a protest is that you can even tell him apart from the other cops from the back. He has a stereotypical "police chief" waddle that reminds me way to much of Chief Wiggums on the Simpsons. But hes more dangerous than he looks (afterall his position is made possible by the Patriot Act)http://www.ci.sf.ca.us/police/bureaus/sos/sosaboutus.htm
§Dennis Martle: General Nuisance at Protest In The Past
by pics Saturday Mar 15th, 2003 10:24 PM 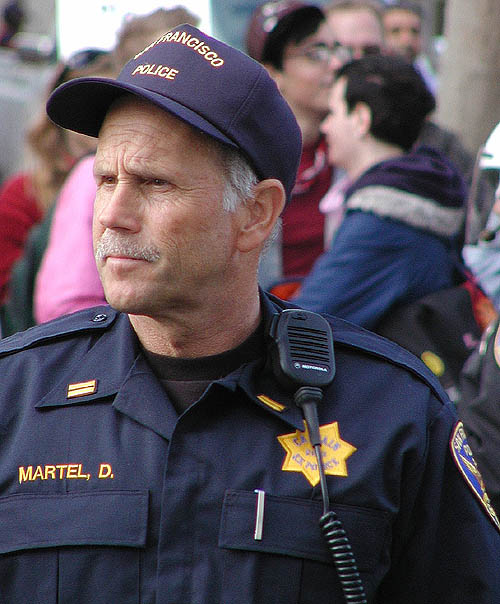 Critical Mass and other protests before 9/11 used to always complain about this guy.
§Dennis Martel
by pics Saturday Mar 15th, 2003 10:24 PM 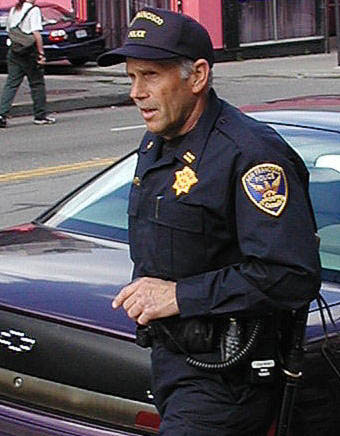 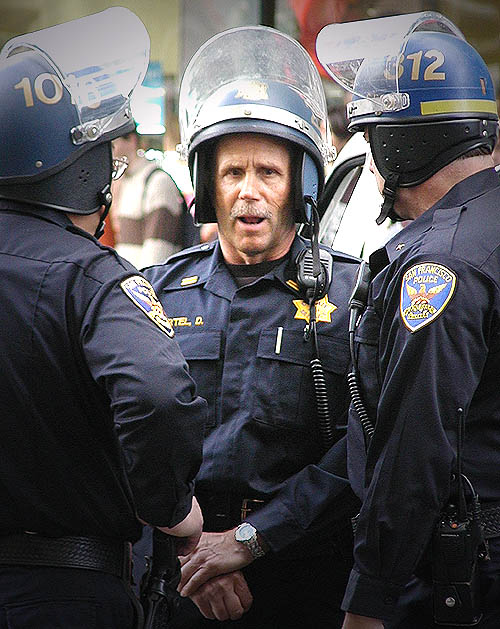 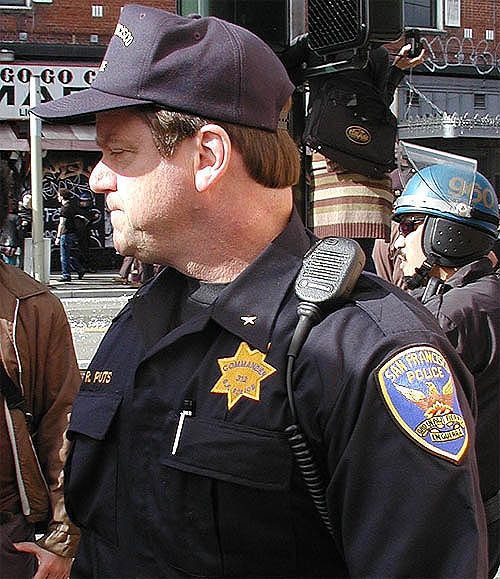 "You can't stay on the sidewalk this has been declared an illegal assembly"
§Robert Puts
by pics Saturday Mar 15th, 2003 10:24 PM 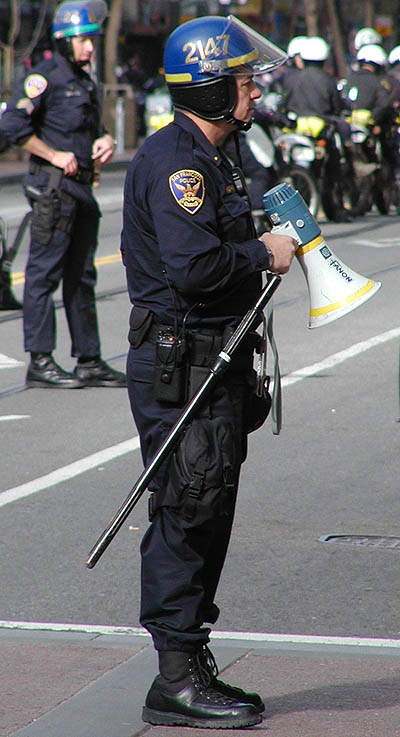 "You can't stay on the sidewalk this has been declared an illegal assembly"
§Bruce Wasnt Effected By The Latest Scandal
by pics Saturday Mar 15th, 2003 10:24 PM 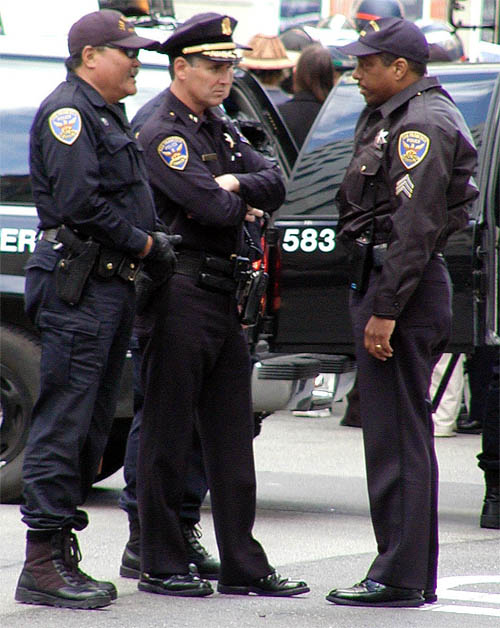 So he should be kept an eye on since his power is if anything greater after the latest police scandal:
http://www.ci.sf.ca.us/police/bureaus/sos/sosaboutus.htm
Add Your Comments
LATEST COMMENTS ABOUT THIS ARTICLE
Listed below are the latest comments about this post.
These comments are submitted anonymously by website visitors.