Add an Event
Newswire
Calendar
Features
Home
Donate
From the Open-Publishing Calendar
From the Open-Publishing Newswire
Indybay Feature
Publish to Newswire
Add an Event
Related Categories: Iraq | San Francisco | Anti-War | Police State & Prisons
Walter Langley
by David Hanks/Global Exchange (david [at] globalexchange.org)
Friday Mar 14th, 2003 8:36 PM
Former President of the Pacific Stock Exchange, Lt. Col. Walter Langley (Ret), marched with hundreds of demonstrators and made the decision to commit civil disobedience by helping to barricade an entrance of the Exchange and then sit in the middle of an intersection until he was finally arrested. During what might be the final days before an invasion of Iraq, he does not want 'business as usual'. 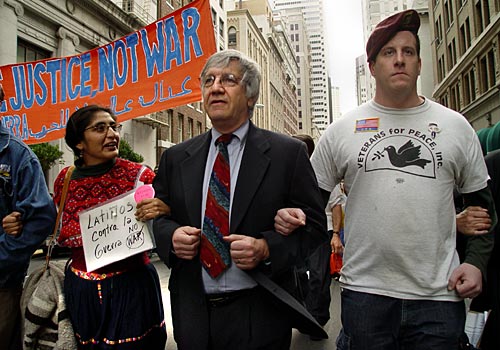 San Francisco -- More than 70 people were arrested by 10AM this morning as hundreds of protesters disrupted business in the center of San Francisco’s Financial District. Entrances to the Pacific Stock Exchange and three nearby intersections were blocked as part of an escalating national campaign of nonviolent civil disobedience to protest the Bush administrations plans for a preemptive strike against Iraq.

Arrestees including Warren Langley, former president of the Pacific Stock Exchange, along with religious leaders, community activists, labor leaders, and many first-time demonstrators who joined together to block intersections in downtown San Francisco. A large crowd, including a Gulf War veteran, and the brother of a 9/11 victim all cheered and often shouted "thank you" as activists were escorted in to armored buses from the San Francisco Sheriff’s Department.

Langley, a retired Air Force Lt. Colonel, echoed the call for people around the country to take direct action to stop the war. "I am willing to 'break the rules' and ask you to join me in 'breaking the rules' so loudly that we are heard by the President and his administration to convince them to find a way to peace not war."


Full Statement of R. Warren Langley
Opposing the US Preemptive Invasion of Iraq

My name is Warren Langley and I would like to tell you why I am opposed to the preemptive invasion of Iraq by US-led forces.

There are many ways to reduce the threat that Iraq and Saddam Hussein pose to the US and to the world. Intrusive inspections, constant pressure, and continuous over-flights coupled with the joint rather than the unilateral threat of consequences is the obvious first option. We should work with the rest of the world through the UN to minimize the threat of Saddam Hussein rather than start a war that will cause death, destruction, and harm to the people of Iraq and the allied military forces. Disarmament is a valid goal and a critical outcome; regional destabilization and regime change are not. Democracy will never follow Unilateral conquest. Beyond the direct human cost of an Iraq invasion, the economic and political consequences are monumental. The increased risk of terrorist attacks and anti-American sentiment worldwide as well as the tremendous sum of money and resources that will be diverted from vitally needed health, education, and other domestic needs will be felt for years.

There may come a time when there is no alternative but to invade Iraq but that time is not now. If enough of us can make our voices heard, Mr. Bush, Mr. Cheney, Mr. Rumsfeld, and Mr. Powell will have to consider other alternatives instead of continuing along the single-minded path toward war that they have been on for the past 18 months.

If you looked at my background, you would ask why I take such a public stand against the war. I grew up in the South. my Dad was a WW II POW, I graduated from the US Air Force Academy, spent 15 years in the active Air Force and am now a Retired Lt. Colonel in the Air Force Reserves. I have and still do strongly support our military forces and believe that it is necessary to maintain a strong military for both our own defense and to make the world a safer and better place to live. I have also spent a long career in business including time in the defense and airline industries culminating with 12 years in the financial services industry, the last three being President and COO of the Pacific Stock Exchange.

I have always worked within the Establishment and I have always been a rule-follower rather that a rule-breaker thinking that if a rule was wrong, change it, don't break it first.

So I am surprised to be here today telling you that, to stop the war, I am willing to 'break the rules' and ask you to join me in 'breaking the rules' so loudly that we are heard by the President and his administration to convince them to find a way to peace not war. We have to be heard like the people were heard about civil rights in the 60's and the Vietnam War in the 60's and 70's. people like you and me do matter and we can be heard. If we all believe that and do something about it — something more than talk, march, and discuss — then we can help find peace and security for the US, Iraq, and the world.
http://www.actagainstwar.org/article.php?i...
§Walter Langley Commits Civil Disobedience
by David Hanks/Global Exchange (david [at] globalexchange.org) Friday Mar 14th, 2003 8:36 PM 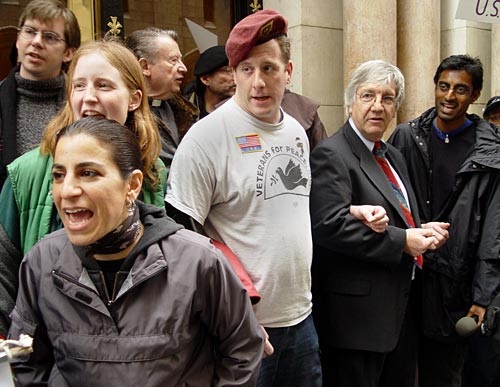 Langley commits civil disobedience by blocking the entrance to the Pacific Stock Exchange and then joined in a circle with other protestors to block the intersection of Montgomery and Bush.
http://www.actagainstwar.org/article.php?i...
§Walter Langley Commits Civil Disobedience
by David Hanks/Global Exchange (david [at] globalexchange.org) Friday Mar 14th, 2003 8:37 PM 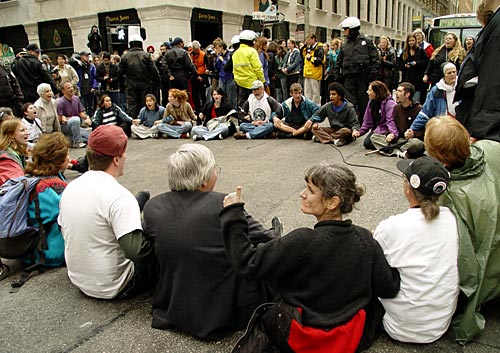 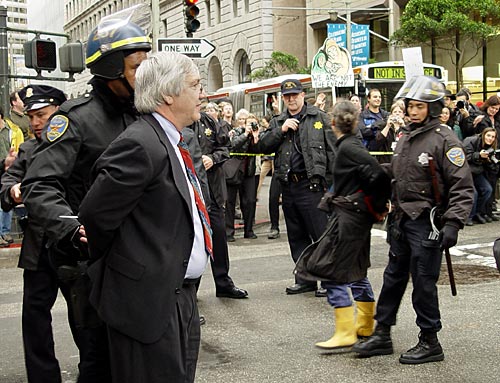 Lt. Colonel Walter Langley (Ret); Former President and COO of the Pacific Stock Exchange is Arrested by the San Francisco Police.
http://www.actagainstwar.org/article.php?i...
Add Your Comments
Support Independent Media
We are 100% volunteer and depend on your participation to sustain our efforts!