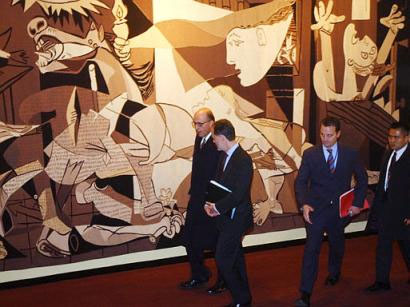 ---
The Picasso Cover-up
“A tapestry of Pablo Picasso's powerful anti-war tableau "Guernica" has hung outside the U.N. Security Council since 1985… Television cameras routinely pan the tapestry as diplomats enter and leave the council chambers… So it was a surprise for many of the envoys to arrive at U.N. headquarters last Monday…to find the searing work covered with a baby-blue banner and the U.N. logo…"It's only temporary. We're only doing this until the cameras leave," said Abdellatif Kabbaj, the organization's media liaison…”
(Betsy Pisik, The Washington Times)
http://washingtontimes.com/world/20030203-13680812.htm
---

ANTIWAR PROTEST IDEA:
Paint our own Guernicas (Baghdads) and surround the U.N. with 'em...or something like that.
Any ideas?

§Ambasssador Negroponte in front of Guernica
by T. Reason (teereason [at] yahoo.com) Thursday Feb 6th, 2003 7:06 AM 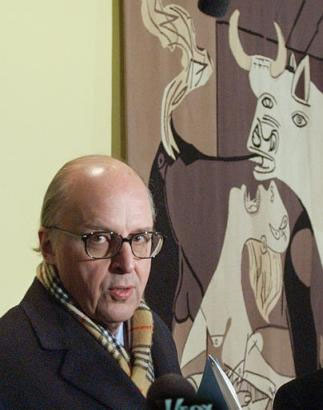 "U.S. Ambasssador John Negroponte stops to comment outside the United Nations Security Council prior to a meeting of the body, at U.N. heaquarters in New York, Friday Jan. 24, 2003. International Atomic Energy Agency Director-General Mohamed ElBaradei and chief U.N. inspector Hans Blix are due to brief the council in New York on Monday. A portion of a replica of Picasso's 'Guernica' is behind Negroponte." (AP Photo/Richard Drew)
http://story.news.yahoo.com/news?tmpl=story&u=/030124/168/3424l.html
§Blix with Guernica in Background
by T. Reason (teereason [at] yahoo.com) Thursday Feb 6th, 2003 7:06 AM 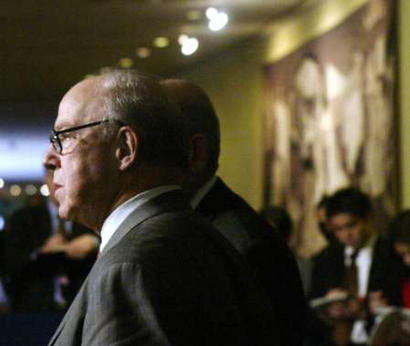 "Chief United Nations weapons inspector Hans Blix speaks with reporters outside the Security Council at the United Nations in New York in this December 19, 2002, file photo. The United Nations on Wednesday February 5, 2003 concealed behind a blue cloth and a row of flags the world body's treasured tapestry of 'Guernica,' the celebrated Picasso anti-war masterpiece. The tapestry (in the background) hangs outside the U.N. Security Council, where U.S. Secretary of State Colin Powell was presenting the U.S. case that Iraq is hiding weapons of mass destruction and war may be needed to make sure it disarms. But U.N. officials insisted no symbolism was intended in the decision to hide the tapestryTapestry in background." (REUTERS/Peter Morgan)
http://story.news.yahoo.com/news?tmpl=story&u=/030205/170/37dfs.html
§Geurnica Anti-war Art Hidden behind U.N. Banner and Flags
by T. Reason (teereason [at] yahoo.com) Thursday Feb 6th, 2003 7:06 AM 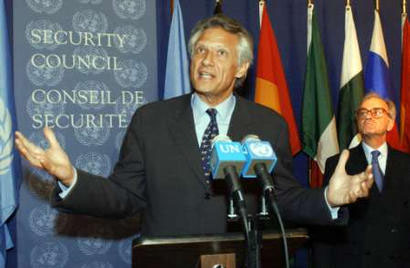 "French Foreign Minister Dominique de Villepin (L) speaks to reporters with Jean-Marc de la Sabliere (R), France's Ambassador to the United Nations (news - web sites), at his side at the United Nations in New York City February 5, 2003. The men are standing in front of a blue cloth and flags that were used to cover a tapestry of 'Guernica' the celebrated Picasso anti-war masterpiece. The tapestry hangs outside the U.N. Security Council, where U.S. Secretary of State Colin Powell (news - web sites) was presenting the U.S. case that Iraq is hiding weapons of mass destruction and war may be needed to make sure it disarms." (REUTERS/Brian Snyder)
http://story.news.yahoo.com/news?tmpl=story&u=/030205/170/37dfc.html
Add Your Comments
LATEST COMMENTS ABOUT THIS ARTICLE
Listed below are the latest comments about this post.
These comments are submitted anonymously by website visitors.