Add an Event
Newswire
Calendar
Features
Home
Donate
From the Open-Publishing Calendar
From the Open-Publishing Newswire
Indybay Feature
Publish to Newswire
Add an Event
Related Categories: Iraq
Palo Alto Peace March February 2
by Charles Slay (slaycslay [at] aol.com)
Monday Feb 3rd, 2003 4:39 AM
5,000 people marched and rallied in downtown Palo Alto protesting the imminent war with Iraq Saturday February 1st. It was the largest demonstration in memory in Palo Alto. It was a diverse group of people, mostly middle class, with many families. There were no arrests.

Top photo: The march went from City Hall Plaza around downtown for about six blocks.

Third row: Many families with children attended the event.

Bottom: It was an enthusiastic crowd.

The demonstration was organized by the Peninsula Peace and Justice Center.
Add Your Comments 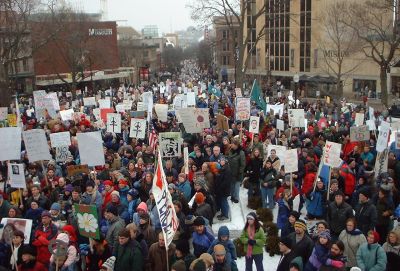 Here's a view of some of the 8,000 who marched on the same day through the cold of Madison, Wisconsin.
Add a Comment
§Good deal...
by Colorado
Wednesday Feb 5th, 2003 9:09 PM
Excellent, I'm glad to hear that great numbers of people are coming out for these events. It seems that once the 80's hit, protests for even the most important issues started to get low turnout. It's good to see the people hitting the streets again.

It gives all of us what we need:
1) A voice, if not in the media (since they often refuse to cover said events), then in the local spotlight.
2) Information, for those who don't know what's going on but because of the protest can't help but find out.
3) Inspiration, knowing that you are not alone in standing up against that which you find to be morally irresponsible.

This is the good stuff, this is a good beginning. Let us hope that this marks the beginning of increased political, social and moral interest and action in our country.
Add a Comment
Support Independent Media
We are 100% volunteer and depend on your participation to sustain our efforts!