MODESTO, CA: A lone media activist courageously confronted
throngs of corporate media encamped outside of Laci and
Scott Peterson's home Wednesday in Modesto California. The
Laci Peterson case has been one of the lead stories of the
corporate media since December 24th when she was reported
missing. While people go missing under suspicious
circumstances every day in the United States, this story
has captivated the public and is feeding the ravenous pack
of corporate media hyenas.

The brave activist known as "the last dj" was compelled to
reclaim the airwaves by interrupting live radio and
television broadcasts in front of the Peterson home. Radio
station KFI owned by Clear Channel and based out of Los
Angeles had been broadcasting live, verbally harrassing
the neighborhood and Mr. Peterson with a bullhorn on the
air.

The activist was engaged by two of the KFI talk show hosts
and questioned about the sign he carried and why he was
there protesting. The last dj expressed his dissapointment
in the way media exploits tragedy for profit and personal
gain. He confronted the show hosts about their company's
practices and expressed his outrage over consolidation of
the radio industry.

The large sign he carried featured lifesize head-shots of:
Eddie Frits, Chairman of the National Association of
Broadcasters; Lowry Mays, CEO of Clear Channel; Steve
Hicks who's Capstar Broadcasting merged with Clear
Channel, and who's brother is on the Board of Directors;
and finally Michael Powell, Chairman of the Federal
Communications Commission and son of General Colin Powell.
Bordering the pictures was "Enemies of Free Speech" in 12
inch tall letters. On the reverse side of the sign were
two blue bumperstickers with the slogans "I Don't Trust
the Corporate Media" and "Don't Trust the Corporate
Media" courtesy of Fairness and Accuracy In Reporting, a
media watchdog organization.

The interaction with the radio show allowed him to get
some airtime exposing a large audience to the truths about
media consolidation. As the live on air confrontation
began to escalate it was evident that the radio hosts were
reaching for response as they began to verbally assault
the activist live on the air. The hosts continued to stoop
to the level of personal attacks and derrogatory
name-calling.

The activist then turned his attention to a much larger
audience, as CNN was live on location doing the Larry King
Live show. Opportunity presented itself for a quick flash
of the sign before being confronted by a CNN staffer. The
activist was then threatened with bodily harm if he "got
in the shot again". This threat was made while on public
property in a community that the activist lives in and
serves.

Since the CNN segment was live for the East Coast, there
was a replay to monitor the happenings of the live
confrontation earlier that evening. The segment caught a
glimpse of the protest sign behind the local reporter. You
could hear the sounds of free speech escalate in the
background of the live audio feed. Mr. King asked the
reporter what was the noise going on in the background.
The reporter, Ted Rowland from KTVU Channel 2 out of San
Francisco, responded stating "it was a local Modestan
upset at the press for capitalizing on this tragedy". He
then commented incorrectly quipping sarcastically that
there were pictures of "Gary Condit and Scott Peterson on
the sign". You could then hear the activist shouting about
the "Telecommunications Act of 1996… and that this
wasn't news, that there is a war on"

The activist then departed the area unscathed and with a
strong message sent. He encourages others to seize the
opportunity to reclaim the airwaves and confront the
corporate media.
http://www.netfeed.com/~jhill/Media-Jack-K...
§photo of very large protest sign used
by partytown (partytownradio [at] yahoo.com) Thursday Jan 30th, 2003 10:01 AM 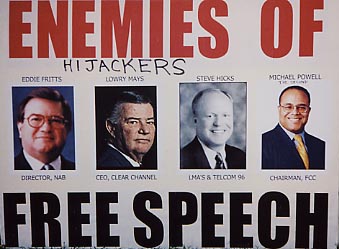 read more at http://www.partytown.com/cmp
http://www.netfeed.com/~jhill/Media-Jack-K...
Add Your Comments
LATEST COMMENTS ABOUT THIS ARTICLE
Listed below are the latest comments about this post.
These comments are submitted anonymously by website visitors.