Add an Event
Newswire
Calendar
Features
Home
Donate
From the Open-Publishing Calendar
From the Open-Publishing Newswire
Indybay Feature
Publish to Newswire
Add an Event
Related Categories: Iraq | Anti-War
P.K.K. Hopes For Boost From Iraq War
by turkishpress.com
Monday Jan 27th, 2003 7:07 PM
HURRIYET- Columnist Ferai Tinc comments on plans of the terrorist group PKK to take advantage of a possible war in Iraq. A summary of her column is as follows: 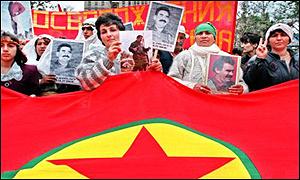 Following last week’s terrorist attack in Lice, in eastern Anatolia, which claimed one soldier’s life and injured five others, statements from the terrorist PKK made clear that the group is pursuing a new agenda of provocation. This attack took place in the first months of a government determined to take brave steps forward for democratization. Circles which stand to lose power in an environment of democracy are hoping to take advantage of the current crisis atmosphere surrounding Iraq. The PKK says that it considers the incident in Lice tantamount to a declaration of war -- in other words, it’s looking for an excuse. Speaking in December, Osman Ocalan, member of the so-called Presidential Council of KADEK, the successor to the terrorist organization PKK, said, ‘We give them until Feb. 15. We aren’t starting war yet, but if conditions don’t get better before that date, we’ll start planning for war.’ In spite of KADEK’s promise to Europe and the US to make itself a purely political organization, he was threatening that KADEK might start an armed insurrection.

In a weekend column, Milliyet’s Can Dundar published a document telling of contacts between the PKK and US officials. The document, which was found by Milliyet reporter Namik Durukan in northern Iraq and which seems to be an actual PKK report, reveals that US officials have held contacts with the PKK about the future of northern Iraq. ‘What pleases us is that our organization was not treated with suspicion,’ the report wrote. ‘This shows that our meetings will bear fruit.’ During their meetings, the PKK promised to solve the Kurdish problem as part of a ‘democratic solution’ carried out by protecting the country’s integrity. In addition, they requested that Washington serve as a mediator between on the one side Barzani and Talabani, the generally recognized Kurdish leaders in northern Iraq, and on the other the terrorist group. However, the US doesn’t have a record of keeping its promises. This time the PKK is leaning towards threat and blackmail to position itself better in Iraq’s future. It’s sending the message, ‘Don’t mess with the PKK.’

Following the attacks in Lice, the PKK abandoned its posture of supporting democracy and human rights. Speaking recently, terrorist head Osman Ocalan said that the group would fight not only in Turkey but also in the Middle East, using new tactics and harsh methods, and called on young people to ‘meet in the free mountains.’ The PKK’s top echelons are threatening Turkey with starting another separatist campaign in order to gain money from a war in Iraq. Terrorism and the threat of war… Is this development, which coincided with Turkey’s preparations for new democratic reforms, just a coincidence? Why is the tactic of blackmail gaining ground? Obviously the nation is not to blame...


SOURCE: OFFICE OF THE PRIME MINISTER, DIRECTORATE GENERAL OF PRESS AND INFORMATION

http://www.turkishpress.com/turkishpress/news.asp?ID=8634
Add Your Comments
LATEST COMMENTS ABOUT THIS ARTICLE
Listed below are the latest comments about this post.
These comments are submitted anonymously by website visitors.