Add an Event
Newswire
Calendar
Features
Home
Donate
From the Open-Publishing Calendar
From the Open-Publishing Newswire
Indybay Feature
Publish to Newswire
Add an Event
Related Categories: Anti-War
Demanding Preemptive Impeachment (firsthand report)
by Carol Brouillet (cbrouillet [at] igc.org)
Friday Jan 17th, 2003 11:37 PM
On Martin Luther King's Birthday, the one year anniversary of our march, demanding a Congressional Inquiry of 9-11, we marched again- but the message this time was for Preemptive Impeachment, Repeal the Patriot Act, Regime Change Begins at Home... 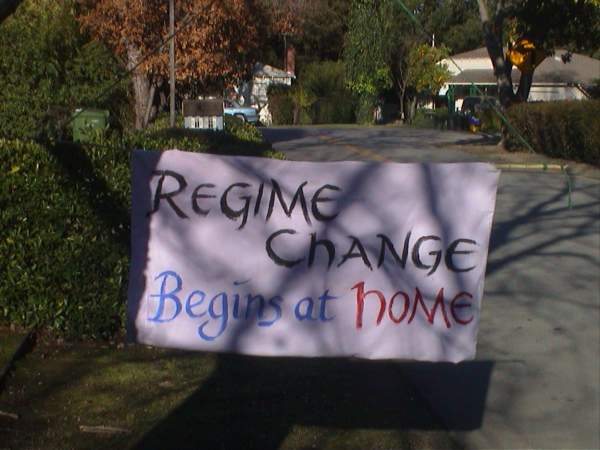 
A year ago we marched on Congresswoman Anna Eshoo’s office Demanding a Congressional Inquiry of 9-11, the questions we raised included:


Why were no fighter planes dispatched to intercept the four hijacked planes on September 11th , in violation of standard procedures?


What is the U.S. relationship with Pakistan, and especially with its intelligence service, the ISI?


Why did the then director of the ISI have $100,000 transferred to the man whom the FBI now calls the ringleader of the Sept. 11th attacks, and why does the U.S. not pursue this question? …”


Immediately after we raised these issues, Bush and Cheney asked Daschle to “limit the inquiries.” In order to not draw Congress’s attention away from the “War on Terrorism,” outside staff, notably Britt Snider, (friend of George Tenet, and ex-CIA Inspector General, began to oversee the inquiry). In June we learned that the heads of the Joint House Senate Intelligence Oversight Committee conducting the inquiry, Senator Bob Graham and Rep. Porter Goss, were actually breakfasting with the “money man” behind 9-11 on September 11th. A cover-up on an unprecedented scale, has shrouded and destroyed the evidence which could point to the true identities of those responsible for the attacks.


The resistance of the White House to an Independent Commission, and the subsequent appointment/resignation of Henry Kissinger, internationally renowned war criminal raised the red flag that the “Independent Commission’s ” mandate is to bury the truth and further the agenda of an increasingly criminal regime. Thomas Kean, the new chairman of the Commission, not unlike Bush, also has oil interests in the Caspian Sea region and financial links to Osama Bin Laden, and should be investigated (like Bush for his role in 9-11).


To stop the White House from committing further crimes, against humanity, against our Constitution, the Bill of Rights, against democracy, this year we demanded the impeachment of Bush and the Repeal of the Patriot Act.


(I must admit that I just returned from a family vacation in Canada and hastily organized the march to follow our usual weekly “Listening For a Change” event. I had no idea how many people would turn up. I’m unadept technologically and relied on fliers more than e-mail for outreach. I borrowed my husband’s camera, and accidentally left it on wiping out the battery, so the photos posted are the new banners that we carried, hanging from a tree in my yard. I don’t have any actual ones from the march, but at least a few television stations, and the local paper came and we got some coverage.)


About thirty people came, we enjoyed forming a circle, a spirit of camaraderie, shared purpose and hope. Everyone had a chance to speak, and then we grabbed banners, flyers, Deception Dollars (http://www.sigacanada.com/frontpage/politicalart/deceptiondollar/deceptiondollarwithsites.htm), and marched up and down University Avenue, in song, chanting, shouting, letting Palo Alto know of our opposition to Bush, the Patriot Act, and War.


We crowded into our Congresswoman’s office, along with television crews, to make our statements and have our voices heard. We also gave out copies of Kellia Ramares’s article- Preemptive impeachment Law professor stands ready to draft articles for any member of the House (http://www.onlinejournal.com/Special_Reports/Ramares010403/ramares010403.htm )and a number of people spoke very eloquently to encourage our Congresswoman to take a leadership role in stopping Bush from waging an illegal war, and dismantling the Constitution and the Bill of Rights.


I have been a frequent visitor to her office this past year and have passed on to her innumerable books, articles, magazines. This time I gave her a copy of Michel Chossudovsky’ excellent book, War and Globalization- The Truth Behind September 11th (http://globalresearch.ca/globaloutlook/truth911.html), and Eric Hufschmid’s revealing book which contains over 100 photographs, Painful Questions- An Analysis of the September 11th Attack, (http://members.aol.com/erichuf/PainfulQuestions.html) and the latest issue of Global Outlook (http://www.globalresearch.ca/globaloutlook/orderformI3.html), which, in addition to excellent articles, has a photo collage on the cover of the first “Bush Did It Rally/March that took place in San Francisco on September 7th 2002, and our banner that says-


which has been hung in downtown Palo Alto every week for over six months, and carried at the Bush, Cheney, Wolfowitz, War protests. Included in the packet were copies of key articles, including-

New Chairman of 9/11 Commission had business ties with Osama's Brother in Law, by Michel Chossudovsky (http://www.globalresearch.ca/articles/CHO212A.html)

And the Petitions-
Investigate and Impeach Bush for Failing to Act on 911 Warnings - And then Lying About It
(http://democrats.com/elandslide/petition.cfm?campaign=911)

Immediate and Total Repeal of the USA Patriot Act (http://www.shamon.com/cora/petition.htm)

I also wrote this letter:

A year ago when we marched on your office (and Senator Feinstein’s office to speak with Feinstein and Boxer’s staff on the issue of 9-11), I was deeply concerned by evidence of the Administration and the C.I.A.’s complicity in 9-11. Since then, I have become even more concerned because Bush and Cheney asked Daschle to limit the inquiry. In June I learned that the chair of the House and Senate Intelligence Oversight Committee were actually having breakfast with Pakistani ISI’s Lt. General Ahmad (the money man behind September 11th) who had $100,000 sent to Mohhamed Atta, identified by the F.B.I. as the lead pilot crashing the plane into the first tower of the World Trade Center. The resistance to the Independent Commission, the appointment of Henry Kissinger, and now Thomas Kean, who also has oil interests, and a financial link to Osama Bin Laden, hardly inspires confidence in the government’s efforts to illuminate the truth about what really happened on September 11th. Indeed the morass of lies coming out of the White House inspire deeper and deeper concern.

I get the impression that Congress (and much of the world) is terrified by the current administration. The bulldozing of the Patriot Act, the Anthrax attacks, the shadow government, the new legislation revamping the military and creating a new Gestapo seem designed to intimidate Congress, as well as the American people, who disagree with the Administration’s foreign or domestic policies.

Aung Sung Suu Kyi wrote: "It is not power that corrupts, but fear -- fear of losing power and fear of the scourge of those who wield it."


It is this fear paradigm which I hope to break- the fear of a global elite desperately trying to cling to power using the “old techniques of violence, terrorism, war.” That is why I have been “out in the streets, talking to people, demonstrating, asserting our rights to free speech, to question our government, to holding it accountable. The Patriot Act mirrors the Enabling Act which Hitler used after the Reichstag Fire to dismantle democracy and consolidate his power- there is no greater historical parallel to our own time. We must prevent the dismantling of our Constitution and our Bill of Rights, challenge the secrecy, lies, and crimes, of those misusing their power, and threatening all of humanity, organize resistance faster than the Administration organizes its new forms of repression. The American people are waking up; the vast majority do not want World War III nor civil war. Our great hope lies in our democracy, our constitution, the Bill of Rights, and in Congress to defend it against an Executive Branch that is behaving in a criminal manner. You are my representative; I want to encourage you to show courage, wisdom, and show leadership. Preemptive Impeachment is our greatest hope to steering our country and the world away from the disastrous path it is on. We will support you in this, and the rising peace movement across the country will, too. Cities everywhere are passing Resolutions to Repeal the Patriot Act and Resolutions against War. The tide will turn, and your help on this would make a profound difference. I urge you to be brave and accept the generous offer of Professor Francis Boyle (FBOYLE [at] LAW.UIUC.EDU) to draw up articles of impeachment. I believe the Patriot Act was passed before Congress had a chance to read it; and that should be unconstitutional, and grounds for its repeal.


Thank-you for your time, attention and help. I would like to meet with you to discuss this in greater detail.


[On Thursday night in San Francisco we held a support meeting for a Citizen’s Commission on 9-11, and I reported on our Palo Alto action and everyone (with one exception) thought it would be a good idea to meet with our other legislators and encourage them also to support Preemptive Impeachment and the repeal of the Patriot Act. Hopefully more lead time, would permit us to organize better and find many organizations to endorse our effort and participate in it. (Anyone wishing to endorse or help with another march/meeting with Senator Boxer’s staff- and possibly Senator Feinstein’s staff- please let me know!] 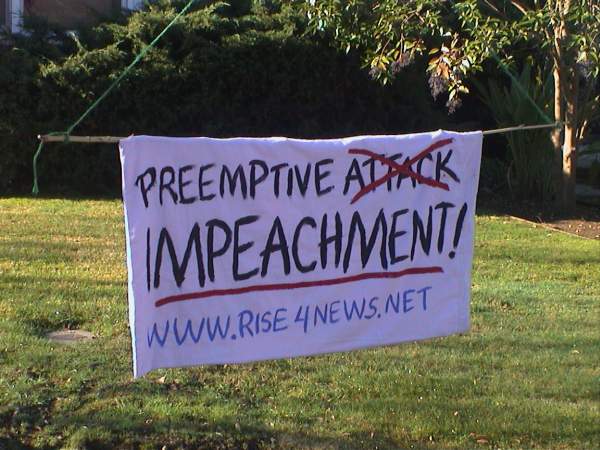 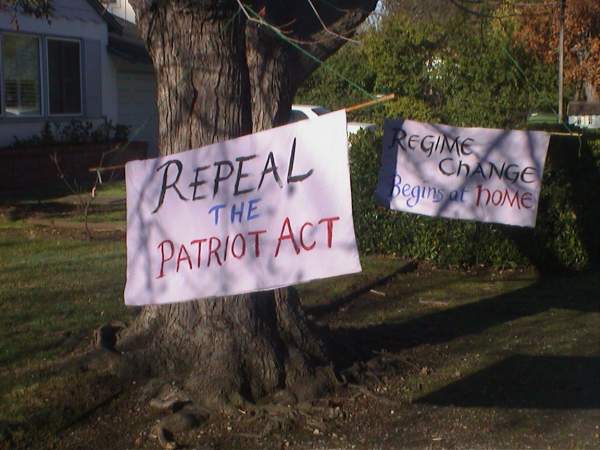 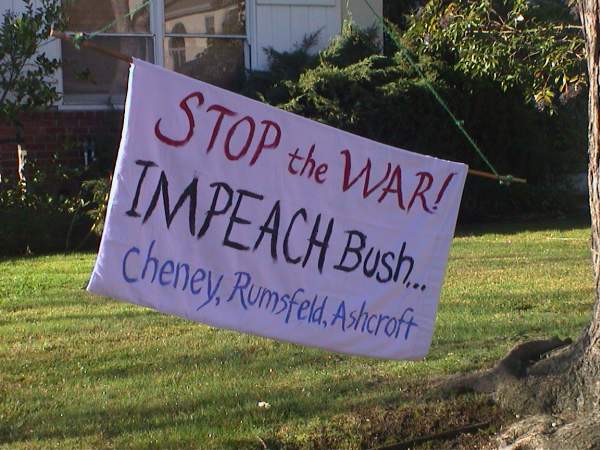 http://www.communitycurrency.org/9-11.html
Add Your Comments
Support Independent Media
We are 100% volunteer and depend on your participation to sustain our efforts!