Add an Event
Newswire
Calendar
Features
Home
Donate
From the Open-Publishing Calendar
From the Open-Publishing Newswire
Indybay Feature
Related Categories: Iraq
UN Warning of &quot;Devastating War&quot; In Iraq
by The Times of London
Monday Dec 23rd, 2002 5:29 AM
Confidential UN planning papers paint a grim picture of the effects of an attack against Iraq: they predict that production of oil will cease, the port of Umm Qasr on the Gulf would be shut down, and the bombing of bridges would cripple the railway network and make road travel difficult between the east and west of the country.

THE United Nations is making secret contingency plans for a war that would halt all Iraqi oil production, “seriously degrade” the country’s electricity system, provoke civil unrest and create 900,000 refugees, The Times has learnt.
Internal UN documents predict that the worst fighting will be in the three central governorates around Baghdad, with the Kurdish-controlled north remaining largely free of conflict. But it will take a month after war breaks out before the predominantly Shia south is calm enough for UN humanitarian workers to work there.

Although formally expressing the hope that war can be averted, UN relief agencies are already positioning emergency supplies and updating evacuation procedures for the hundreds of international staff now inside Iraq.

“The UN expects that there will be full compliance by Iraq . . . and that, consequently, there will be no new humanitarian crisis,” one document says. “Nevertheless, UN agencies must ensure that they are adequately prepared for the full range of possible scenarios.”

Kofi Annan, the UN Secretary-General, is trying to keep the preparations secret for fear of signalling to Iraq that weapons inspections are futile and a US-led attack is inevitable.

But he ordered staff to begin contingency planning last month after the Security Council set tough terms for resumed inspections in Iraq. His Canadian deputy, Louise Fréchette, is chairing regular meetings of officials to prepare for a possible humanitarian crisis.

Confidential UN planning papers paint a grim picture of the effects of an attack against Iraq: they predict that production of oil will cease, the port of Umm Qasr on the Gulf would be shut down, and the bombing of bridges would cripple the railway network and make road travel difficult between the east and west of the country.

The electricity grid would be seriously disrupted, with collateral damage to water and sewage systems. Government stocks of commodities such as grain would also be hit.

“It all seems perfectly reasonable, but when it actually happens, it will be different,” one person who reviewed the papers said. “It always is.”

At an unpublicised meeting in Geneva on December 13, the UN appealed to more than ten donor nations, including Britain, to provide $37 million (£23 million) to fund preparations for a crisis.

The Rome-based World Food Programme said that it had started to put in place sufficient food for 900,000 people for a month. The UN High Commissioner for Refugees has a stockpile of supplies for 250,000 people ready to move at 72 hours’ notice, but has only enough tents and blankets for 100,000 people. It could take 12 weeks and $60 million to deliver enough supplies.

The UN Children’s Fund, which has a warehouse in Denmark, has started moving supplies to Iraq and four neighbouring countries for 550,000 people inside Iraq and another 160,000 expected to spill into neighbouring states.

A major source of tension in the planning is the relationship between the emergency operation and the large UN “oil-for-food” programme that has been overseeing relief supplies inside Iraq for the past seven years.

The UN estimates that 16 million Iraqis, or 60 per cent of the population, are highly dependent on the monthly food basket provided under the programme. 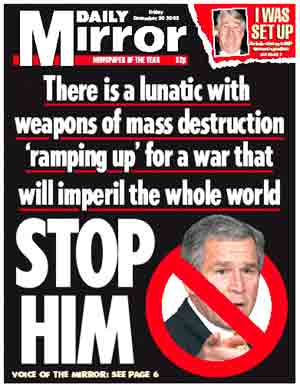 classic front pages of our times
(real)
http://www.mirror.co.uk/frontpages/
Add a Comment
§Neo-Malthusianism
by Don Johnston (don_cnh [at] hotmail.com)
Monday Dec 23rd, 2002 10:12 AM
Only God can intervene to stop the US Imperialists ...they dont respect me! So help us God...please for the sake of the millions whose lives are ruined by an malthusian economics system backed by the New World Orderers gunboat diplomacy in order to loot the resources of the peoples of the earth I pray that the wheelsreally fall off the wall st bankers and their flunkies the bush admin. And especially help us expose the complicity of those neo-liberals in Ottawa who are competing for the honou? of Uncle Sam`s chief bootlicker with Neo-liberal Labour of Britain. Rather please let the American people arise and take back their fine nation from the devourers.
Add a Comment
§Mrs
by Daphne O'Brien (obrien.daphne [at] briggsandstratton.com.au)
Monday Dec 30th, 2002 8:35 PM
I found this article interesting, but let's get real. This is exactly what happened in the Gulf War (Desert Storm).
An excellent book on the devastation caused by this war, and the ongoing embargoes, is "The Fire This Time", by former US Attorney General Ramsey Clark. Electricity, sewage disposal, water purification, hospitals, schools, mosques, roads, bridges, etc, and of course people, were totally devasted in that war - which was not a war, as wars create casualties on both sides, but rather a "turkey shoot" as some US pilots called it. So can't we just be honest and say this will be a repeat, except that it might not be so easy this time, and could well turn into WWIII.

Thanks for your excellent work. I am just rather emotionally involved with what has been done to the Iraqi people.

Please elaborate on your dire predictions..
Add a Comment
Support Independent Media
We are 100% volunteer and depend on your participation to sustain our efforts!