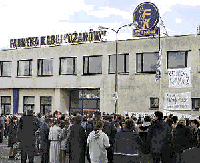 Years after the Solidarinosc labor movement helped bring down the authoritarian Communist regime in Poland, workers in Ozarow are now engaged in a struggle against the new capitalist ruling class in Poland. Beginning on November 26, pitched battles have occurred between workers and riot police over the issue of labor rights at a telephone cable factory. The factory has been the site of a protracted labor dispute over attempts to shut down the factory. The latest actions have led to arrests and beatings, and is entering a third week. On the first day, ten workers were arrested and four hospitalized. As the struggle has continued, there have been fifty arrests.


More information is available in a November 27 report (pl) from the Poland IMC, a series of three reports from A-INFOS [ 1 | 2 | 3 ], and a timeline of the dispute over the factory. [ Poland IMC | Poprostu | Protest Pracnownikow FKO Tele-Fonika Kable ]