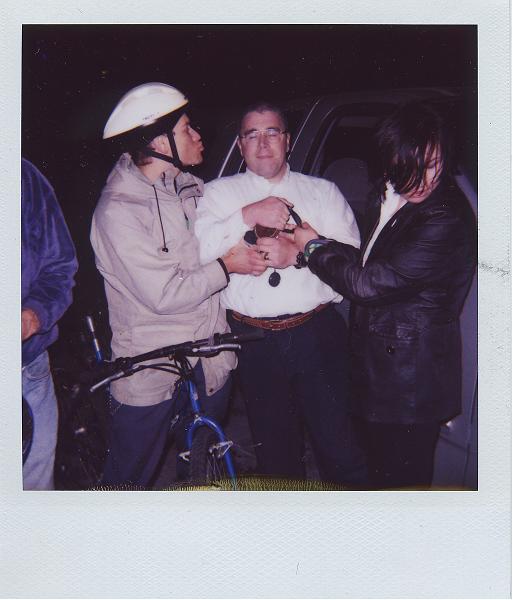 In a brazen disregard for the civil rights of 17 bicycle demonstrators, a
motorist attempted to physically arrest Sacramento Critical Mass bicycle demonstrators and confiscate one
videocamera as "evidence", injuring two people. The charge? "Impeding traffic", a traffic
infraction.

"He made a big mistake," said officer Larry Cromwell of the Sacramento
Police Department. "Yes he would be in his rights to physically detain
and arrest someone if they were committing a violent felony, but not for a
traffic infraction."

In fact, the demonstrators were acting in accordance with agreements with the Sacramento Police Department. While the demonstrators were indeed using all eastbound three lanes of one-way N street, their behavior was not only legal and true to the agreement with police, but protected by the United States Constitution and there were plenty of alternate routes available.

"We aren't blocking traffic, we are traffic!" stated one woman who rode with the group.

The incident began at approximately 7 PM on Friday, December 6, 2002.
The monthly Sacramento Critical Mass bicycle demonstration, which occurs
on the first Friday of each month, was proceeding eastbound on N Street in
downtown Sacramento. The demonstration turned left onto 28th Street when
Jason Meggs, video legal observer, pulled to the side of the road to
document a police vehicle with damage to the front left bumper.

The motorist, driving a large grey Ford pickup truck, swerved up beside
Meggs and in a commanding voice shouted, "Freeze! You're under arrest!"
He jumped out of the truck and rushed towards Meggs demanding that he "Put
the camera down!"

"I thought he was a police officer," said Meggs. "He had short hair, a
heavy-set build, held himself like a police officer and he was shouting
that I was under arrest. I was scared I would be arrested, and moreover I was scared that he would hurt me, but I did not
resist arrest. I did try to ask him questions as he rushed me, but he
gave me no time. He grabbed the camera and ripped it away from me while I
verbally protested and stated that he was suppressing evidence."

The man would not say if he was or was not a police officer, and would not
identify himself, but declared to the group, "You'll find out soon enough. You're all under arrest!
You're resisting arrest!" The motorist pulled out a pair of handcuffs
contained in a leather pouch and began striking people on the hands
as if it were a club or blackjack. Two of the demonstrators injured
received cuts and may have other injuries.

After a struggle for the camera which at times was very animated, with the
large, bulky motorist being very aggressive, a demonstrator
who was observing realized she had a polaroid camera and prepared to take
a picture. Instantly the melee froze and the motorist transformed from an
aggressor into a charicature by assuming an upright, smiling composure.
One of the demonstrators who had tried to retrieve the camcorder took the
opportunity to fake a kiss.

Once the photo had been taken, the struggle resumed.

After some minutes, police began to arrive. The motorist immediately
began demanding that the group be arrested. Meggs demanded that the man be
arrested.

The camera was taken into custody and locked in the trunk of a police car
by officer C.W. Lem, 558. Meggs attempted to have the camera returned,
saying "I need to document what is going on here, I have a right to the
return of my camera." He was refused.

There was reason to believe the motorist was attempting to obtain special
privileges from the police by asserting that he was within the culture of
the police and therefore should be given the overriding power in the
situation. At one point he approached one officer who was speaking with
Meggs and stated that "Your supervisor over there said that just this guy is going to be arrested."

In fact the supervisor later denied that statement, saying, "I didn't say
that, I just said it looked like no one was going to be arrested."

The remainder of the evening's events would take a long time to recount
accurately, and so are not yet available for posting.

In summary, the police repeatedly attempted to get both parties to abandon
proceeding with a citizen's arrest. Even given the statements of all the
witnesses and the motorist, the police refused to execute an arrest on
their own. One young woman, with an ebony sunburst of mascara fused to
her cheek from tears, stated that one of the officers had told her that
none of the demonstrators were filing charges. She was scared to file
charges alone, and was worried that the officer was speaking the truth.
He was not.

In all, up to 13 officers had responded to the scene. They wore various uniforms,
from the Sheriff's Department, the Sacramento Police Department, and Regional
Transit police. Officer M. Moore, 711, stated that everyone present had been
contracted as police through R.T., "Regional Transit".

"Gee you know if they just assign one car to help keep the peace and protect our
right to demonstrate for l ike an hour or two, they could avoid this whole mess and
save sending out over ten cops for over an hour!" said one demonstrator who was
pulling a mobile sound system on a bicycle trailer.

After considering the serious effect which these types of abuses have on
the ability to exercise the right to demonstrate in Critical Mass, and the
tremendous disruption which had occurred, as well as the damage to the
camera and the injuries, a number of the participants decided to proceed
with an arrest, initially for P.C. 242, battery.

242. A battery is any willful and unlawful use of force or violence
upon the person of another.

Police stated that after reviewing the statements and police repors, that
the District Attorney might add additional charges.

"This man falsely imprisoned the demonstrators. He used unprivileged
force, assaulting and battering individuals. I wonder if he technically
impersonated a police officer," said Meggs.

The California Penal Code includes sections such as:

538d. (a) Any person other than one who by law is given the authority
of a peace officer, who willfully wears, exhibits, or uses the authorized
uniform, insignia, emblem, device, label, certificate, card, or writing,
of a peace officer, with the intent of fraudulently impersonating a peace
officer, or of fraudulently inducing the belief that he or she is a peace
officer, is guilty of a misdemeanor.

"He would not say whether he was a police officer, he looked and acted as
one, and he wielded handcuffs against the group."

After Meggs had signed a statement of intent to arrest the motorist, his video camera was returned by officer T. Coole, 725, who stated he would retain the original s evidence. He stated, "This is evidence the court's gonna use against you on the traffic violations." Yet no citation was issued to Meggs or anyone else at the scene as of 7:50 PM, when this reporter had to leave to catch a train. The urgent effort to leave the scene and catch the last train to the San Francisco Bay Area was interrupted by Officer, Jestes 74, in a large group of officer. Jestes claimed to have watched the videotape and alleged that the group had violated the law, and asked what their point was.

Meggs offered to speak with him later about the reasons for participating in Critical Mass demonstrations.

"Considering the history of Sacramento Police Department excesses and
abuses at Critical Mass and other demonstrations, the police were
unusually fair and even handed in this instance, despite the behavior of some officers," said Meggs. "However, it
did not go unnoticed by the group that the absence of even a single police
vehicle escort has repeatedly meant violence against the group. In July,
motorists threw bottles, then punched a videographer in the face and
smashed his camera, and later crushed a demonstrator's bicycle when
confronted at a gas station."

"In May, a motorist jumped a median and ran over a cyclist's foot, then
struck his knee, and pushed another cyclist out of the way and off his
bicycle, which was crushed. Numerous police vehicles and even a
helicopter were throughout the area, and a Lieutenant was notified of the
incident immediately after it had occurred, yet no apparent effort was
made to chase the motorist, and the police promise to arrive at the scene
and take a report never materialized."

In contrast, during months that police have accompanied the ride with a small presence, these types of situations were avoided. "There was an understanding from the Sacramento Police Department that they would assign a small presence, which demonstrators by and large advocated for in order to find the balance between police abuses and motorist abuses, ideally resulting in no abuses," stated Meggs.

"Until October of 2001, a nearly 10-year history of Sacramento Police
Department abuses had accrued, culminating in 12 citations and an arrest
during the September 7 demonstration," said Meggs.

The BCLU has brought suit against the Sacramento Police Department, and is
taking ongoing actions against the motorists who attack the demonstration.

A recent post of video from one month earlier at the November ride, showing what a positive event the demonstration is when it isn't attacked:

Here is the story of the filing of the BCLU lawsuit against the Sacramento Police Department:

Here is the story, with a link to video, of the motorist attack in May:

Here is a story with images from the outrageous behavior of the Sacramento PD on September 7, 2001:

Or go directly to a lengthy account of that and some other events:

You may find this especially entertaining, in light of all the bad news above:

Finally, check out the world of Critical Mass:

http://www.bclu.org/sactocm/
Add Your Comments
LATEST COMMENTS ABOUT THIS ARTICLE
Listed below are the latest comments about this post.
These comments are submitted anonymously by website visitors.