by Jesse
The first Palestinian Trade Union Delegation to ever tour through America made it's second stop in Berkeley today. The first of five public stops in the Bay area before moving on. 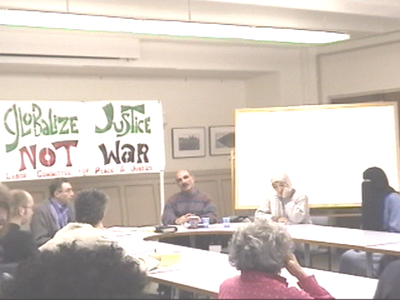 The first Palestinian Trade Union Delegation to ever tour through America made it's second stop on the tour today in Berkeley, CA. The delegation is making it's way from Portland throughout the country, ending back on the East coast before heading back to Palestine. Only two of the members of the delegation were able to make it out of the Occupied territories; leaving the third member, Abdel Khateeb, behind thanks to 'democratic' israel. Apparently his information was sent from the American consulate in Israel to Washington, and they just never heard back.

Mohammed Saleh and Hekmat Elsarraj were able to make the 22 hour long journey across the globe, starting the air flight from Amman Jordan. Mohammed had to try a couple times to get out of the territories due to closures related to the recent bombing in Jerusalem.

The room was packed with mostly union workers, and a few students in Berkeley to kick off the Bay area portion of the tour. They told their heartfelt stories of the working class struggle in the midst of an oppressive occupation. Mohammed spoke about the trade union movement, and told different stories, including how at one point in the Intifada he did not leave his office for three months straight. Another of his stories detailed how he had been imprisoned for no reason on seven separate occasions 'on suspicion', four of them being for more than 6 months at a time. The total time spent in Israeli prisons was more than 4 years. Hekmat spoke about the affects of the occupation on the children of Palestine, and the differences between how it affects boys vs. girls. Also she gave insight into how the role of women in the Intifada has changed since the first uprising.

A brief movie was shown, highlighting key points about the occupation and discussing the recent assault in Jenin. There also was a banner decorated with some slogans and artwork for people to sign which will be given to the delegation. At the end, the floor was opened for questions and they were all answered by the time it was over. It was a wonderful beginning to the bay area part of the tour.

THE TOUR ONLY HAS FOUR MORE BAY AREA STOPS!!!! DON'T MISS OUT! 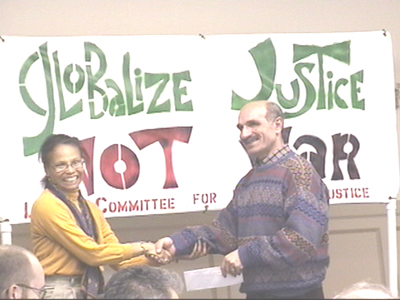 A delegation from CUE attended the event, and presented a check to Mohammed to help finance the tour. (Coalition of University Employees)
§Mohammed speaks his piece...
by Jesse 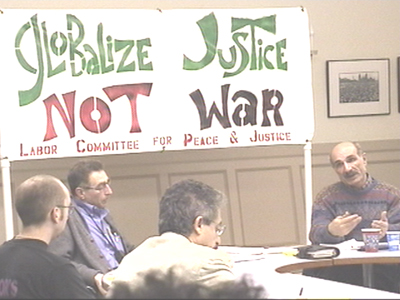 §Hekmat being interviewed by KPFA
by Jesse 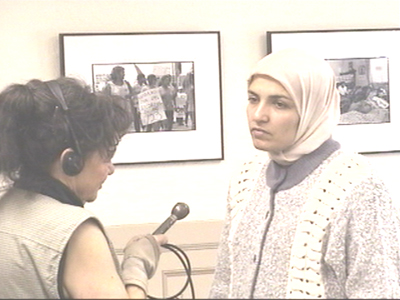 http://www.indybay.org/news/2002/11/1545339.php
END_OF_DOCUMENT_TOKEN_TO_BE_REPLACED
Add a Comment
Support Independent Media
We are 100% volunteer and depend on your participation to sustain our efforts!