Add an Event
Newswire
Calendar
Features
Home
Donate
From the Open-Publishing Calendar
From the Open-Publishing Newswire
Indybay Feature
Related Categories:
Student Protests In Iran
by repost
Wednesday Nov 13th, 2002 10:29 AM
The student protests in Iran have a real chance of making a difference and should be supported. Unfortunately, only support from the Left in the Middle East can have a real effect since any sign of Western support for the protests can be used to discredit them... 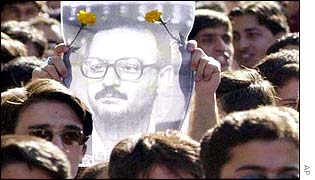 Thousands of students in Tehran have been holding demonstrations in support of a university lecturer condemned to death for criticising Islamic clergy.

Students made speeches and chanted slogans

The protests, against the sentencing of liberal academic Hashem Aghajari, were largely peaceful and confined to university campuses.

The action came the day after Iran's supreme leader issued a veiled warning that he might have to call on the "the forces of the people" if the country's governing structures did not solve major problems.

But the BBC's correspondent in Tehran, Jim Muir, says the statement from Ayatollah Ali Khamenei was not aimed at the student protests and there was no immediate threat of action against them.

Some conservative elements have also expressed unease over the sentencing of Mr Aghajari, with some hard-line student groups saying the punishment did not correspond to the accusations against him.

An editorial in the hard-line newspaper Kayhan voiced similar reservations, saying the ruling was a gift to reformists.

Political tensions have been rising in Iran, with reformers angry at the lack of progress in modernisation despite their election wins.

The sentence for Mr Aghajari has added to the frustrations and has also attracted international concern.

In his message, Ayatollah Khamenei criticised the government and parliament - which are run by the reformers - as well as the judiciary, which remains in the hands of hard-line conservatives.

Our correspondent says he may have been trying to encourage feuding politicians to set aside their differences by effectively banging their heads together.

http://news.bbc.co.uk/2/hi/middle_east/2448085.stm
Add Your Comments
Support Independent Media
We are 100% volunteer and depend on your participation to sustain our efforts!