Of all the Stupid things to do

by rcplank Rockford Il. (rcplank [at] ameritech.net)
Anyway, Rockford Illinois' finest raided these places and threw all of the residents out. These included elderly and ordinary people. This chart details the prisoner markings used in German concentration camps. Badges identify the following categories of prisoners: political, professional criminal, emigrant, Jehovah's Witness, homosexual, German shy of work, and others. The hierarchical ordering of prisoners sentenced to concentration camps created a Byzantine world of power relations. 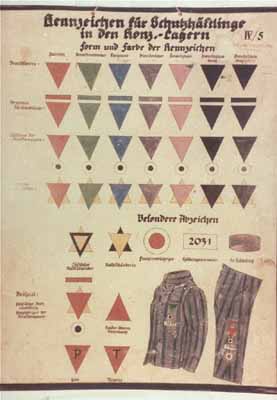 2 things that are here to stay, prostitution and drugs. One is the worlds oldest profession, the other an excuse to enslave the many and enrich the few.

Apparently those who don't have sex are telling men without partners it is wrong to seek comfort in the arms of a woman. What 2 people do is a private pact as long as neither is harmed.
A man dating a woman must spend many times more to get the "prize". It is the womans sole right to chose the time and place. Denying this is alien. A man is forbidden to pay for his choice of time and place??
Alcohol kills 200,000 people per year. Cocaine kills 3,600 people per year. Most of those are a result of it's being illegal. That is the real crime. Some $160 billion is wasted on the "war on drugs". 10 times as much as in pre-reagan times. The same percentage is stopped (10%) and the street price is 1/3 of what it was before.
Rockford seemed to have somehow stumbled onto a perfect solution to these "problems". Two residential motel/hotels
off the beaten path had placed dealers and chicks out of view. This kept the working girls off the street, and the dealers out of neighborhoods.
My Grandfather told me of Prohibition. 13 years and 10 months was enough to show legality was the lesser of 2 evils. More people drank when was illegal. That made the Mob rich, corrupted the justice system and politics and killed a lot of people.
When drugs came on the scene he was a police captain. His logic was pure. If the first guy is arrested, the cost of a trial and housing in a prison would be paid by taxpayers. Once he is gone , someone will replace him.
He studied the first guy intensively. By any standards the dealer was doing it right. He was left alone.
There were greedy slime balls (his words) who sold phony or toxic bunk to enrich themselves. These he had no mercy on. During prohabition any who adulterated booze with wood alcohol or other toxins "went to california".
Anyway, Rockford Illinois' finest raided these places and threw all of the residents out. These included elderly and ordinary people. Arrests were made and drugs were seized. One of the main "reasons" for this raid was the number of calls to police. Think about that please....
What else are police for? the fact they were called upon to do what they were paid for is now reason to evict an entire community?? It was shitty politics before election day, and that is all. Your check is in the mail, I won't cum in your mouth, and I'm a politician and I'm here to help you............right
If the persons not having sex or any other thrill stay in control of an obediant police force and continue to jail non-violent people for personal choices until they plead guilty, No jail is big enough.

A front page article told of a fact finding group touring Rockford's overcrowded jail. Rapists , child molesters, and murderers were cause for 4-6 men in a 2 man cell. Bullshit
If those were all that the jail held along with violent domestic and rampaging drunks no new jail would be needed.
Innocent until proven guilty is now hogwash.
3 weeks ago I spent a night in Rockford's jail. There were 4 guys in a 2 man cell plus me. 3 WERE DOING TIME FOR POSSESSION OF MARIJUANA. 30-60-and 90 days. I had missed a court date. It had been set month's before and I spaced it out. Had I known I could have gone to the clerk of courts and reset it.
The cost of my arrest far outweighed a postage stamp or phone call. The lesson I learned was Rockford's control has been taken over by sadistic neuters on Prozac. They want a tax increase. For that reason alone hundreds of thousands of our tax dollars are being wasted selling a fear plan and illogic bs to Rockford's overburdened taxpayers. If our society is 1/2 as violent as it was 20 years ago, why triple the jail capacity?

Dealers who push their product, deal to minors or poison for profit should "go to california". Whores who rob tricks should join them. Working girls with defined illness should be available to johns who share that affliction. Anyone dealing fairly should be left alone until the insanity ends.

http://www.veganoutreach.com/whyvegan/animals.html
Related Categories: Health, Housing & Public Services
Add Your Comments
Support Independent Media
We are 100% volunteer and depend on your participation to sustain our efforts!