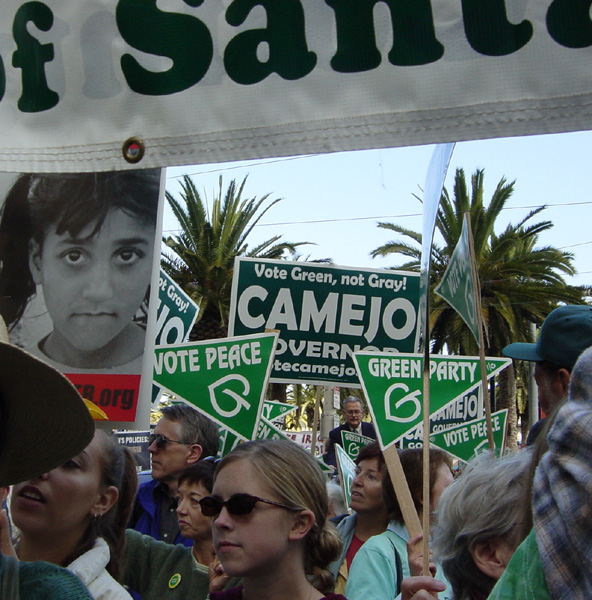 We started at the end of Market and were assembled into somewhat of a Green Block - we had the truck with Peter, we had the banners, we had the huge green flag (mistaken for a Hamas flag by some), we had accumulated all the greens who were wandering in the area . . . and as the march began, or maybe even before, without planning or thinking aobut it, the greens began to practice one of their Ten Key Values - decentralization.

Pretty soon we were spread in all directions, none of the major components together anymore, esp the truck which quickly dissapeared behind us and was not seen again. The flag was the one component I could see, so I stayed with it.

And then the favorite green herb of the green party found its way to the flag also, or else the flag made its way over there . . . . 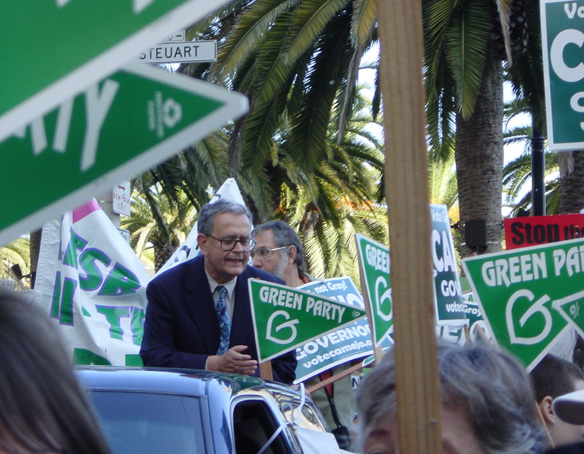 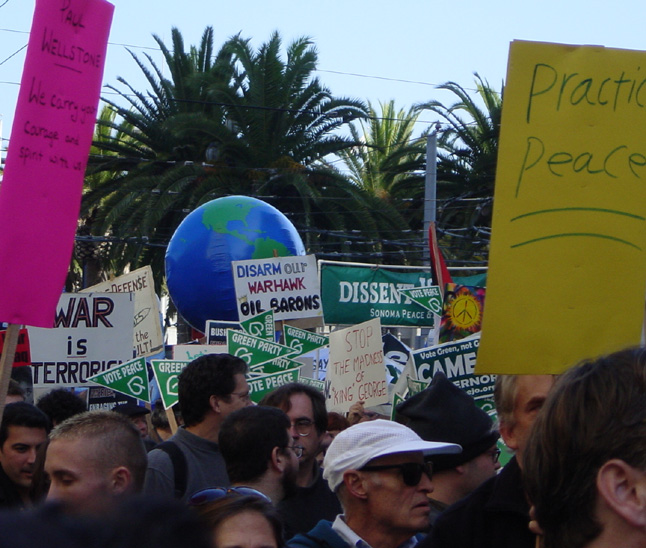 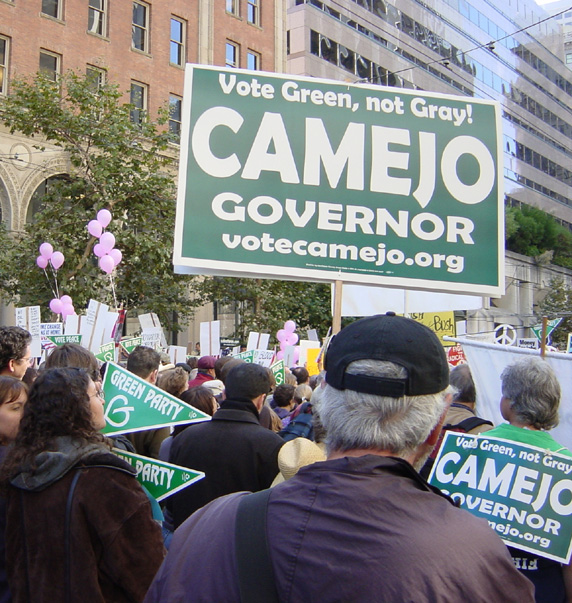 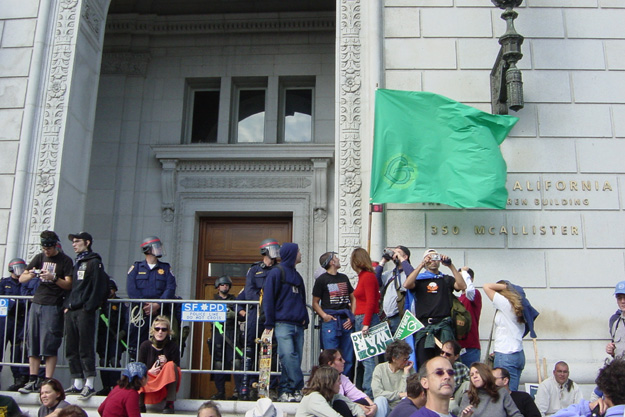 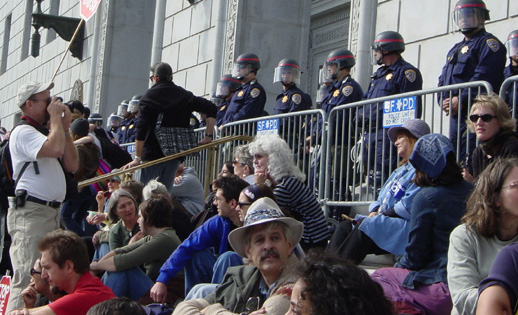 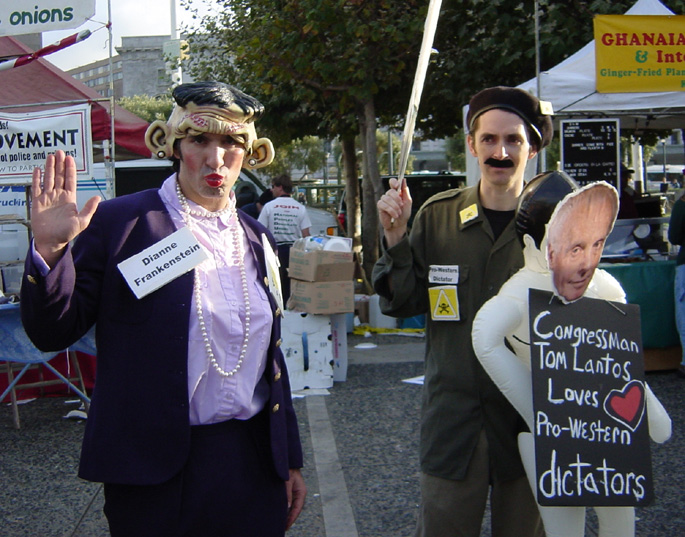 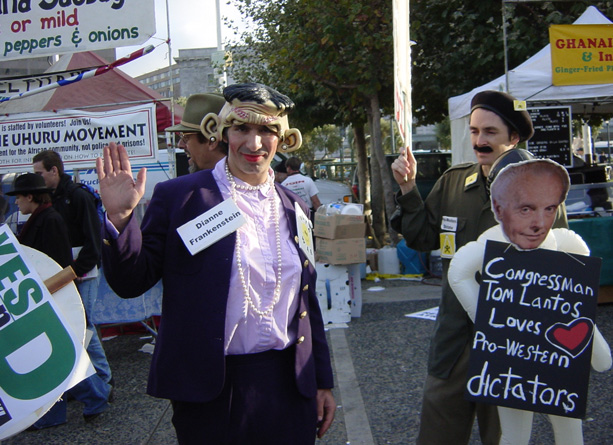 §next time ride a bike
by paige
Saturday Oct 26th, 2002 11:36 PM
I was sad to see peter camejo riding in a truck, the only one of the crowd of 80,000+ burning gasoline. I think the green party consistently puts forth the best candidates and I almost always agree with their positions, but I found the truck to be extremely inappropriate and worry that he may have lost the respect of some. Peter: there are several bicycles hanging in the office of the SF Green Party every time I have been there, next time asks some folks to tow you instead.
Add a Comment
§Yes!
by bov
Sunday Oct 27th, 2002 1:00 PM
Wouldn't that be hilarious? Peter could dress up in a king's outfit, like Willie wears, and Green Party people with the green aprons could ride bikes and tow him . . . .
The greens are still too fragile to make fun of themselves yet, publicly anyway, despite all the joking that goes on privately.

I agree. The greens should purchase (or create) some enviro-friendly vehicle for rallies and such, but as it is they can hardly afford to fix the computers.

Bikes are a good idea, but what about for hauling stuff? Maybe we'll think of something.

The Green Party. Geez, give it a break. Isn't that the weirdo liberal group that supports Ralph Nader?? A guy who never held a real job in his entire life. The anti-Capitalist who defines the term, "loser."

Geez, for god sakes, get a better gig.
Add a Comment
§You guys kick ass
by nicky
Sunday Sep 21st, 2003 6:19 PM
You guys kick ass. It so inspiring to see people moving forward!


............."always forward never straight"
Add a Comment
§ms
by lila allen (allenlila [at] aol.com)
Thursday Sep 25th, 2003 6:03 PM
I was very impressd with Peter's debate last evening and I only wish that more people would look past the gliter and hollywood thing and really listen to what was actually said.

I thought that Arnold actually repeated himself a lot, was very general and did not really have all of the facts.

I do not support our efforts in Iraq, nor do I believe that the expense is outwieghed by any benefit. What we are presently doing is not going to stop terrorism but may actually spur it further in retaliation of U.S. efforts.

I have some very strong beliefs that are not really mainstream although I am in a mainstreem profession. If Peter decides to run again for anything, I would gladly support him with my labors.

Lila Allen of Mission Viejo
Add a Comment
§The Truth Is A Breadth of Fresh Air
by Judy Leonard (spiritdelight [at] earthlink.net)
Monday Sep 29th, 2003 1:45 PM
I am so thrilled to finally have a leader who is truly a humanitarian. The last was Martin Luther King, Jr.
I am encouraging everyone I know to vote Green. Peter Camejo is telling the Truth and you deserve as much support as we can possibly muster. Bill Maher should have you as a guest on his friday night HBO forum. I will send an Email to the show...all you truth-seekers should do the same. Thank you Peter Camejo for all of your good work. God Bless You.