Add an Event
Newswire
Calendar
Features
Home
Donate
From the Open-Publishing Calendar
From the Open-Publishing Newswire
Indybay Feature
Related Categories: Health, Housing & Public Services
Gavin Newsom: The Hypocracy Never Ends
by burn marina burn
Sunday Oct 20th, 2002 10:26 AM
So Newsom is complaining about poor people drinking AND selling wine. Have any protests been held in front of Newsom's stores yet? This guy seems like pure evil if I've even seen it. 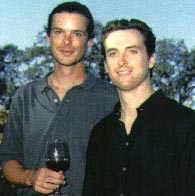 When Gavin Newsom and Billy Getty used to go into a wine shop, like other young guys, they were often directed to the light beer section faster than they could say "Merlot." Maybe it was the baseball caps and sneakers. Whatever it was, it felt like a snub.

It didn't matter that both young men come from very prominent California families. Newsom's dad is the well-respected Judge Bill Newsom, and Getty's dad is the composer and philanthropist Gordon Getty. The younger Newsom serves as a member of the San Francisco Board of Supervisors.

In 1992, Newsom and Getty, both in their early 20s, decided that they had had enough of the "ageism" and opened their own wine shop on Filmore Street in San Francisco.

Newsom says, "The primary reason (we started PlumpJack was that) we were sick and tired of the snobbery surrounding the business."

Getty concurs. He tells me, "Every new 21 year old is greeted with open arms by trillion dollar advertising campaigns for the apathetic consumption of hard alcohol or drinking light beer with the Swedish bikini team. And yet the one form of alcohol consumption that has proven medical attributes is shrouded in this nonsensical snobbery."

The Company We Keep

And they've stayed true to their focus.

Newsom tells me, "The whole strategy of PlumpJack is inexpensive value wines."

The bottom line is that PlumpJack is introducing great tasting and affordable wine to a whole new generation. They've taken the mystery out of wine and put the enjoyment in.

And the business is thriving. The guys tell me that it takes 500 employees to run the company, a number that is likely to double next year.

From A To Zinfandel
So what do these guys say is a surefire party pleaser this year?

"One of the big booms we're seeing now is Zinfandel. People realizing that it's a great alternative to Cabernet and Merlot," Newsom says. "And there are so many different styles of Zin. You can have Zinfandels that taste like Merlot that are racy and jammy, bright rich fruit. And you have Zins that are more in line with Cabernet where you get more a spice and licorice."

And what about the ever tricky champagne?

The guys recommend Dampierre Brut. Newsom tells me that this champange is "stunning. Every time we serve people (at one of their five restaurants) they say what the heck is this? It's got a lot of fruit but a baked bread yeastiness, which is just awesome, especially on the finish."