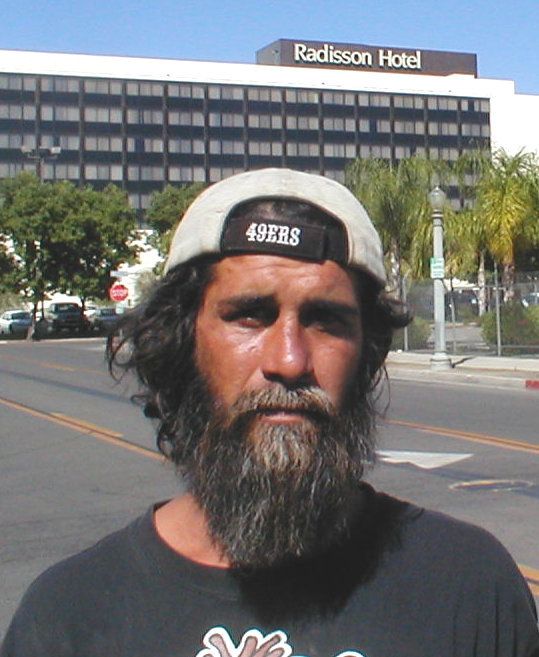 The campaign went into high gear last month when the Mayor and Chief of Police promoted and the City Council introduced an ordinance prohibiting the poor and homeless from asking for money. The ordinance is not intended to stop middle class groups from asking the public for money, standing in the middle of street medians, or yelling at passing cars. It will just affect the poor.

The harrassment in downtown Fresno has gotten so bad that the homeless are being threatened with death if they don’t move on. Dave Ritter, who is homeless and living downtown, has had several encounters with the police and rent a cops. He told me that he was dumpster diving at the Radisson at about midnight when several security guards told him to leave. He told the guards that he would like to take the food he found and they said no. As he was leaving, Dave cursed at them. The security guards chased and pepper sprayed him. Dave ran to the other side of the street where they caught and hand cuffed him. Dave says that one of the guards went to the end of the street as a lookout while the other one beat him. Dave told me that the guard told him that if he ever caught him there again he would take him out to his farm in Mendota, tie him with a rope to his truck, and drive him all over his property. The security guards then called the Fresno Police and had Dave arrested. Dave says that the FPD wanted a picture of Dave on Radisson property. Dave refused to walk over to the Radisson so he was dragged onto the property where pictures were taken.

Is this an isolated case? I don’t think so. If you talk to the homeless around downtown Fresno you will hear a consistent story of abuse, harrassment, and disrespect. Not only from security guards like in the story above, but by the Fresno City Police themselves. I witnessed an incident in which a police officer badgered and taunted Mr. Ritter. Bicycle Officer Mike Smith was circling Dave on his bicycle. The officer was saying (numerous times) "Get a job Dave!" Mr. Ritter tried to ignore him and attempted to explain to the officer that he "is not causing any problems." The Officer became more aggressive calling Mr. Ritter a "worthless piece of shit" and "good for nothing."

I was standing less than 10 feet away from the officer and Ritter. Mr. Ritter appeared to be trying to get away but he could not evade the officer on a bike. The officer called him a "human cockroach", got off of his bike and got right into Mr. Ritter’s face. It appeared the officer was trying to provoke Mr. Ritter.
I reported this incident to the Fresno Police Internal Affairs department using their procedure for making a citizens complaint three months ago. The Police Department did not acknowledge receipt of this complaint and to this day has not responded to the complaint. When I called Sargent Marty True in Internal Affairs about a month after the complaint was filed he admitted that they had the complaint and were investigating. I have not been contacted since and as far as I know the culture and procedures within the FPD that led to that incident have not changed.

So what is this all about? Why are the police and City of Fresno now criminalizing and attacking the poor and homeless, particularly in downtown Fresno? To get the answer, you need to follow the money.

Who will benefit if the poor and homeless are threatened, harassed, and made to leave downtown Fresno? The people who stand to make money in this sordid affair are those engaged in the revitalization project in downtown Fresno. They are the owners of the buildings who are looking to double or triple their money in the speculative market. These are also the folks who make generous contributions to local politicians! If this plan succeeds many local small businesses will be displaced. These businesses will be replaced by Starbucks, The Gap, and other trendy shops setting up a “theme park” environment in the downtown core. Homeless people, the poor, and many small businesses will be forced out of the area and will not participate in the advantages of the revitalization in downtown Fresno. All of the citizens of Fresno will pay for this development, the police will enforce the draconian laws against the poor and homeless to make the plot work for the wealthy investors, and all of the citizens of Fresno will lose a little of their soul and compassion if we allow this to happen.

Will we allow the rich and powerful to trample on the rights of the poor so a few investors and multinational corporations can make millions? Stay tuned... Better yet, join one of the groups who are fighting for dignity and respect/social and economic justice. You will find the names of groups working in the Fresno area for Peace and Social Justice at: http://www.fresnoalliance.com/home/community.htm
END_OF_DOCUMENT_TOKEN_TO_BE_REPLACED
Add Your Comments
Latest Comments
Listed below are the latest comments about this post.
These comments are submitted anonymously by website visitors.
TITLE
AUTHOR
DATE
Prosecute the homeless it becomes worse
goprnazis
Not exactly...
Fresnan
Think...
Da
Heh heh
Father Luke
mr.
ron tuason
Capitalist Pig
Thess
private space for the public, oh yes,o my
a3m
?
?
north of the 49th parallel
cyclone
laws do restrict corporate panhandling to individuals
homedthankfully
Support Independent Media
We are 100% volunteer and depend on your participation to sustain our efforts!