by QUIT! (quitpalestine [at] yahoo.com)
About 25 queer settlers descended on a downtown Berkeley Starbucks on Saturday, August 17, claiming Berkeley as “a city without people for people without a city.” The street theatre called attention to Israeli colonies in Palestine. 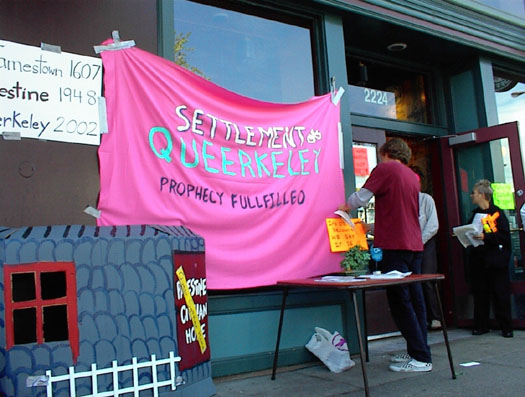 About 25 queer settlers descended on a downtown Berkeley Starbucks on Saturday, August 17, claiming Berkeley as “a city without people for people without a city.” The group, organized by Queers Undermining Israeli Terrorism (QUIT!), posted a banner proclaiming the reclaimed café “Queerkeley – A Prophecy Fulfilled.”

They also erected homes (transformed “Palestinian civilian homes reclaimed from another street theatre action), lawn furniture, and signs reading, “It Works In Palestine, Why Not Here?” and “It’s Ours Because We Say So.” They erected plastic palm trees to “make the concrete bloom,” and gave patrons a tract explaining their religious claim to the land as follows:

“Land of fruits and nuts …

“And the Lord saw that the queer people were harried in this land. And the Lord spake onto the prophet Harvey, “You will lead your people across the wide waters unto a new land.” Harvey was fearful, and he cried to the Lord, “How will we cross the wide waters? For they are cold, and they are filled with all manner of hazardous substances and raw sewage and other pollutants.” And the Lord responded, “fear not, Harvey, for a great bridge will be built, and the people will cross into this land. And this land will be called Berkeley. I say, Lo, I have promised the land of Berkeley to the lesbians and to the gays, and to the bisexuals, and to the transgenders and to the intersexed, and to all of the gender variant peoples. And this land shall be blessed with fruits and nuts, unto 50 genderations.”
—Book of Reclamations and Realty, 4.0

The group selected Starbucks for the location of their first settlement in Berkeley because Starbucks founder and CEO, Howard Shultz, is a major supporter of the Israeli state and the corporation has become the prime target of an international boycott of corporations with ties to Israel (http://www.inminds.co.uk/boycott-israel.html). “Since Mr. Shultz clearly believes it is okay for one group of people to grab land belonging to another and say they have a right to it, we figure he won’t mind if we take some of his,” a QUIT leaflet explains.

Workers in the café were surprisingly unruffled as the Queer Defense Forces entered the café and announced over a loudspeaker that the land had been confiscated by the Queer National Fund and curfew for straights would begin in five minutes.

Several “patrons” were forcibly ejected from the café by means of SuperSoakers (which were especially popular with a three-year-old settler).
Many coffee drinkers quickly cleared out, but one group of chess players steadfastly ignored the group, who vow to set up more settlements in the coming months. 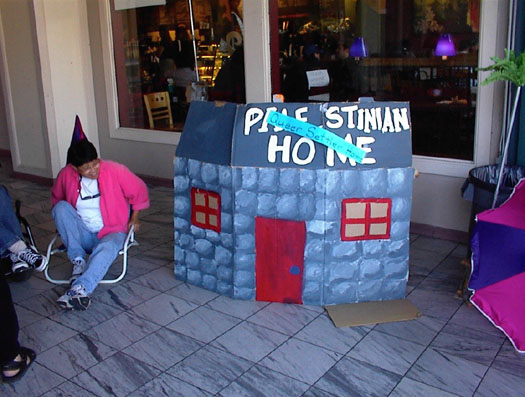 END_OF_DOCUMENT_TOKEN_TO_BE_REPLACED
§Making the Concrete Bloom
by QUIT! (quitpalestine [at] yahoo.com) 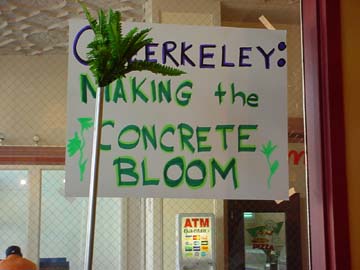 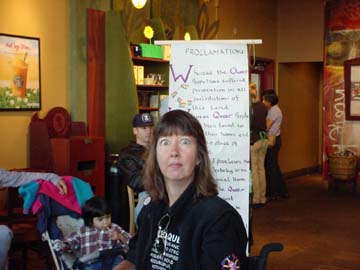 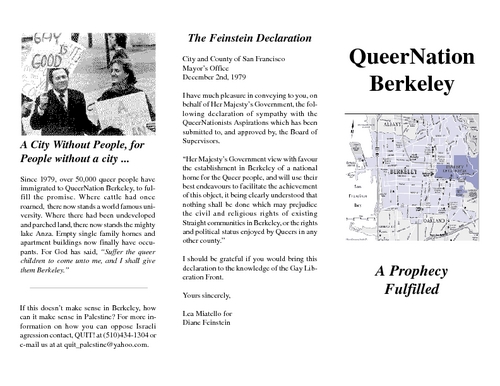 Download PDF (119.5KB)
Add Your Comments
Latest Comments
Listed below are the latest comments about this post.
These comments are submitted anonymously by website visitors.
TITLE
AUTHOR
DATE
antisemite=antijew, okay?
Anti-anti-semite
Another variable
Critical Thinker
Jewish Only?
Jesus Goldberg
Re:
Goran Vij
hmmm
scottie
Who Are the Terrorists?
James F. Harrington
Gay Palestinians Attempt to Blow Away Stereotypes, Jews
Shariah for Queers
QUEER PRIDE FOR THE WEST COAST!!!!!! much luv from the 206!
maria---> tranny seattlite for 17 years!
I'm suprised of this
Queer Antifascist, Berlin
Mr
Randy of the Redwoods
Support Independent Media
We are 100% volunteer and depend on your participation to sustain our efforts!