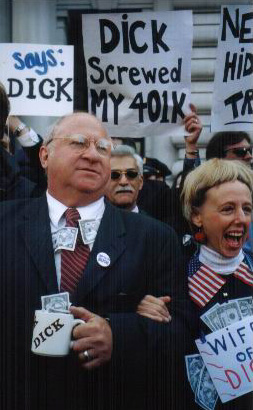 Despite the early hour, an estimated 300 protesters turned out early Wednesday morning, August 7, to welcome Vice President Dick Cheney to San Francisco. Cheney was in town to address the Commonwealth Club.

Protesters--mobilized by Global Exchange, the International Action Center, and several other groups--gathered before 8:00am in front of the Fairmont Hotel in San Francisco's ritzy Nob Hill district.

The demonstrators protested Cheney's involvement with Halliburton oil company, the Bush administration's connections to corporate crime, the U.S. war in Afghanistan, and plans for new attacks on Iraq.

San Francisco's own "Dick Cheney" (Ed Holmes of the San Francisco Mime Troupe) was among the activists, accompanied by his wife "Lynne" (Medea Benajmin), "George W" (Amos Glick), and a host of reporters, fawning businessmen, security gaurds, a personal medic, and assorted hangers-on.

San Francisco police used barricades and horses to control the crowd. A small groups of about 10 pro-Cheney demonstrators were on hand, and at times arguments between the pro- and anti-Cheney factions grew heated, but there were no physical altercations.

In addition to the outside demonstrators, five activists attended Cheney's speech inside the Fairmont. According to Kristi Laughlin of Global Exchange, one of those inside, the protesters stripped off their corporate drag to reveal T-shirts reading "Cheney is a Corporate Crook" and "No War in Iraq." The chanting protesters were removed by security and detained, but were not charged by SF police. 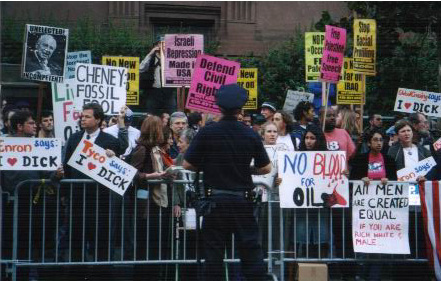 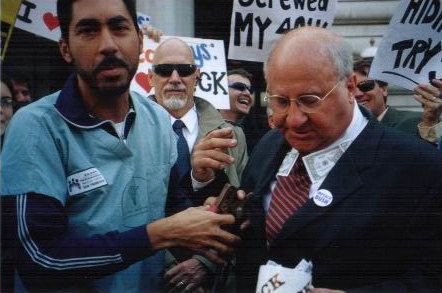