Add an Event
Newswire
Calendar
Features
Home
Donate
From the Open-Publishing Calendar
From the Open-Publishing Newswire
Indybay Feature
Related Categories:
Chemtrails Confirmed
by Will Thomas (willthomas [at] telus.net)
Tuesday Jun 18th, 2002 6:20 AM
As a resurgence of unusual aerial trails crisscross Canadian skies, official confirmation of chemtrails has come from the U.S. Congress. 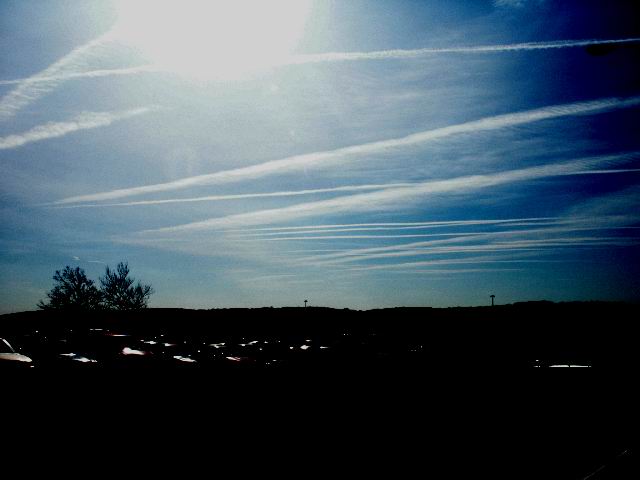 “Chemtrails” is the term widely used to describe the brilliant white plumes laid down by U.S. Air Force tanker planes photo-identified over North America and a dozen other allied nations. Unlike normal condensation trails – which form when hot engine exhaust momentarily condenses in the frigid stratosphere like exhaled breath on a cold day - chemical trails linger for hours, turning clear skies into milky haze in a process the U.S. Air Force calls “aerial obscuration”

“Chemtrails” also appear in House Resolution 2977. Introduced last October by Ohio Rep. Dennis Kucinich, this bill called for the peaceful uses of space, and a ban on “exotic weapons”. Section 7 of the “Space Preservation Act of 2001” sought specifically to prohibit “chemtrails”.

Kucinich recently told the Columbus Alive newspaper (Jan. 24, 2002) that despite official denials, as head of the Armed Services oversight committee he is well acquainted with chemtrail projects. “The truth is there’s an entire program in the Department of Defense, ‘Vision for 2020,’ that’s developing these weapons,” Kucinich told reporter Bob Fitrakis. The U.S. Space Command’s 2020 vision calls for “dominance” of space, land, sea and air.

The unusual white plumes reported by Air Canada pilots, police officers and former military personnel over Canada and the U.S. during the past three years are often contrasted by brief, pencil-thin contrails left by commercial jets flying above them.

Contrails form when water vapor clumps around dirt particles acting as nuclei. According to NASA and the National Oceanic and Atmospheric Administration, contrails can only form at temperatures below minus 76 degrees, and humidity levels of 70 percent or more. Even in ideal conditions, contrails rarely last more than 20 minutes.

But atmospheric studies by NASA and NOAA - including TARFOX, ACE-Asia, ACE-I and II, INDOEX and Project SUCCESS - confirm that artificial clouds and contrails can be manufactured under conditions of low humidity by dispensing particles from aircraft. The smaller the size of the nuclei introduced into the atmosphere, the greater the rate of artificial cloud formation.

Canadians were the first to complain about chemtrails to their federal government. On Nov. 18, 1999, NDP Defense critic Gordon Earl petitioned Parliament on behalf of 550 residents of Espanola, Ontario to “repeal any law that would permit the dispersal of military chaff or of any cloud-seeding substance whatsoever by domestic or foreign military aircraft without the informed consent of the citizens of Canada thus affected.”

According to CBC Newsworld (Aug 29, 1999), “Many in the community have reported respiratory problems and strange aches and pains. Town council heard that some believe military jets are dropping material over the town as part of a weather experiment” - after laboratory tests confirmed the presence of aluminum in rainwater falling through chemtrails over Espanola five-times higher than provincial health safety limits.

The Ministry of Defense eventually replied, “It’s not us.”

The “airliner” argument collapsed along with the Twin Towers, when heavy chemtrails were reported over Vancouver Island and widely separated U.S. cities despite the grounding of all commercial flights last Sept. 11, 12 and 13.

Photographs of heavy aerial gridding over Santa Fe, New Mexico and B.C.’s Sunshine Coast also contradict official weather data showing high altitude humidity at the same times and locations to be less than one third the moisture needed for contrails to form.

In Houston, Texas, Mark Steadham conducted a 62 day survey of jet traffic over that busy hub. Using a computer program called Flight Explorer, Steadham identified commercial and military aircraft sharing the same sky. The contrails from commercial jets dissipated within 22 seconds. The plumes left behind at the same time by big military jets persisted for four to eight hours.

The first break in an investigation begun by the Environment News Service in Jan. 1999, came 11 months later when Victoria airport authority Terry Stewart returned a call to a Victoria resident concerned about the X’s and grid patterns being laid over the B.C. capitol. “It’s a military exercise, a U.S. and Canada air force exercise that’s going on,” Stewart reported on Dec. 8, 2000. “They wouldn’t give me any specifics on it.”

The “specifics” came in March the following year, when Maine radio reporter S. T. Brendt called a senior Air Traffic Control manager after she, her news director and staff counted 370 plumes filling skies normally devoid of commercial aircraft. During his hitch in U.S. Navy Intelligence, Brendt’s husband had never seen an aerial armada this big. “It looked like an invasion,” Lou Aubuchont said.

The FAA manager told Brendt he had been ordered to redirect incoming commercial flights around “military exercises” on several occasions that month. In follow-up interviews at the WMWV studios, the government official confirmed widespread chemtrail activity. As they flew north into Canada, he said, the planes were spraying a substance that showed up as a “haze” on Air Traffic Control radar screens.

Computer simulations at Lawrence Livermore National Laboratory showed that spraying 10 million tons of aluminum oxide into the upper atmosphere would reflect between one and two percent of incoming sunlight. The predictions promised no net warming over 85 percent of the earth surface, despite a predicted doubling of CO2 within the next 50 years.

The biggest lobby pushing for a reduction in global warming are insurance companies bigger than Big Oil and the international trade in arms. Multinationals such as the Swiss Reinsurance Company and Lloyd’s of London report unsustainable losses incurred by Extreme Weather Events caused by a rapidly warming planet. It is feared that if they go bankrupt, so will the money markets and banks that back them.

Andrew Dlugolecki - director of one of the world’s six biggest insurance groups, CGNU - warned the Hague two years ago that unless action is taken to curb global warming, the resulting damage will exceed the dollar value of all the world’s resources by 2065. “Already we’re beginning to run out of money in the insurance industry,” Dlugolecki declared.

It was Edward Teller, father of the H-bomb, who called for spraying a chemical “sunscreen” at a 1998 International Seminar on Planetary Emergencies. Besides disturbing regional weather patterns, Teller’s chief climate modeler, Ken Caldeira worries about negative health effects. The atmospheric scientist who crunched the numbers on Teller’s “sky shield” further warns such a project could, “destroy the ozone layer”. Caldeira believes the U.S. government will publicly admit to chemtrails this spring.

Scientists say aluminum oxide as inert as sand poses no toxic threat. But after examining more than 3,000 health studies published since 1997, the U.S. Environmental Protection Agency confirmed a strong link between tiny particulates and thousands of premature deaths each year.

According to a New York Times feature, “Tiny Bits of Soot Tied to Illnesses” (April 21, 2001), numerous health studies show that “microscopic motes - composed of metals, carbon and other ingredients - are able to infiltrate the tiniest compartments in the lungs and pass readily into the bloodstream and have been most strongly tied to illness and early death, particularly in people who are already susceptible to respiratory problems.”

In a report headlined, “Tiny particles can kill” New Scientist (Aug. 5, 2000) reported a Harvard “Six Cities” study, which “identified particles with a diameter of less than 10 microns as threat to public health.”

A scientist working at Wright-Patterson Air Force Base told Columbus Alive (Dec. 6, 2001) that two different chemtrails projects are currently being conducted by the U.S. military. One involves creating clouds to cool global warming.

Chemtrails are also being deployed by the Pentagon to suspend a mixture of barium stearate and fine iron particles as a temporary atmospheric antenna for conducting radio and radar waves over the horizon. The soapy stearate used to carry the airborne iron particles appears in the sky as prismatic bands of color.

Barium-iron chemtrails were reportedly used to create long range radio-and-radar “ducting” during sustained air strikes on Iraq, Kosovo, and Afghanistan. The scientist interviewed by Fitzrakis also stated that barium chemtrails are being used in conjunction with an “atmospheric heater” called HAARP in Gakon, Alaska.

HAARP’s inventor Bernard Eastland told this reporter that the principal purpose of this multi-million watt weapon is to “steer the jet stream” and change the weather. His patent calls for spraying barium in the atmosphere to enhance the effects of HAARP. “Wright-Pat has long been deeply engaged in HAARP’s electromagnetic warfare program,” Eastlund told Columbus Alive.

If some of the chemtrails being sprayed overhead contain compounds for conducting electromagnetic energy, residents of all affected communities could be in even graver danger from the intense electromagnetic radiation emitted by cellphone and microwave transmitter towers, radar installations at military bases, high-voltage power lines, high-power military relay towers and myriad other well-documented sources of "electronic smog" - 15 million times more intense than natural background levels.

Canadian military officers at Canadian Forces Base Comox spokesmen have heatedly denied the existence of this joint military operation. But Terry Stewart told the Vancouver Courier (Aug. 15, 2001) that his information confirming the Canada-U.S. military exercise came directly from CFB Comox.


Veteran reporter William Thomas has covered stories suppressed by the mainstream media for more than 30 years. He is the award-winning author of Scorched Earth, Bringing The War Home, Probing The Chemtrails Conundrum, Alt. Health, All Fall Down: The Politics of Terror and Mass Persuasion. His video documentaries include “Eco War”, “Waterwise” and “Chemtrails: Mystery Lines In The Sky”.

http://www3.bc.sympatico.ca/Willthomas/Che...
Add Your Comments
Support Independent Media
We are 100% volunteer and depend on your participation to sustain our efforts!