The american people still ask themselves : "WHY DIDN T THEY DO ANYTHING TO PREVENT THIS MASSACRE?"

The question that I 've been asking myself from day 1 (or should I say day 11) is still the same: in what way the Bush administration and the rest of the U.S. government is involved in the september 11th attacks on the WTC? I can t answer the question and I won’t, but it’s the behavior of the government that I wish to denouce.

The Bush administration needed public consideration and the terrorist acts have acted as a miracle for G. Walker Bush and other lobbys of the governement that have been fighting to get the military production up. They were fearing a lack of partiotism, and needed to have the people focusing on foreign danger.

Why did they say at first that they had no idea of what the attacks could be like, only to admit later, little by little, that they knew much more than we all thought. Mr Tenet from the CIA had warned the US president about 5 weeks before the 11th that Ben Laden's Al-quaïda group might try to high-jack several planes, but the informations were not explicit enough for the governement to use it; Peter Franssen from CBS revealed this warning made to the president.

Other more important warnings have been made by secret services from Egypt, Israel, France, Russia, Germany, Jordan, Moroco proving the actual hypocrisy (the US government will never be accused enough of it) of the White House as Condolezza Rice stated that they had no idea of knowing that the attacks would occure on American soil, and that they couldn t know eighter about the date or about the fact that important buildings could be targetted by airplanes transformed into flying gigantic bombs.

->Germany, June 2001: warns the Cia that terrorists from the Middle-East will attepmt to highjack airline planes in order to attack themselves to IMPORTANT SYMBOLS of the USofA. (http://www.news.bbc.co.uk ; http://www.washingtonpost.com)

->Russia' president Vladimir Poutine in August 2001 asks his services to warn America that terrorists are planning great scale terrorist attaks on OFFICIAL AMERICAN BUILDINGS. As the american services didn t react, Poutine will later say that he was astonished of what the american said: "What do you want us to do?We can t do anything as the Talibans won't give us Ben Laden!" (MS-NBC's interview of Poutine: Sept 15th 2001.) I don t need to add that they didn t hesitate to later invade Afghanistan and other parts of the world in order to catch that same person, but if they’d done it then, they couldn’t have gone all the way they’ve gone today.

->The US intelligence after the 11th kept on saying that they imagined the highjacking would be of a "usual kind" (hold passengers for ransom with strong revendications), and that they couldn t guess the terrorists would use the airplanes as bombs.
The plan of using planes against buildings exists since 1995: in Philipines, near Manille, important facts were found in a house in which lived three men including Ramzi Ahmed Yousef (declared responsible of the attacks). The police found evidences of a plan to highjack 11 PLANES and to fly them through military and civilian buildings. The list of buildings INCLUDED THE WTC TOWERS.

->A member of the FBI from Arizona found out that an abnormal number of arabs were following pilote lessons and warned the Buro on the 10th of july 2001, but it was not possible to tell that they belonged to Ben Laden's organisation. A second warning more important came out on august 16th 2001, as immigration from Minnesota arrests Zacarias MOUSSAOUI (not the 1st time you hear about him), a flight instructor warned the FBI SIX TIMES about his suspect behaviour: wanting to fly boeings 747 without learning neighter how to land nor how to take off. The instructor even added : "I hope you realise that a 747 filled of fuel can be used as a bomb"
On the 26th of august, France warns the FBI that Moussaoui is linked to Ben Laden’s organisation, but the investigations won t lead to anything.
(http://www.nydailynews.com sept 17th)

The worst part comes when you try to define what country found the most advantages from these terrorist actions. The US defence budget was increased by 60 %, and no one with the least bit of economics education will have problems understanding that american economy had so much to obtain from invading Afghanistan, Philipines, Sudan, Somalia, Iraq.... Americans decieded to follow W in his war against terrorism so unjustified (the goal doesn’t justify uneffective violent military means) that demonstrations multiplied themselves in arab countries, but also all over Europ and the rest of the world. Within a few weeks or days of “chirugical” bombardments, the US army had already killed a greater amount of afgan civilian than the people who died in the WTC towers, the four planes and the penthagon all together. (not many people in there. According to Thierry Meyssan’s book:“L’Effroyable Imposture” in french, no plane actually hit it. But I’m not asking you to believe this, it’s just a detail of the whole US manipulation).

The entire concept carrying the military actions in afghanistan depended on the trust that the people had for their government. And it worked well, the people had so much trust in it (according to those damn surveys: 90% of the US pop,). But it was the worst thing that helped the worst of the US government’s ambition: no refusal from his so-called “voters” allowed Bush to extend to the rest of the world his war against his “axis of evil” and the hunt for bloody terrorists (I’ll give you my axis of evil: bush---sharon). They were suppose to punish the criminals in order for the population to feel safe again. but they just created an even greater american terrorism for the other populations of the planet.
The denomination of EVIL is actually funny, childish in a way ,but in a more important manner it shows Bush’s view of the world: the man is exactly like a kid who still see the world in black and white and who can’t really tell what’s good from bad.

And the campain against “evil” has lead the country in some kind of “US @ war-World Tour” (“coming soon near you”, they’d say). The marines are all around the world today, and even setting foot in countries we would never had imagined them to end up in. No one could have predicted that the entire planet would fold in front of the agressive american forces and their pathetic reasons. But the fact is that it is so more complicated than it seems, and that American imperialism doesn’t know any significant opposition since the collapsing of the soviet union.
The U$A now feel like they are free to do whatever they wish. They’re “the only chief on borad, after God”. So I m asking you:

WHY WOULD THE AMERCAN GOVERNMENT HAVE DONE ANYTHING TO PREVENT THESE TERRORIST ACTIONS?

The american people must now realise that their country does only protect its interests and does not play the role of the planet’s peace keeper like they’ve been told. (Most UN actions are ruined because the US representative : remember when he put his veto against sending obseravators to witness the violations of the Geneva Convention in the middle-east: it means the US didnt’t care, didn’t want to know about massacres. They can be proud of their IMMEDIAT REVISONNISM).
Americans have to look by themselves (and not wait to see it on CNN) over the boader sepearating them from their “looser neighbours”, watch the world as it is and understand the consequences of wars they’re leading for SUCH HYPOCRITE REASONS.

THIS AGRESSION ON THE WORLD POPULATION WILL NOT STAND!

Send them more help than bombs, don’t racket their oil but engage will trades with them, don’t get rid of a foreign (south-american) government only to put its population into salvation for the US economy (chikita bananas), and then maybe terrorism will stop and people will no longer dedicate their life to flying airplanes into american buildings.
The petro-banana-anti-drug-anti-terrorism wars that the US are fightin’ can only be stopped if the american people stand against them. These same people must not fear, underestimate or threat other nations otherwise there will always be terrorists around. It’s only when they will consider all other nations as equal to them and treat them with the minimum respect and consideration that the UsofA will at last be able to try to fit itself among other nations in order to give hope to all countries to finally get along.

The only way to enbetter your country is by revolutionazing it. Get rid of both bush AND THE REAL AMERICAN PRESIDENT: the military, oil companies (bad, BAD Rockfeller), monsanto and all other lobbys in control of the country manipulating the population and hurting the rest of the world. Bush Jr has of course never really been president; Georges Bush senior (who’s unpublished biography is scary) still has more influence on the government than his son. Junior Bush is neighter a commandor, nor an executant . He’s only a (dream) puppet representing a “sectary” government: Why would anyone put in charge of the country someone defeated by a tasty bretzel, who before the sept 11th didn’t know the difference between Talibans and the Cardigans rock band, and who is so famous for his ignorence and frequent luducrious declarations.

This organised governement wish they could turn every AVERAGE american into an ignorent,a true patriot,a misinformed voter, a tool of propaganda.
The isolationism of the U$A transformed the country in a form of bubble stuck on the bottom of the bathtub without any contact with the surface.The government can shape the public opinion in any way they want. Only an unsignificant minority dares criticizing it.

ATTENTION AMRICANS: IT IS TIME TO WAKE UP! Stop believing the government and use your sense of criticism at last: only the truest patriots will do what’s necessary to make its country better. In order to do so, he must fisrt aknoledge that there might be something wrong with it.

So don’t take your national security for granted and do the necessary to obtain respect from other nations with the help of peace instead of war. But more important, don’t take the world population for idiots, and don’t let yourself manipulated by your leaders with their idea of vengence for the sept. 11th events for which they’d been praying, and to which they probably collaborated.
Don’t trust them:we know where American leaders have learnt their lesson from:

I really wouldn t like that awful man to have the last words. Therefore, let me please finish with the quotation from a great man, who’s one of the biggest symbols of freedom everywhere on the planet:

"YOU CAN FOOL SOME PEOPLE SOMETIME,
BUT YOU CAN T FOOL ALL THE PEOPLE ALL THE TIME" – Robert Nesta Marley (“Get up, stand up”... for your rights!) 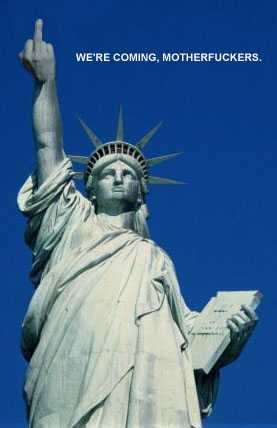