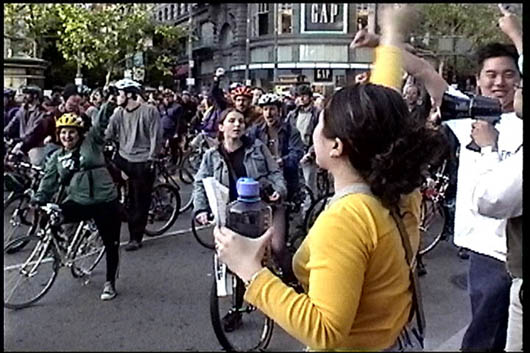 Here's a second photo of bicyclists at the demo against racist clothing. Bike lifts, fists in the air, and a lot of joy as 1,000 bicyclists rolled through and stopped in solidarity.

(Note, Critical Mass has no leaders and no stated platform, but is a spontaneous event which can take many forms and is a space for free expression. Not all who participated in the mass necessarily knew about or even supported the demonstration, but many clearly did).
Add Your Comments
LATEST COMMENTS ABOUT THIS ARTICLE
Listed below are the latest comments about this post.
These comments are submitted anonymously by website visitors.