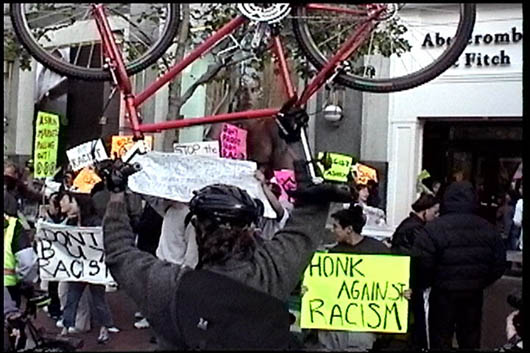 A lovely flyer passed out at the beginning of the ride invited massers to storm the freeway entrances in order to cross the Bay and participate in the Mayday kick-off event, Hip Hop in the Streets (http://www.indybay.org/news/2002/04/125122.php). While the massers didn't make it, people sure had fun trying!

The mass then turned on 8th and headed towards the infamous 8th and Bryant entrance, right at the evil axis of the CHP, SFPD, courthouse and jail. Amazingly, no police were blocking the entrance, and there were no signs prohibiting bicycles. This meant that technically it was legal to take the freeway!!! The sun was bathing the entrance sublimely, all was perfection, but wait, conflict arose: someone had passed out a map to go have a barbeque. He even had 20 pounds of meat. He was shouting for people not to go support the freeway riders. Meanwhile, the action was commencing!

A squadron of superstars sped up the onramp, and still the bilk of the massers waited in the distance. This is your golden opportunity! Stop living in the gutter breathing the fallen fumes of noxious oppression, and take the slaloming vistaduct back downtown, baybee -- or better yet, all tha way ta Oaktown!!!

Only when the CHP finally came screaming in on motorcycles did the crowd come over in full force, but were very happy to be there and performed some solidarity bike lifts. One legal observer pressed the case that the bicyclists on the freeway were there legally and although they were chased down, and one young woman's bicycle was taken temporarily, no citations were issued.

The ride went on towards barbeque land, until it became evident that it was too cold and too far -- and another freeway entrance was beckoning. The crowd was full of freeway fandanango festival feelin' and chants of "freeway, freeway!" filled the air, as well as "Mayday-Freeway!"

The journey to the freeway took too long however, it was unexpectedly far from the sign announcing it, and riders passed up a southbound entrance (wrong direction!) so the mass was foiled again by screaming careening kid-you-not 100 MPH plus CHP squad cars ripping past the crowd into oncoming traffic.

The ride went on to perform an "O-Turn" in the center of a major intersection, the first of many of the evening. Cries of "freeway" became replaced with cries of, "Taqueria!"

Riders took Mission Street from around 27th to 16th, cheering passersby and people watching from windows with, "Viva la Bicicleta!", slapping high fives with passersby and being loud and proud.

Reaching Market and Van Ness, another major O-turn commenced, but an aggressive SUV driver managed to pound into the circle before being bodily blocked by safety-conscious massers. After defusing the driver's temper with kind words and some perspectives on how the motorcar system is full of unnecessary delays which the critical mass movement is generally aiming to change, he began to smile and cheer the riders. No lie!!!

An SFPD motor patrol officer came and took the place of the corkers who had been festively blocking the bumper of mister rubber humper.

Unfortunately, a sweet young man with a big snaggle tooth thought it was fun to waddle his bike between the cop and the SUV over and over again while the bikes swirled about. At one point witnesses say he fell into the car, causing no damage. He was then arrested. The officer involved has in the past been accused of racist discrimination at Critical Mass, and also of failing to help bicyclists who were assaulted by motorists. This is a clear case of discrimination -- even if there was damage, it was clearly an accident. Rather than file an accident report, the rider was arrested. The mass was smaller by then and had mostly moved on when the arrest occurred, so people did not stop in force to protest the false arrest.

But all in all, a great ride. Photos below.

SF Critical Mass occurs on the last Friday of each month, gathering at 5:30 PM to leave after 6 PM from Justin "Pee Wee" Herman Plaza, at the foot of Market Street.

For more great events around Mayday, check the calendar at http://www.festivalsofresistance.net/