Newswire
Calendar
Features
Home
Donate
From the Open-Publishing Calendar
From the Open-Publishing Newswire
Indybay Feature
Publish to Newswire
Add an Event
Related Categories: Anti-War
Teenagers shot by Israelis, then run over with a tank
by The Independent/Robert Fisk
Friday Apr 26th, 2002 3:13 PM
After their mutilated bodies are returned, families of three teenagers struggle to understand why they attacked Jewish settlers 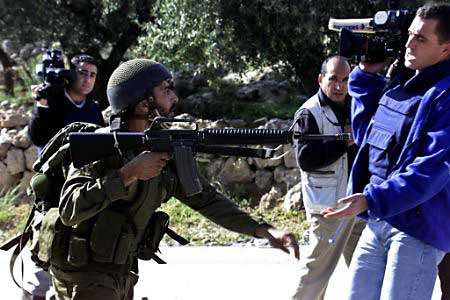 Teenagers shot by Israelis, then run over with a tank
After their mutilated bodies are returned, families of three teenagers struggle to understand why they attacked Jewish settlers

Two of the schoolboys were 14, the other was 15; they were internet surfers in the local cyber cafe, one of them idling his hours away drawing children's cartoons; all three were football enthusiasts. Hours after they had been shot dead by the Israeli army near the Jewish settlement of Netzarim, their fathers received the three young bodies. They had been driven over by an armoured vehicle which ­ in 14-year-old Ismail Abu-Nadi's case ­ cut his corpse in half.

Knife-wielding suicide bombers approaching the Jewish settlement, according to the Israeli army and, of course, The New York Times. But even Hamas, creator of the vicious Palestinian campaign of suicide bombing, admits that the three schoolchildren ­ all ninth-graders in the Salahadin School in Gaza City ­ had naively planned to attack the settlement of their own accord and with, at most, knives. It urged preachers and schoolteachers to tell children that they should never embark on such wild schemes again.

And when the three boys' fathers talked to The Independent yesterday, they told a story of waste and tragedy and childhood anger at Israel's bloody invasion of the Jenin refugee camp. "I spent all last night asking myself why my son did this,'' Mohamed Abu-Nadi told me as we sat among mourners outside his middle-class home. "Did Ismail need money? No. Did he fail at school? No. He was first in his class. Were there problems with his family or friends? No. I asked myself the same questions over and over. Why? Can you tell me?''

It's a painful question to be asked by a distraught father, a highly educated civil engineer. Did Ismail want to die? His father said this would have been impossible until "three or four months ago''. That was when the schoolboy, born in Abu Dhabi and a fluent English speaker, began to ask his father why the Palestinians were given no outside help in their struggle for a state. "He asked me: 'Why is it that only the Palestinians cannot have a state? Why doesn't America help? Why don't the other Arab states help?'."

Bassem Zaqout, the father of 15-year-old Yussef ­ none of the fathers have met, though their sons all attended the same school ­ also thought the Jenin bloodbath influenced his son.

"When I came back from evening prayers on Tuesday, he had left the house," he said. "I had no idea why. Now I think the boys were walking towards the Jewish settlement with some kind of idea of attacking the Israelis there, but he never touched a weapon. When we got his body back yesterday, it was in a terrible state. Dogs had been at it in the night and his face was unrecognisable because it had been crushed by a heavy vehicle driving over it."

Adel Hamdona's 14-year-old son Anwar was returned to him in a similar condition. The father's description was cold, emotionless. "He didn't have a face. His legs had been severed. He had been driven over several times and had been pretty well disembowelled.''

Anwar's body, too, had been gnawed by dogs. Mr Hamdona said: "He was just a boy, a child. I am a teacher at his school. At five in the evening, he told his mother he was going to an internet cafe to surf the net. When he hadn't come home by nine, I felt something was wrong. Then we heard shooting from Netzarim."

And there's a clue as to why Mr Hamdona felt that "something was wrong". For Anwar had begun talking to his family about "martyrdom". "The events here had an effect on the boy. He was always talking about the suicide operations, about martyrs and the concept of martyrdom. He used to want to become a martyr. I had a suspicion that a few years later, when he grew up, he might do this ­ but not now."

Ismail left what appears to be a farewell note to his parents. "One of his friends brought me a paper he had written," his father acknowledged after talking of his son's education and his puzzlement at the world's abandonment of Palestinians. "On the paper, Ismail had written: 'My father, my mother, please try to pray to God and to ask for me to succeed to enter Netzarim and to kill the Israeli soldiers and to drive them from our land'.

"I could not believe this. At his age, any other boy ­ and I've been to England, the United States, India, Pakistan ­ yes any other boy just wants to be educated, to be happy, to earn money, to be at peace. But our children here cannot find peace."

As for the condition of the bodies, none of the fathers wished to speculate on the reasons. Would the Israelis deliberately mutilate the bodies? It seems unlikely. Or did they, after shooting the three schoolboys, avoid the risk that one may be still alive ­ and with a bomb still waiting to go off ­ by driving over their remains? And when their bodies were crushed, were they all dead?

http://news.independent.co.uk/world/middle...
Add Your Comments
LATEST COMMENTS ABOUT THIS ARTICLE
Listed below are the latest comments about this post.
These comments are submitted anonymously by website visitors.