Add an Event
Newswire
Calendar
Features
Home
Donate
From the Open-Publishing Calendar
From the Open-Publishing Newswire
Indybay Feature
Related Categories: Palestine | Racial Justice
Teenagers shot by Israelis, then run over with a tank
by By Robert Fisk in Gaza City-http://news.indep
Friday Apr 26th, 2002 12:01 AM
Two of the schoolboys were 14, the other was 15; they were internet surfers in the local cyber cafe, one of them idling his hours away drawing children's cartoons; all three were football enthusiasts. Hours after they had been shot dead by the Israeli army near the Jewish settlement of Netzarim, their fathers received the three young bodies. They had been driven over by an armoured vehicle which ­ in 14-year-old Ismail Abu-Nadi's case ­ cut his corpse in half. 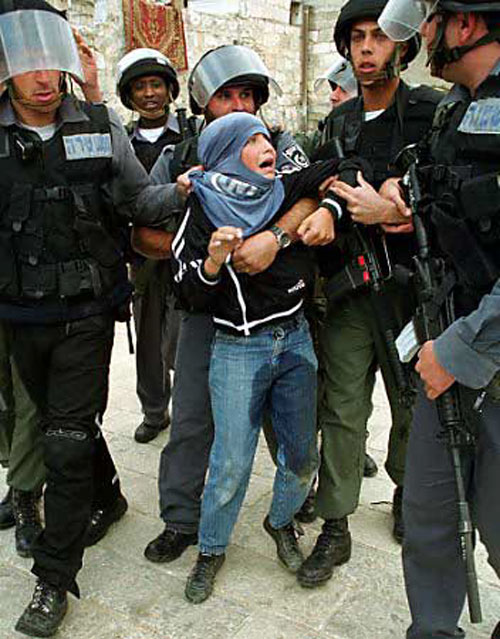 Knife-wielding suicide bombers approaching the Jewish settlement, according to the Israeli army and, of course, The New York Times. But even Hamas, creator of the vicious Palestinian campaign of suicide bombing, admits that the three schoolchildren ­ all ninth-graders in the Salahadin School in Gaza City ­ had naively planned to attack the settlement of their own accord and with, at most, knives. It urged preachers and schoolteachers to tell children that they should never embark on such wild schemes again.

And when the three boys' fathers talked to The Independent yesterday, they told a story of waste and tragedy and childhood anger at Israel's bloody invasion of the Jenin refugee camp. "I spent all last night asking myself why my son did this,'' Mohamed Abu-Nadi told me as we sat among mourners outside his middle-class home. "Did Ismail need money? No. Did he fail at school? No. He was first in his class. Were there problems with his family or friends? No. I asked myself the same questions over and over. Why? Can you tell me?''

It's a painful question to be asked by a distraught father, a highly educated civil engineer. Did Ismail want to die? His father said this would have been impossible until "three or four months ago''. That was when the schoolboy, born in Abu Dhabi and a fluent English speaker, began to ask his father why the Palestinians were given no outside help in their struggle for a state. "He asked me: 'Why is it that only the Palestinians cannot have a state? Why doesn't America help? Why don't the other Arab states help?'."

Bassem Zaqout, the father of 15-year-old Yussef ­ none of the fathers have met, though their sons all attended the same school ­ also thought the Jenin bloodbath influenced his son.

"When I came back from evening prayers on Tuesday, he had left the house," he said. "I had no idea why. Now I think the boys were walking towards the Jewish settlement with some kind of idea of attacking the Israelis there, but he never touched a weapon. When we got his body back yesterday, it was in a terrible state. Dogs had been at it in the night and his face was unrecognisable because it had been crushed by a heavy vehicle driving over it."

Adel Hamdona's 14-year-old son Anwar was returned to him in a similar condition. The father's description was cold, emotionless. "He didn't have a face. His legs had been severed. He had been driven over several times and had been pretty well disembowelled.''

Anwar's body, too, had been gnawed by dogs. Mr Hamdona said: "He was just a boy, a child. I am a teacher at his school. At five in the evening, he told his mother he was going to an internet cafe to surf the net. When he hadn't come home by nine, I felt something was wrong. Then we heard shooting from Netzarim."

And there's a clue as to why Mr Hamdona felt that "something was wrong". For Anwar had begun talking to his family about "martyrdom". "The events here had an effect on the boy. He was always talking about the suicide operations, about martyrs and the concept of martyrdom. He used to want to become a martyr. I had a suspicion that a few years later, when he grew up, he might do this ­ but not now."

Ismail left what appears to be a farewell note to his parents. "One of his friends brought me a paper he had written," his father acknowledged after talking of his son's education and his puzzlement at the world's abandonment of Palestinians. "On the paper, Ismail had written: 'My father, my mother, please try to pray to God and to ask for me to succeed to enter Netzarim and to kill the Israeli soldiers and to drive them from our land'.

"I could not believe this. At his age, any other boy ­ and I've been to England, the United States, India, Pakistan ­ yes any other boy just wants to be educated, to be happy, to earn money, to be at peace. But our children here cannot find peace."

As for the condition of the bodies, none of the fathers wished to speculate on the reasons. Would the Israelis deliberately mutilate the bodies? It seems unlikely. Or did they, after shooting the three schoolboys, avoid the risk that one may be still alive ­ and with a bomb still waiting to go off ­ by driving over their remains? And when their bodies were crushed, were they all dead?

First: Where are all those IMC censors complaining that this is just a reposted story? Oh yeah...I forgot. They only complain when the story takes a differing opinion. If it complies with their ideology than it is fine. Or is it OK because the newspaper that this was taken from is called the "Independent". I hate to burst your collective bubble, but indepedent does not mean "altrenative reporting". Just take a look at all of the ads on the site, and you will know.

Second: Having read the article, I must admit that there is no proff that this event even occurred. As much as it would be nice for journalists, it is not proper research practice to take the story from one person and run with it. Especially when that person is not even close to resembling an objective source. There was no attempt by the jounalists to corraborate this claim, nor is there any independent research done by the reporting newpaper. How Ironic!

You know Chris, I think you must be right. This was just made up. It's just fantasy, all of it. So is the photo. Someone just doctored that up in Photoshop or something.

Because, you know, The Independent isn't a real newspaper, and Robert Fisk isn't a real journalist.
Add a Comment
§Hmm
by Pat Kincaid (laughter [at] aol.com)
Friday Apr 26th, 2002 11:37 AM
Let's see, Hamas, along with the rest of Palestinan society glorifies suicide bombers, plastering their faces everywhere on posters, dressing their children up like them.

Now I'm shocked, SHOCKED that kids are trying to emulate them. It sure is a good thing that Hamas now says that kids shouldn't do what the adults are doing. It will no doubt be as effective as an anti-smoking campaign.

Add a Comment
§Serious but Not Desperate
by Foolishness
Friday Apr 26th, 2002 1:35 PM
One of the urban myths of the Middle East war is that Palestinian suicide-murderers are acting out of "desperation"--that because the Palestinian territories do not enjoy full sovereignty, they have little alternative but to blow themselves up. It makes little sense; who would give his life for a bloodless abstraction like national sovereignty?

Today's New York Times carries further evidence that the "desperation" explanation is nonsense: Some Arabs from Egypt, a country that has been free of all Israeli occupation for more than two decades, are also eager to become "martyrs."

Early last week 23-year-old Milad Mohammed Hemeida "strode past Egyptian guards near the border with Israel, scattering them with a warning: 'If anyone comes near me,' he said, 'I will blow myself up.' " The account continues:

Mr. Hemeida kept going, security officials said, straight into the narrow no man's land that separates the two countries. From the other side, Israeli soldiers ordered him to stop, then fired over his head. "God is great!" Mr. Hemeida shouted back in Arabic.

One of the Israeli soldiers fired again, felling the young man with a single shot.

Mr. Hemeida was not carrying any explosives, officials said. But since his death the following day, he has been celebrated in Egypt as the first in a new line of Arab martyrs to the Palestinian cause. . . .

Within days, the quiet, sensitive young man was already becoming lost in myth.

Opposition newspapers hailed Egypt's "first martyr to the Palestinian cause." Teachers voted to rename a local school in his honor. "He was born the day he died," said a cousin, Gubr Abu Sheeba.

"This is about a new culture emerging in the Arab world," a Palestinian scholar tells the Times. "It is not Islamist or pan-Arab; it has to do with a new sense of dignity among young people in the Arab world who identify with the suffering of the Palestinians."

A culture that encourages young people to blow themselves up is neither dignified nor desperate; it is merely depraved. 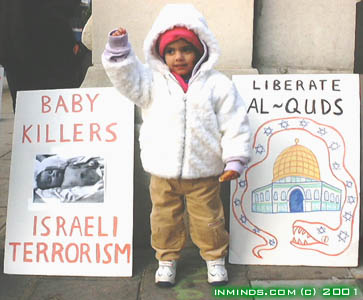 This is the story I posted with a different picture. The Zionist pig agitators are trying to take over this site ever since Berkeley. If they want war in the US, too, let them continue their fascist bullshit. The fucking Zionists have provoked MANY PEOPLE ALL OVER THE WORLD! Now they will suffer for their crimes.
Add a Comment
§israeli weapons never seized
by pragmatic
Monday Apr 29th, 2002 3:49 PM

Israel
Weapons of Mass Destruction Capabilities and Programs1
Nuclear2 Sophisticated nuclear weapons program with an estimated 100-200 weapons, which can be delivered by ballistic missiles or aircraft.
Nuclear arsenal may include thermonuclear weapons.
150MW heavy water reactor and plutonium reprocessing facility at Dimona, which are not under IAEA safeguards.
IRR-1 5MW research reactor at Soreq, under IAEA safeguards.
Not a signatory of the NPT; signed the CTBT on 9/25/96.

Chemical3 Active weapons program, but not believed to have deployed chemical warheads on ballistic missiles.
Production capability for mustard and nerve agents.
Signed the CWC on 1/13/93, currently debating its ratification.

Biological4 Production capability and extensive research reportedly conducted at the Biological Research Institute in Ness Ziona.
No publicly confirmed evidence of production.
Not a signatory of the BTWC.


Sources:
This chart summarizes data available from public sources. Precise assessment of a state's capabilities is difficult because most weapons of mass destruction (WMD) programs remain secret and cannot be verified independently. 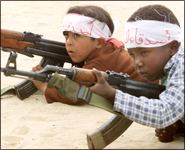 I'm sure the father of the young terrorist was SO surprised...
Add a Comment
§Terrorist-camps for children
by Alex
Wednesday May 1st, 2002 2:39 AM 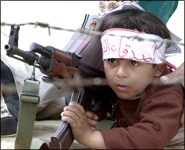 How the palestinians train their children for peace. By the way: these pictures were taken before the outbreak of the second intifada, while the peace process was underway.
Add a Comment
Support Independent Media
We are 100% volunteer and depend on your participation to sustain our efforts!