Add an Event
Newswire
Calendar
Features
Home
Donate
From the Open-Publishing Calendar
From the Open-Publishing Newswire
Indybay Feature
Related Categories: Health, Housing & Public Services
City Hall Homeless Vigil needs solidarity
by almost
Sunday Mar 10th, 2002 3:30 PM
Homeless advocates are continuining the rally into a vigil through the night in front of city hall by the plaza until: tomorrow the Board of Supervisors meets to hear legislation on housing
Homeless advocates are rallying on the heels of the Homeless Summit, Thursday March 7, which was called by Supervisor Chris Daly. 750 people gathered to organize proactively for affordable housing, and against any attempt to criminalize homelessness.

At a rally from 12-3 Sunday, they heard from homeless, poets. Now they have erected a home and will vigil till tomorrow. Join us.
Add Your Comments
§Erected home picture
by Eric Johnson
Tuesday Mar 12th, 2002 8:30 AM 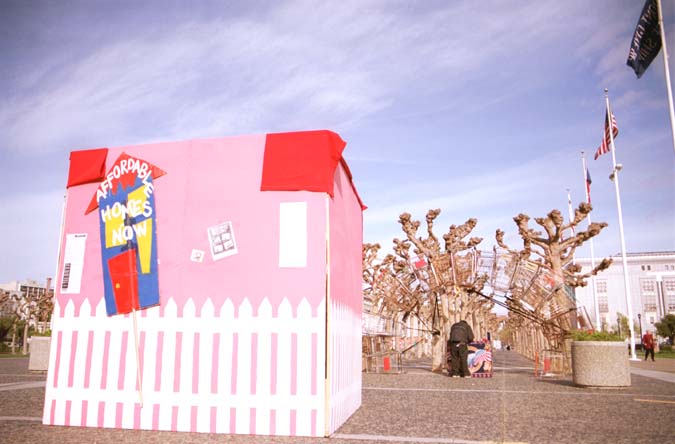 Add a Comment
§Wish i was there
by deanne (random_rabbits [at] 37.com)
Wednesday Mar 13th, 2002 6:28 PM
Its about time they did something about the
lack of affordable housing here. I am from the Bay
Area and in the last year have slept in parks,
relatives, beaches, etc. because I don't want to
waste away in my mom's garage or some over
priced rented room. I am now here again in the
area going to school at community college, and
once again face $900 rooms. Well, looks like I'd
either
a) take out a loan
b) borrow from my relatives
c) live in a van
d) leave the state
luckily I am a female, quiet, non-smoker, as people
renting out rooms are very prejidiced. Why do
we have to live this way? I wonder what to do now.
Dea
Add a Comment
Support Independent Media
We are 100% volunteer and depend on your participation to sustain our efforts!